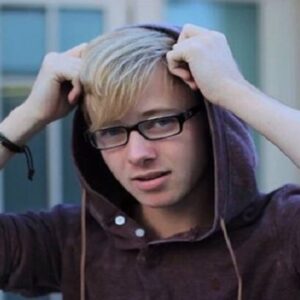 Sam Golbach, the fair-haired member of the dynamic duo “Sam and Colby,” is the other half of the pair. Sam made a name for himself at Vine with the help of former classmate and current roommate Colby Brock. Through their prank videos on the platform, which offered short-format video hosting, the two became rather well-known. Sam, like many others in his generation, has built a living by creating humorous, user-friendly short films that are shared on the Vine app. Sam transferred his impressive skills to YouTube after Vine closed down, where he continued to produce prank films. He moved his platform recently, and since then, he has garnered about 73K subscribers. His Instagram account, which has over 274K followers, is a favorite among his fans for giving them insights into his charmed existence. Even his Twitter updates are humorous, and his 87.6K followers keep up with all of his jokes there. Sam has his fair share of income and also makes a living by appearing in commercials and advertisements thanks to the affection of his fans and the popularity of his videos on social media platforms. After graduating from high school, he and his partner/friend Colby relocated to Los Angeles in order to improve their fledgling professions.

Sam Golbach and his friend Colby started brainstorming while they were still in school about how to make a series of videos that would shock people and keep them watching. These were all prank recordings that essentially showed the pair making havoc in a variety of locations, including a mall, a nearby Target, and a park fountain. They started recording these practical jokes on their phone camera, keeping them succinct and funny, and sharing them on Vine.

They quickly gathered a sizable fan base, with one of their films, “Following Fat People,” setting a record with 10 million views! Sam followed different shoppers while playing the saxophone in the video, frequently getting a verbal beating from their targets. The account has 5,000–6,000 Vine followers per day during the summer of 2014.

More than 1.6 million people were fans of them by the time Vine was shut down. Sam next made his way to YouTube, where he continued to produce prank videos and posted his own vlogs on a variety of topics.

Why Sam Golbach Is So Unique?

Sam Golbach has a great sense of humor together with an adorable appearance, which is what makes him so unique. He has an endearing boy-next-door charm that is both humorous and quirky. The girls are drooling over him because of his blue eyes and wild blonde hair; some of them are even putting on dramatic shows just to get a glimpse of him.

His elaborate and hilarious practical jokes show a sharp mind behind the whole thing. Sam is also concentrating on turning his other life passion—teaching—into a reality. Sam and Colby founded The Life Project, which has been covered by news organizations like “BBC,” “Huffington Post,” and others. The Life Project aims to teach people how to develop healthier life skills through entertaining films.

Social media police have been looking into Sam and Colby’s postings, which they frequently label as being disruptive, childish, and offensive. While certain groups of individuals objected to titles like “Following Fat People,” disruptive antics like hiding a couch in the elevator led to their expulsion from the specific Oak Park mall.

Sam was the victim of a prank pulled on him by fellow YouTuber Sam Pepper in November 2015, in which Colby, Colby’s best buddy, was pretending to be kidnapped and shot in the head. The media criticized that video heavily for disseminating unfavorable images online. Sam has altered his social media motto to “upward and upward” with the intention of emphasizing the positive sides of life as opposed to only tricks and mischief.

Sam is from Leewood, a small community in Kansas, the United States. Sam has an older sister named Allison and was raised by Cindy and Kirk, who were incredibly supportive. Together with his close friend Colby, he attended Blue Valley High School. Late in 2015, he relocated to Los Angeles to concentrate on his career. Sam introduced Katrina Stewart, a rising vocalist, in a video that was posted in January 2017.

Popular social media personality Sam Golbach is a native of Kansas in the United States. He is thought to be worth $1.5 million.