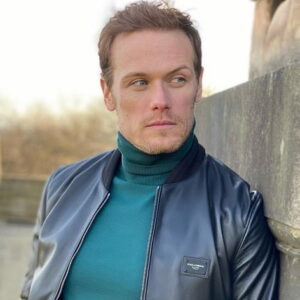 Sam Heughan is a Scottish actor, producer, novelist, and entrepreneur best known for his role as Jamie Fraser in the Outlander television series. He racked up a sizable fan base and a slew of prizes as a result of the series. In 2020, he also became a producer on the show, producing twelve episodes. He started his career on stage and received praise for his efforts in the Outlying Islands. With the miniseries Island At War, he made his television debut. He has appeared in a number of productions since then, including the television series Doctors and the television movie A Princess for Christmas. The Spy Who Dumped Me and Bloodshot are among his film credits. He appeared on stage in Romeo and Juliet and Batman Live (played Batman). Heughan has also lent his voice to a video game, developed his own whiskey brand The Sassenach, co-authored a book with Outlander co-star Graham McTavish called Clanlands: Whisky, Warfare, and a Scottish Adventure Like No Other, and founded his own charity fundraising My Peak Challenge.

Sam Heughan, the youngest son of his parents, was born on April 30, 1980 in Balmaclellan, Dumfries and Galloway, Scotland. Cirdan, his older brother, and he were both named after characters from The Lord of the Rings. His father abandoned the family when he was a child, and his artist mother, Chrissie Heughan, raised him and his two brothers on her alone.

Sam Heughan received his education at Kells Primary School in New Galloway before moving to Edinburgh for a year to study at James Gillespie’s High School. He then transferred to Rudolf Steiner School, where he attended until the end of his sixth year. He returned to Glasgow after two years of travel and labor to join the Royal Scottish Academy of Music and Drama (now the Royal Conservatoire of Scotland). He appeared in plays such as Twits, The Seagull, Prometheus Bound, and Romeo and Juliet during his tenure there. He received his diploma in 2003.

Sam Heughan had the opportunity to work in Scottish writer David Greig’s play Outlying Islands while in his second year of theater school in 2002. He received a lot of praise for the play, which he did for a year and a half. After that, he relocated to London, where he was cast in the WWII epic drama miniseries Island At War in 2004. He portrayed spy Philip Dorr in this film.

Sam Heughan portrays Livingston FC footballer Andrew Murray in three episodes of the Scottish serial series River City in 2005. In David Harrower’s piece Knives in Hens, he plays Pony William, an adulterous husband. He played the real-life figure John Tunstall, the first man murdered in the Lincoln County War, in an episode of the miniseries The Wild West in 2006.

In 2007, he starred as Edward McNally in Channel 4’s television film A Very British Sex Scandal and appeared in single episodes of the crime drama Midsomer Murders and the detective thriller Rebus. He also appeared in two episodes of the drama Party Animals. He played Tom Veryan in The Vortex, Guildenstern/Fortinbras in Hamlet, and Roderick/Eddie the Gaffer in The Pearlfisher in the same year.

Sam Heughan appeared in several theatrical performances between 2008 and 2010, including Romeo and Juliet, Macbeth (both 2008), Plague Over England (2009), and The Talented Mr. Ripley (2010). In 21 episodes of the BBC daytime serial drama Doctors, he played Scott Nielson, a recurrent character (2009). In the same year, he starred in the BBC4 television film Breaking the Mould as Charles Fletcher, the first doctor to deliver penicillin to a patient.

In 2010, Sam Heughan starred in the BBC Two television film First Light, in which he played Geoffrey ‘Boy’ Wellum, the youngest ever Spitfire pilot, and in the BAFTA award-winning drama Any Human Heart. He played Lieutenant McStay in the latter, which was based on William Boyd’s 2002 novel of the same name.

In 2010, he landed the lead part in Young Alexander the Great, a direct-to-video action-adventure picture. He also played Hugh Tennent, the founder of Tennent’s Lager, in a series of hilarious ads. The commercial went on to become very well-known and even win awards.

In 2011, Sam Heughan was cast as Prince Ashton of Castlebury in A Princess for Christmas, a made-for-television romantic comedy drama film. Aside from that, he played Olympic swimmer Max in Steve Waters’ play Amphibians for two years and also played the iconic comic hero Batman in the touring performance Batman Live. In 2012, he starred in the principal role of Shakepeare’s King John at Glasgow’s Ran Mór Theatre.

Sam Heughan was cast in the lead character of Jamie Fraser, a highland warrior, in Starz’s enormously popular time-travel drama series Outlander in 2013. The sitcom, which debuted in 2014, made him a household name and earned him nominations and victories at numerous award shows.

Outlander, based on Diana Gabaldon’s novel series, has five seasons left to air till 2020. In 2020, Sam Heughan also took on the role of producer for twelve episodes of the show.

Sam Heughan starred in the drama mystery thriller Emulsion in 2014, in which he played Ronny Maze, a man trying to come to terms with his wife’s mysterious disappearance. In the same year, he starred in the comedic drama film Heart of Lightness as Lyngstrand. In 2016, he starred as Jacob in Adam Sigal’s independent comedic drama film When the Starlight Ends, and he was also named the first worldwide brand ambassador for Barbour, an English apparel company.

In 2018, he played Sebastian Henshaw in The Spy Who Dumped Me, an action-adventure comedy drama film. He also voiced Mirror Master in the Warner Bros. computer game Lego DC Super-Villains and appeared as himself in an episode of BBC Two Scotland’s sports show The Adventure Show throughout the year.

He launched The Sassenach, his own whisky brand, in 2020. At the 2020 San Francisco World Spirits Competition, the brand won a double gold award. Sam Heughan reprised his role as Corporal Jimmy Dalton in Bloodshot, a sci-fi action superhero film based on heroic comic characters, in 2020. In the same year, he collaborated on a book with his Outlander co-star Graham McTavish, Clanlands: Whisky, Warfare, and a Scottish Adventure Like No Other. The book was well-received, and it quickly rose to the top of the New York Times bestseller list. It was made into a companion book for the documentary Men in Kilts: A Roadtrip With Sam and Graham, which aired on TV in 2021. The duo take viewers on a road trip to understand Scotland’s rich and complex legacy in this eight-part Starz channel series. Sam Heughan starred as actor Paul Newman in the biography film To Olivia in 2021 and as Tom Buckingham in the action thriller SAS: Red Notice in 2022.

Sam Heughan has launched his own philanthropic organization, My Peak Challenge, an online fitness program that helps members reach personal objectives while also generating funds for a good cause. He is also a strong supporter of Bloodwise, a blood cancer charity, and was elected Scotland President in 2016.

As of right moment, Sam Heughan’s net worth is 5 million dollars.