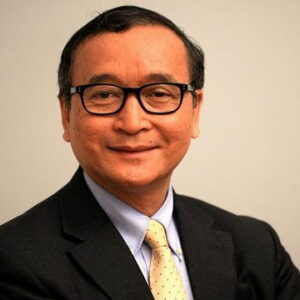 Sam Rainsy is one of Cambodia’s most internationally renowned politicians and pro-democracy activists. Rainsy was born into a powerful family in his homeland’s capital, where he grew up alongside the future king and several political figures. After his country was attacked and the administration was thrown into disarray, Rainsy and his family were forced to flee to Europe. He was a hardworking student who attended a number of elite schools. He applied his education to the fields of finance and economics, where he quickly rose to prominence. The political situation in his hometown had settled, and he was able to return home and engage in government. He returned to exile in Europe after the winds of revolution blew once again. He was able to return to his homeland after several convictions and allegations were followed by royal pardons, allowing him to become the backbone of a democratic opposition to the ruling party’s misrule. He was allowed to push for democracy and financial openness after high-level intervention by international leaders, though not without opposition from ruling forces. Despite his advanced age, Rainsy remains a staunch champion of freedom in his homeland and intends to transform his country into a fully functional democratic republic under his political leadership.

Sam Rainsy was born in the Cambodian capital of Phnom Penh on March 19, 1949. His father, Sam Sary, had served as Cambodia’s Deputy Prime Minister in the 1950s. In Em was the name of his mother.

His family migrated to France in 1965 after his mother was detained and his father went missing following official accusations that he was implicated in an attempted coup. Before entering the famous ‘Lycee Janson de Sailly high school, he attended primary school in Paris, France.

In 1979, he graduated from the ‘French Ministry of Education’ with a degree in accounting. He received a ‘Master of Business Administration’ from INSEAD in Fountainebleau, France, the following year.

Prince Norodom Ranariddh chose him to be his European representative in 1989. He worked as an investment banker in France for a short time before starting his own accounting firm.

Rainsy joined Cambodia’s ‘Funcincpec Party’ in 1992. He was elected to the Cambodian Parliament a year later, representing Siem Reap Province, and served for two years.

Between September 24, 1993 through October 24, 1994, he served as Cambodia’s Minister of Economy and Finance.
After a vote of no confidence in 1994, he was ousted from the ‘Funcincpec Party.’ A year later, he created the ‘Khmer Nation Party.’

He was injured in a grenade attack at a political demonstration in 1997. The incident claimed the lives of nearly sixteen individuals and injured over a thousand others.

He was elected as a ‘Member of Parliament for Kampong Chan Province’ in 1998, a position he still holds. He renamed the ‘Khmer Nation Party’ to the ‘Sam Rainsy Party’ the following year.
He fled Cambodia in 2005 and was tried in his absence on a number of defamation counts, receiving an 18-month sentence.

He was charged with racial incitement and property destruction on October 25, 2009, after spearheading a rally near the Cambodian-Vietnamese border.

He fled Cambodia for France on January 1, 2010, and an arrest warrant was issued for him. He left the ‘Sam Rainsy Party’ two years later to become the head of the ‘Cambodia National Rescue Party.’

Rainsy’s English-language autobiography, ‘We Didn’t Start the Fire: My Struggle for Democracy in Cambodia,’ was published in 2013. In the same year, he went on a fundraising tour in the United States to help fund his political career in Cambodia.

Rainsy was pardoned by King Norodom Sihamoni in July 2013, and he returned to Cambodia a week later.
Despite not voting in the 2013 election, he was recognized as a member of parliament in 2014 following a lengthy negotiation with many political parties in Cambodia. He was appointed as the parliament’s ‘Minority Leader,’ a post he still occupies.

While his homeland of Cambodia struggles with coups, revolutions, invasions, and regicide, Sam Rainsy is a globally known advocate for democracy, capitalism, and government fairness.

Patrice Sam, Muriel Sam, and Rachel Sam are the three children of Sam Rainsy and his wife Tioulong Saumura, whom he married in 1971.

Sam is one of the wealthiest politicians and one of the most popular. Sam Rainsy’s net worth is estimated to be $2 million, according to Wikipedia, Forbes, and Business Insider.

This well-known political figure is a Buddhist who claims Chinese descent for himself and his wife. He claims to have escaped numerous murder attempts, even while in exile in France.

He is trilingual, speaking Cambodian, French, and English. He publicly declared that his home country of Cambodia is a “mafia state.”