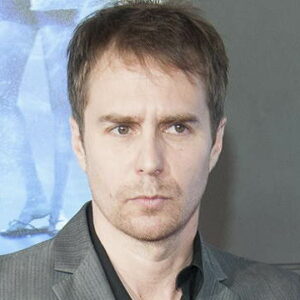 Sam Rockwell is an American actor best known for his roles in the movies Seven Psychopaths, Cowboys & Aliens, and Confessions of a Dangerous Mind. He was born in Daly City, California, and showed an early interest in acting. At the age of ten, he made his stage debut. At the age of twenty, he made his film debut, playing a significant role in the film ‘Clownhouse’. The film was about three insane patients who attack three little brothers, posed as clowns. In the early 1990s, he performed largely in TV shows in guest parts. He came to popularity after he performed a significant role in the comedic drama film ‘Box of Moonlight’ and the lead role in ‘Lawn Dogs’. The latter won him two Best Actor honors at two film festivals. More recently he has been seen in key roles in films, such as ‘Seven Psychopaths’ and ‘The Way, Way Back’. In acknowledgment of his great performances, Sam Rockwell has been recognized at various film festivals such as the ‘Montreal World Film Festival’ and the ‘Sundance Film Festival’.

Sam Rockwell was born in Daly City, California, on November 5, 1968. Both his mother Penny Hess and father Pete Rockwell were actors. When Sam was still pretty young, they got divorced.
At the young age of 10, he made his theatrical debut in a play that also starred his mother.

Rockwell spent some time studying at the San Francisco School of the Arts. He left school, nevertheless, before receiving his diploma. Later, his parents put him in “Urban Pioneers,” an educational program modeled after Outward Bound, where he excelled.

Sam Rockwell’s appearance in the 1989 horror movie “Clownhouse” served as his movie debut. He portrayed one of the three brothers who are attacked by a group of three insane people who are dressed as clowns. Victor Salva was the film’s director. He largely played guest appearances in TV programs like “Law & Order” and “Lifestories: Families in Crisis” throughout the following several years.

After appearing in supporting roles in movies like “Somebody to Love” (1994), “Glory Daze” (1995), and “Mercy” (1995), he rose to prominence after taking the lead in the comedy-drama “Box of Moonlight” in 1996. Tom DiCillo was the director. He was also well-liked for his part in John Duigan’s movie “Lawn Dogs,” which he also directed.

In the late 1990s, he also acted in the films Jerry and Tom (1998), The Green Mile (1999), and Galaxy Quest (1999). In the 2002 movie “Confessions of a Dangerous Mind,” he had one of his most major main roles. The George Clooney-directed movie was about renowned game show presenter and producer Chuck Barris.

Despite the movie’s poor box office performance, critics lauded Rockwell’s performance. At the 2003 Berlin International Film Festival, the film earned him the Silver Bear for Best Actor.
His appearances in movies like “Choke,” “The Assassination of Jesse James by the Coward Robert Ford,” and “Matchstick Men” (2003) helped him gain more fans (2008).

In the 2009 science fiction movie “Moon,” Sam Rockwell received praise for his portrayal. The Duncan Jones-directed movie won high marks from critics. Commercially, it was a mediocre success. It received a BAFTA Award nomination for Best British Film as well.

In the 2010 legal drama movie “Conviction,” he had a pivotal role. The Tony Goldwyn-directed movie was based on a true story of a lady fighting to release her unfairly imprisoned brother. Even though it received mainly favorable reviews, the movie was a commercial flop. Several accolades and nominations were given to Rockwell for his performance. In the same year, he also made an appearance in “Iron Man 2.”

Additionally, well-received was Rockwell’s performance in the 2012 movie “Seven Psychopaths.” The Martin McDonagh-directed movie was a financial hit. In the ensuing years, he made appearances in movies like “The Way, Way Back” (2013), “Mr. Right” (2015), and “Don Verdean” (2015).
In the animated online series “F is for Family,” he has been lending his voice since 2015.

One of Sam Rockwell’s most important performances in his career was his part in the 2010 legal drama “Conviction.” Hilary Swank, Minnie Driver, Melissa Leo, Peter Gallagher, and Juliette Lewis all acted in the Tony Goldwyn-directed movie. The movie was based on the true account of a single mother named Betty Anne Waters who battled to rescue her brother Kenny after he had been falsely convicted of murder. Despite the movie’s commercial failure, it received favorable reviews.

For his part in the 2013 comedy-drama movie “The Way, Way Back,” Rockwell has also become very well-known. The movie, which was co-directed by Nat Faxon and Jim Rash, also starred Maya Rudolph, Toni Collette, Steve Carell, Allison Janney, and Anna Sophia Robb.

A fourteen-year-old boy and his family were the main characters in the novel. The movie was a box office hit, making more than four times its original investment. Additionally, critics gave it favorable ratings.

He won the “Hollywood Film Award” for “Supporting Actor of the Year” in 2010.
At the Boston Film Festival, his performance in the movie “Conviction” earned him the Best Actor trophy.

For his function in the 2013 movie “A Single Shot,” he was also honored with the Best Actor Award at the Newport Beach Film Festival.

The actor Sam Rockwell has never been wed. He began dating the actress Leslie Bibb in 2007.