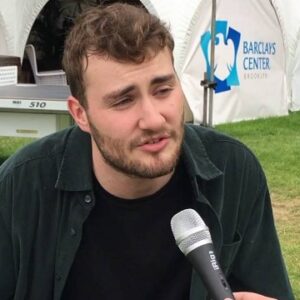 Sam Wills, popularly known as ‘Tape Face’ and ‘The Boy with Tape on His Face,’ is a New Zealand prop comedy, mime, and busker. He began his career as a performer at the age of 13 and has since been in a number of road shows, concerts, and festivals. His performances at the World Buskers Festival and the New Zealand International Comedy Festival are noteworthy. Wills has also made appearances on television. During the three seasons of TV2’s ‘Pulp Comedy,’ he was a regular performer. On the 11th season of ‘America’s Got Talent,’ he was also a finalist. In terms of awards, the comedian has won numerous awards at various comedy festivals. At the 2002 New Zealand International Comedy Festival, he earned the ‘Best Marketing Award.’ He’s also the proud recipient of New Zealand’s highest comedic prize, the ‘Billy T Award.’ In addition, at the World Buskers Festival and the Melbourne Comedy Festival, he received the ‘People’s Choice’ Award as well as the ‘Groggy Squirrel Readers Award.’ Wills was even honored by the Variety Artists Club of New Zealand with the ‘International Achievement Award.’

At the age of 13, Sam Wills began his career as a performer. He featured in a number of corporate events and private gatherings until 2001, as well as on television, where he hosted weekly comedy nights. He moved to Auckland in 2002 to work as a comic in a casino. He hosted his weekly show, ‘NCB Comedy Hour,’ there. Three years later, he was the Late Club’s MC at the Auckland Festival. He also performed at the World Buskers’ Festival that year. Wills also appeared on TV2’s ‘Pulp Comedy’ on a regular basis.

Then, in 2008, he performed at the Melbourne Comedy Festival with his act “The Boy with Tape on His Face.” Following that, in August 2011, the ambitious comedian performed at the first BBC Comedy Prom, which was hosted at London’s Royal Albert Hall. Wills made an appearance on Jason Manford’s ‘Comedy Rocks’ the same year. The New Zealander auditioned for ‘America’s Got Talent’ in 2016. (Season 11). He went on to become one of the show’s finalists.

Sam Wills was born in New Zealand on August 28, 1978. He received his diploma in New Circus from the Christchurch Polytechnic Institute of Technology’s Circus School, where he learned juggling. In 2007, he met Felicity Redman, who would become his future wife. The couple staged a “symbolic wedding” two years later to kick off the 2009 World Buskers Festival. Later, in England, they had their legal wedding. Wills’ son, Rafferty Basil Danger Wills, was born in January 2013 to Redman. In 2017, the couple divorced.