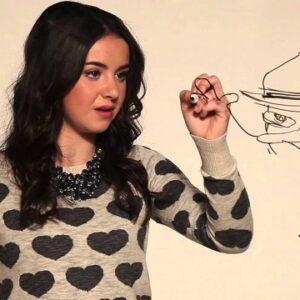 Sarah Gilman is an American actress who is best known for her roles in the television series ‘Marvin Marvin’ and the Disney Channel sitcom ‘I Didn’t Do It.’ In ‘I Didn’t Do It,’ her portrayal of an outspoken, quirky, and eccentric adolescent was well received by the audience, establishing the girl as an up-and-coming star to watch. Sarah has a lot of acting experience despite her young age, having started her career in theatre at a young age. She garnered notoriety for her performances in musicals such as ‘The Chronicles of Narnia,’ ‘You’re a Good Man,’ ‘Charlie Brown,’ and ‘Alice.’ Her early success as a stage performer inspired her to continue her career and branch out into cinema and television. After appearing in minor roles in a number of television shows, the young actress landed the largest role of her career thus far: Delia Delfano in the Disney Channel sitcom ‘I Didn’t Do It!’ Sarah is a student at the University of Southern California, where she studies film production, screenplay, and theatre, in addition to being an actress.

Sarah Gilman’s passion for the performing arts began when she was a small child. Her parents were aware of her abilities and encouraged her to pursue acting. Sarah, who was confident, attractive, and born with an innate knack for acting, quickly found herself on stage, performing minor roles in theater performances.

She was offered prominent roles in musicals and plays such as “You’re a Good Man,” “Charlie Brown,” and “Alice” as her acting career progressed. She quickly moved into the world of television, appearing in minor/guest roles in shows such as ‘Up All Night’ and ‘Marvin Marvin.’ ‘I Didn’t Do It,’ a Disney adolescent sitcom, offered her the lead part of Delia Delfano in 2013. For the young actress, being cast in a Disney play was a dream come true, and she gave it her all.

Her efforts were recognized, and she received high appreciation for her portrayal of Delia, who was quirky, loud-mouthed, and eccentric. Sarah Gilman’s international fame was boosted by this portrayal, which secured her status as a well-known young star in Hollywood. She has also appeared in a couple short films in addition to her television career.

Sarah Gilman was born in Los Angeles, California, on January 18, 1996. Her parents encouraged her to pursue her dream of becoming an actress when she was young. She attended Flintridge Preparatory School and graduated with honors, earning the status of Advanced Placement Scholar. She had a diverse personality and excelled in a variety of school sports, including volleyball, water polo, basketball, softball, and soccer.

She graduated from high school in 2014 and went on to pursue film production, screenplay, and theatre at the University of Southern California. On the romantic front, it is widely assumed that she is dating Bradley Steven Perry, a fellow Disney star, however she neither acknowledges nor denies this.

She is close to her parents and stated in an interview that she would never date a man who her parents did not approve of because she trusts her parents’ judgment and knows that they would only approve of individuals who are truly worthy of their daughter. She is an avid animal lover who keeps two pugs, four cats, two turtles, and a parakeet as pets at home.

Sarah Gilman, a well-known TV actress, has a net worth of $1-5 million, according to Wikipedia, Forbes, IMDb, and other online sites. She made her money as a professional television actress. She is from California.