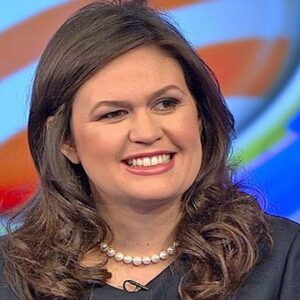 Sarah Huckabee Sanders, the youngest of Mike and Janet Huckabee’s three children, was born on August 13, 1982. David and John are her two brothers.
Her father served as the 44th Governor of Arkansas from 1996 to 2007. He is an American politician, commentator, singer, author, and Christian clergyman. In 2008 and 2016, her father ran for President of the United States of America as a Republican candidate.

Janet Huckabee, her mother, is a US politician who ran for Arkansas Secretary of State in 2002 as the Republican Party’s nominee.
In Little Rock, Arkansas, Huckabee Sanders attended ‘Little Rock Central High School.’ She went on to Ouachita Baptist University in Arkadelphia, Arkansas to further her education.

Sarah Huckabee Sanders’ political career began in 2002, when she worked as a field coordinator for her father, Mike Huckabee, during his re-election campaign for governor of Arkansas. Her father was re-elected as Governor of Arkansas for a second four-year term.
At the Department of Education, she worked as a regional liaison on legislative issues. Huckabee Sanders worked as a field coordinator for President George W. Bush’s re-election campaign in Ohio in 2004.
She served as the national political director for her father’s 2008 presidential campaign. She advised her father on “everything from debate strategy to tie choosing,” according to ‘US Today,’ an American daily middle-market newspaper.

She spent the 2008 campaign “working up to 90 hours a week, running her father’s calendar and event briefings not only in Iowa, but also in South Carolina and New Hampshire,” according to a ‘Time’ magazine feature. She also serves as her father’s proxy in Iowa and oversees outreach.”

After losing the Texas Republican primary, Mike Huckabee withdrew from the presidential race on March 4, 2008.
After that, Huckabee Sanders became the director of the ‘Huck PAC,’ a political action committee whose goal is to promote conservative values and assist in the election of conservative candidates at all levels of government. In 2010, she was named one of ‘Time’ magazine’s ’40 under 40.’

When US House of Representatives member John Boozman decided to run for US Senate in Arkansas in 2010, Huckabee Sanders became his campaign manager.
She attempted to build a solid basis for the latter by presenting Blanche Lincoln, the incumbent two-term Democrat, as a “solid vote for President Obama” and Boozman as someone who “stands up to the Obama Administration’s irresponsible agenda.”

Boozman was a member of the House of Representatives when the first Republican Senate primary discussion took place. He was replaced by Huckabee Sanders, who said he was “in D.C. fighting against (the Senate health-care bill).”

Boozman defeated Lincoln by a 21-point margin in the Republican primary in May 2010. Boozman was elected to the seat for the first time since Reconstruction.

She became a full-time consultant at ‘Tsamoutales Strategies’ in 2011, in addition to her position as a political adviser, and was later named Vice President of the firm in January 2014. In June 2015, she departed the band.
She was named as a senior advisor to Republican presidential candidate Tim Pawlenty in 2012. She focused on Pawlenty’s Iowa campaign after joining his campaign. Pawlenty served as Minnesota’s 39th Governor from January 3, 2011 to January 3, 2011.

She was also involved in Republican Senator Tom Cotton’s 2014 campaign in Arkansas. Cotton was sworn in as a US Senator from Arkansas on January 3, 2015, and will serve with Boozman.
She co-founded Second Street Strategies, a consultancy firm in Little Rock, Arkansas, in February 2016.
She worked as the campaign manager for her father’s 2016 presidential campaign, but joined Donald Trump’s campaign after his father’s campaign ended on February 1, 2016.

She joined the Trump campaign as a senior advisor, and her responsibilities were expanded in September 2016 when she was also given responsibility for the campaign’s coalition liaison.
Meanwhile, she was hired as a senior adviser to John Brunner, a Republican contender for governor of Missouri in 2016.

She joined Donald Trump’s presidential transition team. She was named Deputy White House Press Secretary and Deputy Assistant to the President on January 19, 2017, in the new Trump administration.

She married Bryan Chatfield Sanders, a fellow media strategist, at the ‘Nazareth Lutheran Church’ in Cruz Bay, US Virgin Islands, on May 25, 2010. Her father’s 2008 presidential campaign in Iowa was when she initially met her spouse. Sanders also served as Huckabee’s communications adviser in 2016.
Scarlett, George, and Huck are three of the couple’s three children.

Sarah Sanders has a net worth of $1.5 million. She is an American campaign manager and political strategist. She is best known for serving as the Trump Administration’s Press Secretary, a position she subsequently left. She was paid $179,000.00 per year as Press Secretary.