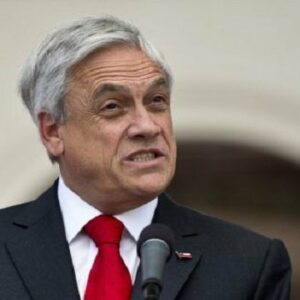 Sebastian Pinera, Chile’s 36th president, is a businessman and politician. Pinera, the son of an ambassador and a descendant of two Chilean presidents from the nineteenth century was destined for a career in government. He has a business and economics background, and he began his career as a professor at three major Chilean universities. Later in life, he was involved in a number of successful commercial ventures before embarking on a political career. He was notably responsible for introducing credit cards to Chileans and owned Chilevision, a nationally televised television channel. He also owned stock in Colo-Colo, a soccer team, as well as LAN Airlines, Chile’s national airline. He served on the Senate Finance Committee during his eight-year service as an East Santiago Senator. Pinera defeated Eduardo Frei in a majority vote in the 2010 election after an unsuccessful presidential attempt in 2005 as a candidate for the National Renewal Party. He ran on a platform of job creation, expanded education, and poverty eradication, and he also vowed to improve Chile’s international ties, becoming the country’s first conservative president in over fifty years.

Sebastian Pinera was the third of six children born to Jose Pinera Carvallo and Magdalena Echenique Rozas on December 1, 1949, in Santiago, Chile.

Jose Manuel, Juan Pablo, and Jose Miguel are his brothers, and Maria Magdalena and Maria Teresa are his sisters.
His family went to New York City when he was one year old, where his father worked for the Chilean Economic Development Agency.

He attended the Colegio del Verbo Divino (“Divine Word College”) after his family returned to Chile in 1955, and graduated in 1967.

The Career of Sebastian

Sebastian Pinera studied Business and Administration as an undergraduate at the Pontifical Catholic University of Chile.
In 1971, he received his Master’s and Doctorate in Economics from Harvard University in the United States.

Pinera served as an associate professor at Harvard and studied under Simon Kuznets, the winner of the Nobel Memorial Prize in Economic Sciences in 1971.

In 1976, he returned to his undergraduate alma mater to teach economics. He was also a professor of economics at the University of Chile, Adolfo Ibanez University, and Valparaiso Business School at the same time.

He worked as a consultant for the Inter-American Development Bank and the World Bank from 1974 to 1978.
In 1976, he worked on a study for the United Nations Economic Commission for Latin America and the Caribbean that identified areas of significant financial suffering in Latin America and suggested solutions.

Pinera founded Bancard, a credit card firm, in 1979, introducing Chileans to a new way of paying for products and services.

He was also the official representative of Apple computers in Chile at the time, and he helped to form Las Americas Real Estate Company, Aconcagua Construction Company, and the Los Andes Publishing House.
From 1990 until 1998, he served as a senator for the Eastern Metropolitan Region’s 8th Voting District.

Sebastian Pinera was chosen as the official presidential candidate for the Coalition for Change in 2009. This party brought together a number of political parties, including the well-known National Renewal and Independent Democratic Union.

Sebastian Pinera was elected president of Chile in 2010 after defeating Eduardo Frei of the Concert of Parties for Democracy.

He voluntarily sold any commercial assets that could have constituted a conflict of interest in his function as president, despite the fact that it was not required by law.

Pinera’s administration made tremendous progress in improving the quality of life for Chileans from 2010 to 2014. Under his leadership, Chile was able to produce one million new employment, boost domestic output, build new hospitals and schools, and lower crime rates.

Pinera founded the Fundacion Mujer Emprende in 1989 with his wife, Cecilia Morel, with the goal of giving vocational training and education to disadvantaged women.

Piera founded the Foundation Fundación Futuro in 1993. Its goal is to aid Chile’s progress toward freedom, justice, and democracy. Following his presidential election victory, the foundation was renamed Fundación Cultura y Sociedad.

Sebastian Pinera received the Raul Iver Oxley prize for graduating first in his class at the Pontifical Catholic University of Chile in 1971.

In 2010, he was awarded a Link Americas Foundation Life Prize for using the media to film the rescue of Chilean miners.
In 2012, he received the Latin Trade Leader of the Year Award at the 18th BRAVO Business Awards.

In 2014, he received the International Statesman Award from the World Affairs Council of Philadelphia for assisting Chile’s transition to a developed country.

During the 1992 Chilean Presidential nominations, he was involved in a political incident known as Pineragate, in which he attempted to have his challenger ambushed by a journalist.

He is also the sole owner of Chilevision, a television network in Chile. From 2010 to 2014, Sebastian was the President of Chile. In 2018, he was re-elected to the presidency.

Blanco & Negro is a soccer team that he owns a stake in.
A history buff with a penchant for reading.

An earthquake of a magnitude of 8.8 and subsequent aftershocks delayed his inauguration event.
National medals were presented to 33 rescued miners.