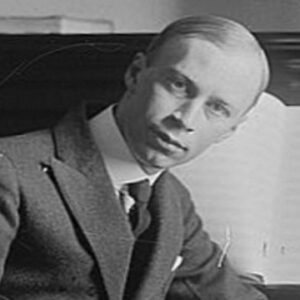 Sergei Sergeyevich Prokofiev was a Russian composer, pianist, and conductor who was born in what is now eastern Ukraine in the late 1800s. He began composing music at the age of five, and at the age of thirteen, he enrolled in the St. Petersburg Conservatory, where he made his first public debut four years later. Soon after, he became well-known throughout Russia, but after the February Revolution, he recognized he had little opportunity in Russia, so he traveled to the United States and then to France on an official passport. He then returned to his hometown and, by the age of fifty-four, had established himself as the Soviet Union’s best composer. Unfortunately, he ran afoul of the authorities soon after, and eight of his greatest works were prohibited from public performance. His final years were marred by illness and financial difficulties, but a few years after his death, he was recognized as one of the best Russian composers working in a wide range of genres, including symphonies, concerti, film music, operas, ballets, and program pieces.

On April 23, 1891, Sergei Sergeyevich Prokofiev was born in Sontsovka, then a distant rural estate under the Russian Empire. It is now known as Krasne and is part of the Donetsk Oblast in eastern Ukraine.

In the time of his birth, his father, an agronomist named Sergei Alexeyevich Prokofiev, was a soil engineer at Sontsovka. Maria/Grigoryevna (née Zhitkova) Prokofieva, his mother, was a talented pianist. She was trained in drama and painting by her master’s family from an early age, as the daughter of a former serf.

Sergeyevich was the sole surviving child of his parents, who had two older sisters who perished in infancy. His mother gave him his first piano instruction when he was three years old, after noticing his love in music.

Sergeyevich wrote his first piece when he was five years old. It was titled ‘Indian Gallop’ and was written for piano. His mother composed the piece in the Lydian mode of F Lydian. He went on to write a couple more works after that.
His parents took him to Moscow in 1899, where he heard an opera for the first time. He began writing one because he was intrigued. A three-act, six-scene libretto was completed quickly. He later transcribed the music with the help of his mother.

Sergei Sergeyevich Prokofiev was introduced to Sergei Taneyev, Director of the Moscow Conservatory, in 1902. Taneyev persuaded composer and pianist Reinhold Glière to give him private lessons over the summers of 1902 and 1903 after being impressed by his musical talent.

Prokofiev initially tried his hand at composing a symphony during this time. He gradually began to explore with harmonies, which led to the composition of a number of short piano compositions. They were dubbed “ditties” by him, and they would subsequently become the core of his musical style.

At the Conservatory of St. Petersburg

Despite the fact that Sergei Prokofiev was clearly a musical talent, his parents were cautious to push him into a musical profession at such a young age. They, on the other hand, were more interested in transporting him to Moscow, where he might attend a good school. They eventually settled on St. Petersburg.

Mother and son visited Petersburg in 1904, when they met composer Alexander Glazunov, who was also a professor at the Saint Petersburg Conservatory at the time. He pushed his mother to let him enroll in the Conservatory, impressed by the boy’s talent.

From 1904 through 1914, Prokofiev studied at the Petersburg Conservatory. He was much younger than his classmates, and he frequently irritated them by maintaining a list of their errors, but he astonished his teachers with his inventive abilities.

Prokofiev made his first public debut at the St Petersburg Evenings of Contemporary Music in 1908, while still a student at the Conservatory. He graduated from his composition class the next year, but remained at the Conservatory until 1914, honing his piano conducting techniques.

When his father died in 1910, he was left to support himself. He had established a name for himself outside of the Conservatory by that time and was thus able to support himself. His mother aided him financially as well.
In 1911, his condition improved when he was introduced to Boris P. Jurgenson, a music publisher who offered him a contract. In the same year, he traveled to Moscow and performed in symphony concerts, where he created an impression.

On July 25, 1912, Prokofiev’s first significant composition, ‘Piano Concerto No. 1 in D-flat major,’ was played in Moscow. It was favorably received, and he repeated the performance on August 7, 1912. He traveled to Paris and London the next year. This was his first travel outside of the United States.

When he returned home, he chose to enter the ‘Battle of the Pianos’ at the St. Petersburg Conservatory, performing his own composition. Because the piece had to be published, he found a publisher who agreed to print twenty copies of ‘Piano Concerto No. 1 in D-flat Major.’

The competition was conducted on May 8, 1914, and Alexander Glazunov presided over the jury. The concert was so successful that Prokofiev was reluctantly granted the Anton Rubinstein Prize. This marked the end of his relationship with the St. Petersburg Conservatory.

During World War I and the Russian Revolution

Sergei Prokofiev traveled to England in 1914, shortly after winning the Anton Rubinstein Prize. Sergei Diaghilev commissioned him to write his first ballet, ‘Ala and Lolli,’ while he was there. He returned to Russia after World War I broke out, but he continued to work on it.

As the only son of a widow, he was exempt from serving in the war and spent his time honing his organ skills while also creating a number of compositions. Meanwhile, he finished ‘Ala and Lolli’ in 1915, but Diaghilev rejected it because it lacked Russian spirit when he submitted it.

Diaghilev then assisted Prokofiev in selecting a theme from a collection of folktales by Alexander Afanasyev. ‘Chout (The Fool)’ was the consequence. However, it had to go through multiple revisions before Diaghilev approved it. In the meanwhile, he wrote ‘The Gambler,’ a four-act opera, between November 1915 and April 1916.

He completed the orchestration of ‘The Gambler’ in January 1917, but it was unable to be premiered due to the outbreak of the February Revolution. As a result, he focused on finishing ‘Symphony No. 1 in D major,’ which he had begun the previous year. It premiered in Petrograd on April 21, 1918.

Despite the fact that he continued to work on the ‘Violin Concerto No. 1 in D major, Op. 19’, Prokofiev felt that music had no future in Russia at the time. As a result, he chose to travel to the United States.

Living in a Foreign Country

Sergei Prokofiev traveled to the United States with formal approval in May 1918, arriving in San Francisco on August 11, 1918. Initially, he was received with great success, and Cleofonte Campanini of the Chicago Opera Association offered him a contract for the staging of his new opera, “The Love for Three Oranges.”

Despite the fact that he finished his work on time, the premiere was postponed owing to Campanini’s death in 1919. He had neglected to establish his solo career due to his overwhelming focus on the opera, resulting in financial difficulties. As a result, he departed the United States for Paris in April 1920.

He reconnected with Sergei Diaghilev in Paris, and his ‘Chout’ was ultimately authorized by the elder musician. It received a lot of praise when it premiered in Paris on May 17, 1921. His ‘The Love for Three Oranges’ premiered in Chicago on December 30th, under his direction.

Prokofiev stayed in Paris and composed several operas and symphonies. Gradually, he gained a following in his nation, and in 1927, he embarked on a two-month tour of the Soviet Union.

Prokofiev began work on ‘The Prodigal Son’ in 1928. It would be his final performance for Diaghilev. It premiered in Paris on May 21, 1929, to great acclaim from both audiences and reviewers.

He was in an automobile accident in October 1929, and his left hand was wounded. He proceeded on his second tour to Moscow shortly after that. Despite his inability to perform, he enjoyed sitting in the audience and watching his team play.

Returning to Your Home

Sergei Prokofiev began developing bridges with the Soviet authorities in the early 1930s. He was Russia’s musical envoy to the west from 1932 until 1939, alternating between Paris and Moscow. During this time, his works were progressively debuted with the support of the Soviet government.

He finally established permanently in Moscow in 1936. This was also the year he wrote his most renowned piece, a symphonic fairy tale for children called ‘Peter and the Wolf.’

Despite having to adapt to a new situation, he continued to create masterpieces. ‘Three Children’s Songs,’ ‘Cantata for the 20th Anniversary of the October Revolution,’ ‘Semyon Kotko,’ the two ‘War Sonatas,’ and ‘Romeo Juliet’ were among the works performed.

In June 1941, as Germany attacked Russia, Prokofiev and other artists were evacuated to the Caucasus. With all restraints removed, Prokofiev was finally able to create his own style of music.

‘War and Peace,’ based on Leo Tolstoy’s novel, was a prominent work during this time, as were ‘The Violin Sonata No. 1’, ‘The Year 1941,’ ‘Ballade for the Boy Who Remains Unknown,’ Cinderella, and the Fifth Symphony.’ He quickly rose to the pinnacle of his profession.

By the beginning of 1945, his popularity had soared to the point that he was regarded as one of the Soviet Union’s top composers. Despite his exhaustion, Prokofiev continued to compose, completing the ‘Sixth Symphony’ and ‘Ninth Piano Sonata’ in 1947.

In February 1948, the Soviet authorities declared Prokofiev’s works to be ‘formalist’ and prohibited the performance of eight of his major works under the Zhdanov ideology. Musicians stopped performing his other pieces as well, fearing retaliation.

He composed ‘The Story of a Real Man’ to placate the authorities. It premiered on December 3, 1948, and was largely watched by cultural department officials, who gave it a bad assessment. Until 1960, public recital of the ballad was prohibited.

Despite being dissatisfied and deeply in debt, he continued to work. His health began to deteriorate rapidly as well. ‘Symphony-Concerto in E minor’ was written and reworked by him in 1950-51. ‘Stone Flower’ (1950), ‘On Guard for Peace’ (1950), and ‘Symphony No. 7 in C-sharp Minor’ are among his last compositions (1952).

Prokofiev is most known for his musical symphony, ‘Peter and the Wolf,’ however his ‘Symphony-Concerto in E minor’ is today considered a cornerstone in the cello and orchestra repertory. It is the most performed work in the classical repertoire, and it has been recorded numerous times since then.

Sergei Prokofiev got six Stalin Prizes, one in 1943, three in 1946, one in 1947, and one in 1951, despite being chastised by the Soviet authorities.
For his ‘Seventh Symphony,’ he received the Lenin Prize posthumously in 1957.

Sergei Prokofiev married the Spanish soprano Carolina Codina, whose stage name was Lina Llubera, in 1923 while residing in the Bavarian Alps. Sviatoslav, who became an architect, and Oleg, who became a painter, sculptor, and poet, were their two sons.

In 1940, Prokofiev began dating Mira Mendelson, a 25-year-old writer and librettist. It resulted in his separation from Lina in 1943, but they were not legally divorced. Until his death in 1953, Mira remained his common-law wife.
Prokofiev had been ailing for the last eight years of his life and died on March 5, 1953, from an ailment that was never fully explained.

His renown grew after his death, and he was once again regarded as the finest composer of contemporary music, both at home and abroad. To commemorate his centennial, the Soviet Union issued a stamp in 1991.

Prokofiev and Stalin both died on the same day. People grieving Stalin’s death thronged the streets, preventing Prokofiev’s body from being brought out for three days for his funeral service.