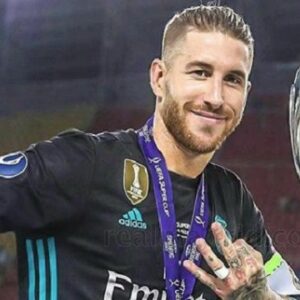 Sergio Ramos is a star Spanish footballer who also serves as the captain of the Spanish national team and Real Madrid. He is one of the most powerful defenders in modern football, yet he does occasionally play as a right back. Sergio was born and reared in Andalusia, Spain, and began his career as a defender for a local team, ‘Sevilla FC,’ at the age of 14. He established his worth and was finally promoted to his club’s main team. In 2005, ‘Real Madrid’ purchased him due to his outstanding achievements. He struggled to make an impact in the first several years after his transfer, and his performances were largely ordinary. From 2009 to 2010, he was at the top of his game. His goal tally was not very high as a defender, but owing to his defending abilities, he was named one of the four captains of ‘Real Madrid’ in the 2009–2010 season. His contract was renewed until 2017 in July 2011, and then again until 2020 in 2015.

Sergio Ramos was born in Camas, Seville, on March 30, 1986, to José Maria and Paqui Ramos. The bullfighting tradition in Seville was well-known. Every other child in the city aspired to be a bullfighter. Sergio was no exception. He wanted to be a bullfighter despite his love for football. He had two siblings, a brother and a sister, and his parents talked him out of pursuing a career in bullfighting because it was a dangerous activity. Sergio was introduced to football by his older brother, Rene, who also happens to be his current manager, and he quickly became addicted.

Sergio’s parents were pleased with his decision and backed him up by hiring a private trainer. Sergio had joined a football club called ‘FC Camas’ when he was a kid, and it had been a terrific learning experience for him. His true abilities were revealed at the club. He received numerous ‘Man of the Match’ accolades as well as media attention.
He was signed by the local team ‘Sevilla FC,’ which catered to young bright players, when he was 14 years old. Sergio became a member of the club’s youth program. Finally, in 2004, he was promoted to the main squad, and he looked forward to a great and successful future.

He played in 41 games for his team ‘Sevilla FC’ in the 2004–2005 season, helping them to sixth place. He had also qualified for the ‘UEFA Cup,’ where he scored his first goal against ‘CD Nacional.’ His success garnered him numerous awards and ensured his place in the major leagues.

Sergio made an impression on the national ‘Under-21’ team in 2004, appearing in six international matches. In a friendly encounter against China in March 2005, he made his international main squad debut, leading his team to victory. He was also the youngest player to secure a spot on Spain’s national squad in 55 years. He has represented Spain in three ‘World Cups,’ in 2006, 2010, and 2014. In 2008, 2012, and 2016, he also competed in three ‘Euro Cups.’ Sergio has 13 goals in 149 appearances for Spain.

Sergio was quickly noticed by ‘Real Madrid,’ who purchased him for a staggering 27 million Euros. The agreement was signed in March 2005. In December of that year, he scored his first goal in a ‘UEFA Championship League’ group stage encounter. Despite the fact that his team lost by one goal, his performance was praised. His first four years with ‘Real Madrid’ were not as successful as he had hoped. He was primarily utilized as a defensive midfielder and a center defender, with the latter being his strongest position. He was quickly promoted to right back, which boosted his goal-scoring opportunities. Sergio had little trouble scoring goals from his position, something that most defenders struggle with. This received a lot of positive feedback. In his first four seasons, he scored 20 goals.

Throughout the games, though, his aggressiveness on the field was a source of concern for the team’s management. He received four red cards in the first season alone, and five more red cards in the following three seasons. ‘Real Madrid’ through a sad period in August 2008, when they had only nine players on the field for an extended period of time.

Sergio had a rough start to the 2008–2009 season, but the club quickly found its stride. He was named to the ‘UEFA Team of the Year’ and the ‘FIFA FIFPro World XI’ team in 2008, in addition to finishing 21st in the ‘European Player of the Year’ nomination.

In the 2009–2010 season, ‘Real Madrid’ had a little problem, which helped Sergio become one of the team’s four leaders. Sergio scored four goals in the 33 games he appeared during the season. In February 2010, he reached the milestone of playing his 200th game of his career.

In a game against ‘FC Barcelona,’ he received one of the most iconic red cards of his career after kicking Lionel Messi from behind. His tenacity caused a lot of problems for ‘Real Madrid,’ but it also helped them win games against better opponents. His contract with ‘Real Madrid’ was renewed until 2017 in 2011. For the next few years, he maintained his momentum and was instrumental in his team’s many key victories. During the 2012–2013 season, he led his club to a series of victories. Under his leadership, his squad defeated ‘Barcelona.’

Sergio scored two successive goals by headers in the Champions League semi-final encounter against ‘Bayern Munich’ in April 2014. For the first time in 12 years, his team reached the finals of the ‘Champions League.’
His ‘Real Madrid’ contract was renewed for another five years in 2015. He led his club to a 10–2 victory in a ‘La Liga’ encounter in December 2015. In 55 years, ‘Real Madrid’ had not won a ‘La Liga’ match by such a large margin. His most successful season was the 2016–2017 season, in which he scored 10 goals.

Sergio Ramos met famous model, TV journalist, and presenter Pilar Rubio in 2012, and the couple married in September of the same year. The pair married in the same year. Sergio and Marco are their two sons. Sergio had a history of having several relationships before to his relationship with Pilar. Elisabeth Reyes, Carolina Martinez, Amaia Salamanca, and Lara Alvarez were some of his previous girlfriends.

Throughout his great football career, Sergio has maintained tight ties with his family. Sergio’s manager has always been his brother, Rene, since Sergio began his career. Sergio has always been a big lover of bullfighting. He has been pals with matador Alejandro Talavante for a long time. Sergio enjoys playing the guitar in his spare time. Sergio describes himself as a “romantic at heart.”

Sergio Ramos  has a net worth of $80 million dollars.