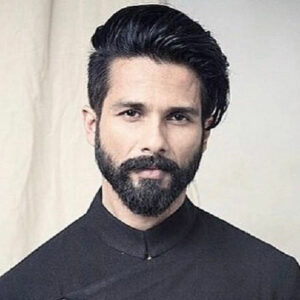 Shahid Kapoor is an Indian film actor who mostly works in the Hindi film industry, popularly known as Bollywood. He has a wide career that includes his outstanding performances in films such as ‘Haider,’ ‘Kaminey,’ ‘Jab We Met,’ and ‘Udta Punjab.’ He has also been in a few music videos and marketing campaigns. Shahid has gone a long way from uncredited appearances in films like ‘Dil To Pagal Hai’ and ‘Taal’ to conquering the film business. In fact, he is currently one of Bollywood’s most in-demand actors. He is noted for his flexibility as an actor and his ability to play a variety of characters with precision. Despite a string of flops, Kapoor remains one of India’s most famous movie stars. For his efforts in Bollywood, he has received three ‘Filmfare Awards.’ Shahid has also presented award shows in addition to acting. He has also served as a judge on ‘Jhalak Dikhhla Jaa Reloaded,’ a dance reality show.

Shahid Kapoor was born Shahid Khattar in New Delhi, India, on February 25, 1981. Pankaj Kapur and Neelima Azeem, both accomplished actors, are his parents.

Ishaan Khattar and Ruhaan Kapoor are his two brothers, and Sarah Kapoor is his sister. Shahid’s parents divorced when he was three years old, and he moved back in with Neelima.

He attended ‘Gyan Bharati School’ till fourth grade, when he was transferred to ‘Rajhans Vidyalaya’ in Mumbai, where he lived with his stepmother Supriya Pathak. At a young age, he had a fascination for dancing.

Shahid enrolled in the Shiamak Davar Institute of Performing Arts to pursue his passion (SDIPA). He rose to prominence at an early age after appearing in the song video ‘Aankhon Mein.’

Shahid got an interest in acting after the premiere of this video. In films such as ‘Taal’ and ‘Dil To Pagal Hai,’ he performed as a dancer. After being recognized in an audition, he went on to star in a few commercials for businesses including ‘Pepsi.’

When Shahid was 11 years old, he had his debut appearance on screen in a commercial for a health drink. Years later, he starred alongside Shahrukh Khan, Rani Mukherjee, and Kajol in a Pepsi commercial.

When he participated in a music video for the band ‘Aryans,’ he became famous for the first time. Shahid was still rejected after that due of his slender physique and boyish appearance.

Shahid made his acting debut in 2003 with the film ‘Ishq Vishk,’ for which he received a ‘Filmfare Award’ for ‘Best Male Debut.’ Shahid began obtaining roles in romantic films after the film’s release. His acting mannerisms have been compared to those of Shahrukh Khan, who is known as the ‘King of Romance.’

From 2003 through 2006, practically all of his films were box office flops. Shahid was seen as a one-hit wonder after the failure of films such as ‘Dil Maange More,’ ‘Vaah! Life Ho Toh Aisi!,’ and ‘Fida.’

In 2006 and 2007, he had two back-to-back hits with ‘Vivah’ and ‘Jab We Met,’ respectively. He received accolades and nominations for both films. Shahid took on more substantial and meatier parts during this time in an attempt to shed his romantic hero image.

He appeared in Vishal Bhardwaj’s film ‘Kaminey’ in 2009. Shahid’s unconventional role in the film startled his reviewers. His performance was his most impressive to yet.

In Pankaj Kapoor’s directorial debut, ‘Mausam,’ he was cast opposite Sonam Kapoor. The movie was a flop at the box office.

After then, Vishal Bharadwaj presented him with one of his most important films. They worked together again in 2011 for the film ‘Haider,’ a fantastic rendition of Shakespeare’s ‘Hamlet.’ Shahid benefited from Vishal’s ability to bring out the best in his actors.

In 2016, he starred in the most divisive film of his career, ‘Udta Punjab.’ The picture was first prohibited due to its violent and nasty nature, which put it in the spotlight for all the wrong reasons. The film was also in the headlines because it depicted drug use in many sections of Punjab in great detail.

After all of the hoopla, the film was released to the public. Despite the fact that Alia Bhatt outshone him in the film, Shahid’s portrayal of a cynical drug addict rock singer was well received.

In 2017, he appeared in the film ‘Rangoon,’ alongside Kangana Ranaut and Saif Ali Khan.

Kapoor made his acting debut in the 2019 film ‘Kabir Singh,’ an adaptation of the Telugu romantic thriller ‘Arjun Reddy.’

Ishq Vishk — Shahid finally got a role in this Ken Ghosh-directed romantic comedy after a string of rejections. Shahid portrayed ‘Rajeev,’ a popular college student who is charmed by the new hottie in school, ‘Alisha.’ This picture, which was released on May 9, 2003, was a hit among college students.

Vivah – Shahid’s career was boosted by this romantic drama directed by Sooraj Barjatya. Thanks to ‘Ishq Vishk,’ his on-screen chemistry with Amrita Rao was already a hit, and this film proved to be a success for both of them. This film was the highest-grossing Hindi film at the time of its release, based on the journey from engagement to marriage. On November 10, 2006, the picture was released in theaters.

We Met – Jab Shahid’s performance in this film, which he shared with Kareena Kapoor, was praised by critics. The plot centres around ‘Aditya Kashyap,’ a miserable and failing businessman who subsequently becomes a vibrant person after meeting a chatty Sikh girl named ‘Geet.’ When it was released in theaters on October 26, 2007, the picture received overwhelmingly good reviews.

Shahid captivated the audience with two opposing roles in this dark comedy, Kaminey. In the film, he played two characters: a lisping ‘Charlie’ and a stammering ‘Guddu.’ He was able to play both personalities with ease, demonstrating his versatility as an actor. His performance in the film received a lot of praise. His superbly toned figure was the film’s highlight. On August 14, 2009, the film ‘Kaminey’ was released in theaters.

‘Hamlet,’ a film based on William Shakespeare’s play, is directed by Haider. It was shot in Kashmir’s stunning valley. The film follows Shahid’s character, ‘Haider,’ who learns that his peace-loving, life-saving doctor father has been arrested by the Indian Army. Following the film’s release on October 2, 2014, Shahid received numerous plaudits for his outstanding performance.

Udta Punjab – This film caused a stir in Shahid’s career due to the Censor Board’s decision to block it. The film was finally authorized to be released on June 17, 2016, after becoming a victim of video piracy. Shahid’s performance as rock icon ‘Tommy Singh’ was well-received, and his riveting performance kept the audience hooked to the screen till the very end.

Kabir Singh – ‘Kabir Singh’ is a remake of ‘Arjun Reddy,’ a Telugu film. It became the second-highest grossing Bollywood film of 2019, grossing more than 379 crore at the box office. Many people attacked it because the primary character, played by Shahid, exhibited macho chauvinism.

Shahid’s first love was Hrishita Bhatt, with whom he appeared in the music video for the Aryans. He began dating Kareena Kapoor after meeting her on the sets of ‘Fida’ after his breakup with Hrishita.

During the filming of ‘Jab We Met,’ Shahid and Kareena split up. Following that, he was linked to a number of actresses, including Priyanka Chopra, Vidya Balan, and Amrita Rao.

Shahid Kapoor married Mira Rajput, who is 13 years his junior, in an arranged marriage on July 7, 2015. Misha Kapoor, the couple’s firstborn child, was born in 2016. Zain, their son, was born in September of this year.

Shahid Kapoor’s Net Worth is about $36 Million.