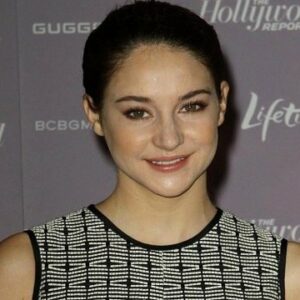 Shailene Woodley is an actress and activist from the United States. She rose to fame after playing ‘Alexandra ‘Alex’ King,’ a drug-addicted adolescent in ‘The Descendants.’ She followed up her acclaimed performance in ‘The Descendants’ with a string of outstanding performances that demonstrated her ability to seamlessly represent tough roles. Early in her career, Shailene was able to earn a prominent position in the film business, which is an accomplishment in and of itself. She began her acting career in commercials and television shows before moving on to big roles in Hollywood blockbusters. She has won numerous honors for her acting abilities, including the ‘MTV Movie Awards,’ ‘People’s Choice Awards,’ and ‘Teen Choice Awards.’ She’s also been nominated for big accolades like the BAFTAs, Golden Globes, and Primetime Emmys. Shailene Woodley is a prominent actress who is also an environmentalist and activist. She and her mother co-founded the non-profit organization ‘All it Takes’ in 2010. For co-founding the ‘All it Takes’ organization, she received the ‘Entertainment Industry Environmental Leadership Award’ at the 20th ‘Anniversary Global Green Environmental Awards’ in 2016.

Shailene Diann Woodley was born in San Bernardino, California, parents Lori Victor and Lonnie Woodley on November 15, 1991. Lori works as a middle school counselor, while Lonnie works as a school principal.
She grew raised in Simi Valley, California, with her younger brother Tanner. She began modeling and advertising when she was four years old, while still attending regular school.
She began taking acting classes from Anthony Meindl when she was five years old. She enrolled in ‘Simi Valley High School’ after finishing elementary school.
Shailene had a rough time in high school because she got involved with the wrong crowd and began drinking. With the help of her parents, she was eventually able to limit her alcohol use.
She developed Scoliosis, a sideways curvature of the spine, at the age of 15, for which she had to wear a plastic brace from her chest to hip. Fortunately, it was discovered early on, and no harm was done.

Streak on the Television

She made her television debut at the age of eight with the show ‘Replacing Dad.’ She starred in minor roles in television shows such as ‘The District’ and ‘Crossing Jordan’ after a few years.
Her performance was praised, and she was cast in the lead part in the television film ‘A Place Called Home’ in 2004.
When she played ‘Kaitlin Cooper’ in ‘The O.C.,’ her prominence as a kid artist skyrocketed. She was then offered the title part in ‘Felicity: An American Girl Adventure’ on television.
She featured in guest parts on many shows from 2004 through 2008. Her performances in ‘Everybody Loves Raymond,’ ‘My Name is Earl,’ ‘CSI: NY,’ and ‘Close to Home’ allowed her to hone her acting skills and get notoriety.
She was cast as ‘Amy Juergens,’ the protagonist of ‘The Secret Life of the American Teenager,’ in the film ‘The Secret Life of the American Teenager,’ in 2008. Her career has benefited from the series. Shailene portrayed the part of a pregnant adolescent in the series. The actor did a fantastic job portraying the character’s trials.

A Rising Star in the Film Industry

Her performance in ‘The Descendants’ marked a turning point in her career. In 2011, she portrayed the pampered daughter of George Clooney’s character ‘Matt King.’ On the set of the film, she gained expertise and was praised for her interpretation of the character.
She was featured on the front covers of numerous magazines after her appearance in ‘The Descendants.’ In 2012, she was named to the ‘Most Beautiful at Every Age’ list by ‘People,’ and she was dubbed ‘The Future of Hollywood’ by ‘Nylon.’
In the film ‘The Spectacular Now,’ she played ‘Aimee Finecky,’ a geek in a romance with a high school senior played by Miles Teller.’ Her performance in the picture, according to the ‘Los Angeles Times’ and ‘The Guardian,’ was strong and mature.
In the meanwhile, she signed the film ‘White Bird in a Blizzard’ in 2012. Her acting in the film was praised, despite the film’s divided reviews. Her performance in the film was praised by critics as natural. She also appeared in ‘The Amazing Spiderman 2’ in 2012 as ‘Mary Jane Watson.’ Her character, however, was cut from the film because the production team felt that include her would provide a distraction from the primary plot.
‘Orlando Weekly’ said in 2014 that her portrayal of ‘Beatrice Prior’ in ‘The Divergent’ saved the picture from being a box office flop. Her performance was also said to have propelled the picture to the top of the box office in its first week, making it a blockbuster.

Her role of ‘Hazel Grace,’ a cancer patient, in the film ‘The Fault in Our Stars,’ an adaption of John Green’s novel, is one of her most memorable performances to date. Shailene’s portrayal of the character, according to the author, was “breathtaking.”
The ‘Chicago Sun-Times’ that Shailene be nominated for a ‘Oscar’ for her performance in ‘The Fault in Our Stars.’ According to the journal, her performance was the most memorable in the film.
In ‘The Divergent Series: Insurgent,’ she resumed her role as ‘Beatrice Prior,’ the sequel to ‘The Divergent.’ She also appeared in the third installment of ‘The Divergent Series,’ ‘The Divergent Series: Allegiant.’
In 2016, she starred as ‘Lindsay Mills’ opposite Joseph Gordon-Levitt in the biographical thriller film ‘Snowden,’ which was released on September 22, 2016 in the United States.
Shailene began focused on television roles after establishing herself in the film industry. In 2017, she was cast opposite Nicole Kidman and Reese Witherspoon in the HBO series ‘Big Little Lies,’ in the important role of ‘Jane Chapman.’
With her 2018 romantic drama film ‘Adrift,’ directed by Baltasar Kormákur, she became a full-time producer. The film received mixed reviews from critics, however many people praised her portrayal.
In 2019, she starred in the romantic drama film ‘Endings, Beginnings,’ directed by Drake Doremus. She was cast as ‘Jennifer Stirling’ in the romantic drama film ‘The Last Letter from Your Lover’ the same year. She was also cast as ‘Teri Duncan’ in the drama film ‘Prisoner 760’ in 2019. Major Works ‘Rolling Stone’ called her “a sublime actress” for her portrayal in ‘The Fault in Our Stars.’ She was also “incapable of a mistake move on camera,” according to the magazine. At the box office, the film grossed more than 307 million dollars.
Her appearance in ‘The Divergent Series’ cemented her reputation as a bankable Hollywood star. The film franchise grossed hundreds of millions of dollars around the world, with the third movie bringing in 179.2 million dollars.

For her work in the 2004 television film ‘A Place Called Home,’ she won her first acting nomination at the ‘Young Artist Award’ for ‘Best Leading Young Actress in a TV Movie.’
She earned the ‘Special Jury Award for Acting’ category at the 2013 ‘Sundance Film Festival’ for her part in ‘The Spectacular Now.’ She was also nominated for a ‘Independent Spirit Award’ in 2014 for her role in the film.
She got the ‘Breakout Performance – Actress’ category at ‘The Hollywood Film Awards’ in 2014 for ‘The Fault in Our Stars.’
For her part in ‘Big Little Lies,’ she was nominated for both the ‘Golden Globes’ and the ‘Primetime Emmy Awards.’

She revealed her relationship with Ben Volavola, an Australian-Fijian rugby union player, in 2018.
She revealed in an interview with Jimmy Kimmel that she has handed her home to her grandma because she isn’t around to use it. When she visits Los Angeles, she stays with her friends.
She is an environmental activist who was arrested for trespassing in Saint Anthony, North Dakota, after protesting the Dakota Access Pipeline’s installation. She, on the other hand, held firm and continued to protest, seeing it as a threat to the environment. She’s also a member of ‘Our Revolution,’ a political movement dedicated to raising voter awareness of the importance of electing progressive candidates to office.

To keep her teeth fresh and white, Woodley brushes her teeth with clay and cleanses her mouth with sesame oil.