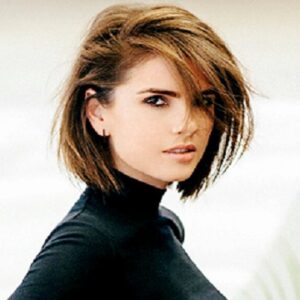 Shelley Catherine Hennig in the part of Stephanie Johnson surely deserves her due share of credit for the show’s success, as many fans of the mega hit soap opera ‘Days of Our Lives’ would attest! The attractive and captivating actress not only brought the character to life on film, but she also received numerous prizes and praises for it, including two Emmy nominations. The gifted actress is most recognized for her role as Malia Tate in the teen drama ‘Teen Wolf.’ She was beautiful and captivating from a young age, competing in several beauty pageants as a teenager and winning Miss Teen USA in 2004, making her the first winner from Louisiana. The reward includes a one-year modeling contract with Trump Modeling Management as well as a tuition to The New York Conservatory for Dramatic Arts, thereby laying the groundwork for her future career. She was compelled to make multiple guest appearances on television shows as a beauty queen, which not only exposed her to the acting industry but also gave her the confidence to pursue acting and modeling as a full-time career—an option the bright student had not really considered previously.

Shelley Hennig had always been interested in the fine arts, but she hadn’t considered a future in the fashion industry. She was a stellar student who adored English lessons and even dabbled in poetry. She was the school’s fastest typist and was a stickler for spelling and grammar. When she participated and won the Miss Louisiana Teen USA 2004 pageant, her life as “just another” girl-next-door altered radically. Shelley went on to win the national Miss Teen USA title, and it was this victory that propelled her from an average high school student to a beautiful diva.

She was introduced to the world of television and movies as a beauty queen, and she began her career in cameos and guest appearances. Despite relinquishing her crown in 2005, she stayed active in the media industry, appearing on reality shows. Her acting career really started to take off in 2007. She began what would become a hugely successful television career when she was cast in the part of Stephanie Johnson in the serial ‘Days of Our Lives.’ For her role in this series, she was nominated twice for a Daytime Emmy Award in the category of Outstanding Younger Actress. She later played Diane Meade in the sitcom “The Secret Circle” and Malia Tate in “Teen Wolf.”

Her portrayal of Malia was well-received by both audiences and reviewers, earning her the Teen Choice Award for Favorite Summer TV Star: Female in 2016. Shelley has also starred in a music video by the Band Perry called “Gentle On My Mind,” in addition to her acting career. She is a talented dancer and enjoys writing in addition to acting. Two of her poems have even been featured in the’ Young Authors Book of Poetry.’

Shelley Hennig was born in Metairie, Louisiana, to Cathy Distefano Gosset and Glenn H. Hennig, Sr. on January 2, 1987. Her father is of German, Swiss-German, Scottish, and English descent, while her mother is Italian. She was the youngest of three siblings and was raised by two older brothers who were entirely devoted to her. On August 9, 2001, one of her older brothers, Brad Joseph, was killed in a drunk-driving accident near Destrehan, Louisiana.

He was just 18 years old when he died, and his unexpected death broke the hearts of his entire family. This explains why the young lady decided to become an anti-underage drinking champion. She has collaborated with the Council on Alcohol and Drug Misuse (C.A.D.A. ), a local Louisiana non-profit organization, to raise awareness about the effects and repercussions of drug and alcohol abuse. In addition, Seeds of Peace, D.A.R.E., Sparrow Clubs, and SHiNE are among the non-profit organizations with which the actress and model has been affiliated.

Shelley Hennig has a net worth of $1 million. She is an American actress and beauty pageant winner. In January 1987, Shelley Hennig was born in Metairie, Louisiana. She was crowned Miss Louisiana Teen USA in 2004 before going on to become Miss Teen USA 2004.