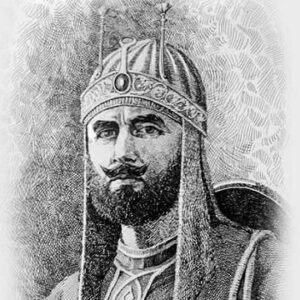 Sher Shah Suri was the founder of North India’s Sur Empire. He established a new civic and military administration and enacted various reforms in the financial and postal sectors after seizing control of the Mughal Empire in 1540. He reorganized the empire and resurrected Pataliputra as Patna, a historical city that had been in decay since the seventh century CE. He was a renowned fighter and administrator whose works created the groundwork for the subsequent Mughal kings. He grew up to be a bold young guy with an ambitious and adventurous spirit as one of numerous sons of a horse breeder. He rebelled against his father and left home to work for Jamal Khan, Jaunpur’s governor. He subsequently went to work for Bahar Khan, Bihar’s ruler, and highly impressed him with his heroism and daring. He quickly advanced through the ranks of the military and was appointed governor of Bihar following the assassination of Bahar Khan. Increasing in size with each passing day, he conquered Bengal and destroyed the Mughal Emperor Humayun at the Battle of Chausa, assuming the royal title of Farid al-Din Sher Shah. Among India’s greatest Muslim kings, he died in 1545 at the siege of Kalinjar fort.

Sher Shah Suri was born in 1486 in Sasaram, Rohtas district, Bihar, India, as Farid Khan. Ibrahim Khan Suri’s grandfather was a landlord (Jagirdar) in the Narnaul district, while his father, Mian Hassan Khan Suri, was a horse breeder and a major person in Bahlul Khan Lodi’s government. Farid had a large brood.

Farid Khan grew into a bold young man and was given a hamlet in Fargana, Delhi (which includes the modern-day districts of Bhojpur, Buxar, and Bhabhua in Bihar) by Omar Khan Sarwani, Bahlul Khan Lodi’s counselor and courtier.
Farid frequently clashed with his father and fled home to chase his fortunes on his own.

He was then recruited as a soldier in the service of Jamal Khan, the governor of Uttar Pradesh’s Jaunpur district. Meanwhile, his father died, and he inherited his father’s jagir.
In 1522, Farid Khan joined the service of Bahar Khan, the ruler of Bihar. He rapidly won Khan’s respect and admiration for his daring and valor and was named his deputy. He also became Bahar Khan’s minor son’s instructor and mentor.

Farid once killed a full-grown tiger with his bare hands while on a hunting excursion, earning him the title of Sher Khan from Bahar Khan in acknowledgment of his valor.

Sher Khan, an aggressive personality, fell out with Bahar Khan and joined Babur’s side in 1527-28. He returned to Bihar upon Bahar Khan’s demise and was appointed governor. He reformed the government and developed a well-disciplined army throughout his tenure in this capacity. He became the accepted king of Bihar within four years.

In 1538, he expanded his ambitions and attacked Bengal, handily defeating Ghiyashuddin Shah. He was unable to take the country, however, due to Mughal Emperor Humayun’s concurrent invasion of Bengal.

In June 1539, Sher Khan squared off against Humayun at the Battle of Chausa. Sher Khan conquered the Mughal Emperor and took the title of Farid al-Din Sher Shah as his imperial title. The clashes between Sher Shah and Humayun continued as Humayun attempted to reclaim lost territory, and the men met again in May 1540 at Kannauj.

Sher Shah defeated Humayun once more, forcing him to flee India. By 1540, Sher Shah had defeated all of his adversaries in Bengal, Bihar, and Punjab. He conquered the Mughal Empire and established the Sur Empire in North India, with Delhi as its capital. In 1542, he conquered Malwa; in 1543, Raisin, Multan, and Sindh; and in 1544, Marwar and Mewar.

Sher Shah Suri was not only a valiant warrior but an astute administrator as well. He instituted a number of changes and restructured the civil and administrative systems. He is also credited with introducing the tri-metal coinage system that became synonymous with Mughal currency.

During his reign, he performed important architectural works, including the construction of Rohtas Fort, Sher Shah Suri Masjid, and the Qila-i-Kuhna mosque. He also founded a new city in Pakistan, Bhera, in 1545.

One of Sher Shah Suri’s most notable confrontations was the Battle of Chausa in 1539 when his forces beat the Mughal emperor Humayun’s army. Sher Shah’s victory in the battle effectively ended Humayun’s rule and created the groundwork for Suri to build the Sur Empire in North India.

Sher Shah Suri constructed the Maurya Empire’s Grand Trunk Road, which extended from the Ganges mouth to the Empire’s northwestern frontier. The road’s objective was to connect the various provinces of his enormous empire for administrative and military purposes.
He also constructed various landmarks, including Rohtas Fort, Patna’s Sher Shah Suri Masjid, and Delhi’s Qila-i-Kuhna mosque.

Sher Shah Sur wed Lad Malika, the widow of Taj Khan, Chunar’s governor. This marriage significantly aided him in solidifying his position as a powerful king, as it resulted in his acquisition of the Fort of Chunar.

Until the end, he remained a valiant and ambitious warrior. On 13 May 1545, Sher Shah Suri was murdered in a strange event during the siege of Kalinjar fort. His son, Jalal Khan, succeeded him as Islam Shah Suri. His successors, on the other hand, proved to be ineffective rulers, and the Mughals were able to re-establish their power in India within a few years.

Sher Shah Suri’s estimated net worth is $ USD 8 million, with the monarchy providing the primary source of income. We lack sufficient evidence regarding Sher Shah Suri’s automobiles and lifestyle.