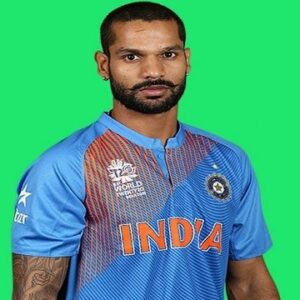 Shikhar Dhawan is a left-handed opening batter for India in international cricket. In domestic cricket, he represents Delhi, and in the IPL, he represents Sunrisers Hyderabad (Indian Premier League). In the IPL, he formerly played for the Delhi Daredevils and Mumbai Indians. He rose to prominence following a single-tournament record of 505 runs in the 2004 Under-19 World Cup, but he had to wait for his national debut due to the Indian team’s overabundance of successful openers such as Virender Sehwag and Gautam Gambhir. Before he received his national cap at the age of 27, he observed the blossoming careers of his opening duo from the Challenger Trophy 2005, MS Dhoni and younger Delhi batsman Virat Kohli. However, he made full use of his domestic cricket experience to establish himself as a run-machine and has firmly established himself as India’s opening batsman. He was just chosen the Indian T20I team’s vice-captain for the Tri-Series in Sri Lanka.

Shikhar Dhawan was born on December 5, 1985, in Delhi, India, to Sunaina and Mahendra Pal Dhawan, Punjabi Khatris. He has a younger sister named Shreshta, who married in November of 2017.

His uncle persuaded him to join the famed Sonnet Club at the age of 12 to train cricket under famous coach Tarak Sinha. He instantly impressed his coach by scoring a century for the U-15 squad in a school event, proving that he was not scared to rub shoulders with the big boys.

In Paschim Vihar, Delhi, he attended St. Marks Senior Secondary Public School. After completing 12th grade, he had to drop out of school to focus on his cricket career.

Shikhar Dhawan made his debut for Delhi Under-16s in the 1999-2000 Vijay Merchant Trophy, guiding his team to the finals as the leading run-scorer the next season. He was then chosen to play for the North Zone Under-16s team, and at the age of 15, he was selected for the Delhi Under-19 team.

He continued to perform well in every competition, but his best performance came in the 2004 Under-19 World Cup in Bangladesh, where he scored 505 runs at an average of 84.16 with three centuries and a fifty. Despite his outstanding performance, his national debut was postponed because the Indian team already had a successful opening duo in the form of Virender Sehwag and Gautam Gambhir.

In November 2004, he made his first-class debut for Delhi against Andhra Pradesh in the Ranji Trophy, followed by a List A debut against Jammu & Kashmir in the Ranji One-day Trophy in January 2005. Despite some ups and downs, he shown consistency by topping the top scorers list in a number of tournaments and helping Delhi win the Ranji Trophy in 2007–08.

After failing to capitalize on his ODI debut opportunity in late 2010, he struggled to succeed in the Duleep Trophy, Vijay Hazare Trophy, and Deodhar Trophy. During the 2012-13 season, however, he was in outstanding form in the Challenger Trophy, Duleep Trophy, and Ranji Trophy, scoring a century as the Delhi captain in a List-A match against a visiting England team.

Shikhar Dhawan was called up to the national senior team for the first time in October 2010 for a three-match One-Day International series against Australia, but he was dismissed for a second-ball duck in his first match. He was then selected to play in limited-over matches during India’s tour of the West Indies in June 2011, during which he made his T20I debut, although he failed to impress once again, save from a half-century.

Following his outstanding domestic success, he was called up to the Indian Test squad in February 2013 for a four-match series against Australia, and received his Test cap on March 14, 2013, from Sachin Tendulkar. On his debut, he scored 187 runs with Murali Vijay in a 283-run opening partnership, breaking Gundappa Viswanath’s record for the fastest century on debut, although he also sustained an injury.

Following his recuperation, he played well in the IPL and was named for the 2013 ICC Champions Trophy ODI squad, where he formed a successful opening partnership with Rohit Sharma. In the first two matches of the competition, he achieved his first and second ODI hundreds, and he was given the Golden Bat for his 363 runs.
Following a mediocre showing in the tri-series against the West Indies and Sri Lanka, he scored huge against Zimbabwe, Australia, and the West Indies. He formed two big partnerships against Australia, both of which were successful in chasing down 350-plus totals.

He struggled on India’s December 2013 and January 2014 tours of South Africa and New Zealand, but recovered significantly in the 2014 Asia Cup, which India eliminated early. However, he struggled in the Test series against England, and despite a strong showing in the ODI series against Sri Lanka, he missed out on the 2014 Border-Gavaskar Test series in Australia.

He got off to a terrific start in the 2015 World Cup, scoring two hundreds, including a career-high 137, which helped him reclaim his place in the Test team. He joined the likes of Sunil Gavaskar and Rahul Dravid by scoring hundreds in back-to-back away matches against Bangladesh and Sri Lanka.

He made a triumphant comeback for the 2017 Champions Trophy, riding on his domestic performance, and won the Golden Bat for scoring the most runs for the second time. In the September 2017 Test series against Sri Lanka, he scored two hundreds.

Career in the Indian Premier League

Shikhar Dhawan’s early performances in the competition were poor, and he was forced to switch teams from Delhi Daredevils to Mumbai Indians to Sunrisers Hyderabad in 2013. He has taken the squad to the playoffs twice since then, in 2016 and 2017, capturing the title in 2016.

The fastest Test century by a debutant is Shikhar Dhawan’s 187 against Australia in 2013. He was named the ‘CEAT International Player of the Year’ that season and was chosen to the ‘ICC World ODI XI.’
He is the only player in ICC Champions Trophy history to win two Golden Bats in a row.
He is the fifth-fastest batter in ODI history to achieve 4000 runs.

Indian spinner Harbhajan Singh connected Shikhar Dhawan to his future wife, Melbourne-based professional kickboxer Ayesha Mukherjee, via Facebook. His parents were initially opposed to the union because of his 10-year age difference with the half-Bengali, half-British woman, her prior marriage to an Australian businessman, and her two daughters from her first marriage.

After his parents approved of their relationship, the two became engaged in 2009, but he wanted to establish himself first. They married on October 30, 2012, and in early 2014, they welcomed a boy called Zoravar.

When Shikhar Dhawan originally joined Sonnet Club, he was a wicket-keeper, but coach Tarak Sinha recognized his batting ability and developed him as an opener.

Shikhar Dhawan Net Worth is around $13 Million.