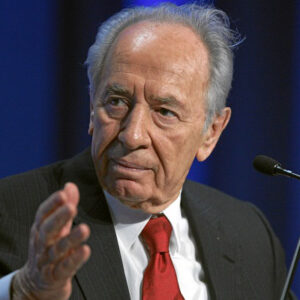 Shimon Peres served as Israel’s Prime Minister and President. With a political career spanning almost six decades, he was one of Israel’s most experienced politicians. During Israel’s ‘War of Independence,’ he held a number of military and diplomatic positions. He became Deputy Director-General of Defense and then Director General of Defense shortly after the war ended. After being elected to the Knesset for the first time in November 1959, he remained a part of twelve ministries. With the exception of three months in 2006, he remained in the Knesset continuously until 2007. He served in the Knesset for five different parties, including ‘Rafi,’ ‘Israeli Labor Party,’ Mapai, ‘Kadima,’ and the ‘Alignment.’ He also served as Interim Prime Minister on several occasions. In June 2007, he was elected President of Israel for a seven-year tenure. During his time as Israel’s foreign minister, he assisted in the negotiations of a peace agreement with Ysir Araft, the then-chairman of the ‘Palestine Liberation Organization.’ Both of them, along with Yitzhak Rabin, Israel’s then-Prime Minister, got the ‘Nobel Peace Prize’ for their efforts to promote peace in 1994.

He was born Szymon Perski on August 2, 1923, in Wiszniew, Poland, to Yitzhak Perski and Sara Perski. His father worked as a wealthy lumber merchant, and his mother as a librarian.
He was nurtured in Rabbi Zvi Meltzer’s home, where he was educated and taught Talmud. In his early years, his grandfather had a big influence on him.

In 1932, his father relocated to Tel Aviv, and the family followed in 1934. He attended ‘Balfour Elementary School’ and ‘Balfour High School’ in Tel Aviv, as well as ‘Geula Gymnasium’. He then went to Ben Shemen Agricultural School.

He lived in Kibbutz Geva for many years. Kibbutz Alumot was co-founded by him.
In 1941, he became the Secretary of the ‘Hanoar Haoved Vehalomed,’ a ‘Labor Zionist’ youth organisation.
After returning to Alumot, he became the Kibbutz’s secretary and worked as a shepherd and dairy farmer.
All of his relatives living in Wiszniew perished in the ‘Holocaust’ massacre carried out by the Nazis in 1941.
When he was twenty, he was chosen to the national secretariat of the ‘Working and Learning Youth,’ of which just two were supporters of the ‘Mapai’ party. After three years as the movement’s leader, he went on to gain a majority.
David Ben-Gurion, the leader of the ‘Mapai’ secretariat, inducted him.

In 1944, he led an illegal expedition to Negev, which included a group of youngsters, an archaeologist, a zoologist, and a Palmach scout. The mission was conceived by Yitzhak Sadeh, the Palmach leader, but it was funded by David Ben-Gurion. Shimon Peres had to pay an extra fine after a British officer conducting a Bedouin camel patrol seized the group and imprisoned them for two weeks in a local jail in Beersheba.

In the 1946 ‘Mapai’ delegation to the ‘Zionist Congress,’ he and Moshe Dayan were named youth representatives.
In 1947, he joined the ‘Haganah,’ a Jewish paramilitary organization, and was assigned the task of purchasing weapons and managing personnel.

He was the director of the Defence Ministry’s delegation in the United States in the early 1950s. He studied English, philosophy, and economics at ‘The New School’ and ‘New York University’ there. He also studied advanced management at ‘Harvard University.’

Through his efforts, Israel was able to strike a trilateral deal with the United Kingdom and France, procure a modern Dassault Mirage III French fighter plane, and construct the “Dimona” nuclear reactor.

In his capacity as Director-General of Israel’s Ministry of Defense, he has been involved in the planning of the 1956 Suez War with the United Kingdom and France from 1954, and has visited Paris several times in this quest.
When Israel decided to go to war against Egypt in 1956, France became Israel’s closest Middle Eastern ally. In Israel’s war against Egypt, the UK and France collaborated with Israel to achieve their goal of seizing control of the Suez Canal by a pre-planned mid-war intervention, putting it under Anglo-French supervision. Their idea, however, failed due to strong opposition from the USSR and the US.

In 1959, he was elected to the Knesset as a member of the ‘Mapai’ party, and he was appointed Deputy Defense Minister, a position he retained until 1965.

In 1965, he and David Ben-Gurion created the ‘Rafi’ party after leaving the ‘Mapai’ party. He was named the new party’s secretary general.
Following that, on January 23, 1968, ‘Mapai,’ ‘Rafi,’ and ‘Ahdut HaAvoda’ combined to establish the ‘Israeli Labor Party.’

Before the 1977 elections, he became the party’s leader. Peres served as acting Prime Minister from April 22, 1977 to June 21, 1977, after then-Prime Minister Rabin resigned due to a scandal.

In the 1992 elections, the ‘Israeli Labor Party’ made a comeback, and Peres was re-elected as Foreign Minister. Jordan signed a ‘Peace Treaty’ with the United States in October 1994.

Following the assassination of Yitzhak Rabin on November 4 of that year, he became Prime Minister of Israel for the second time in November 1995. He was in charge until June 18, 1996.
In 1996, he launched ‘The Peres Center for Peace,’ which aspires to build a foundation of peace amongst the peoples of the Middle East and pushes for social and economic growth.

From 1996 until 1999, he served on the Knesset’s Foreign Affairs and Defense Committee.
He served as Minister of Regional Cooperation from July 1999 to March 2001, and then as Deputy Prime Minister and Minister of Foreign Affairs in the National Unity government until October 2002.
On November 30, 2005, he quit the ‘Israeli Labor Party’ and joined the newly established ‘Kadima’ party to support Ariel Sharon.

In May 2006, after ‘Kadima’ won the elections and Ariel Sharon was elected Prime Minister of Israel, he became Minister for Negev and Galilee Development and Vice Prime Minister.
On June 13, 2007, the Knesset elected him as Israel’s 9th President. He took over on July 15, 2007, and remained in charge until July 24, 2014.

In November 2008, Queen Elizabeth II awarded him the honorary ‘Knight Grand Cross’ of the ‘Order of St Michael and St George.’ President Barack Obama of the United States awarded him the ‘Presidential Medal of Freedom’ in June 2012.

He was awarded the ‘Nobel Peace Prize’ in 1994, along with Ysir Araft and Yitzhak Rabin.
He sponsored and negotiated a peace agreement with the then-chairman of the ‘Palestine Liberation Organization,’ Ysir Araft, as ‘Minister of Foreign Affairs,’ which resulted in the signing of the ‘Declaration of Principles’ in September 1993.

In May 1945, he married Sonya Gelman. She chose to remain hidden from the public eye.
She died of heart failure in her Tel Aviv home on January 20, 2011.

Tsvia (“Tsiki”) Valdan, his daughter, and his two sons, Yoni Peres and Nehemia (“Chemi”) Peres, are all successful individuals in their fields.
Shimon Peres died on September 28, 2016, two weeks after suffering a major stroke.

Shimon Peres was an Israeli politician who was born in Poland and had a net worth of $10 million when he died. Shimon Peres was born in the Polish town of Wiszniew in August 1923. From 2007 to 2014, Peres served as Israel’s ninth President. Peres attended Harvard University and New York University.