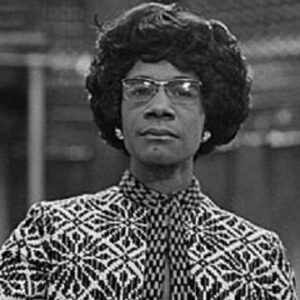 Shirley Chisholm was a leader in politics who had a strong sense of right and wrong and the courage to stand up for what she believed in. She lived with her grandmother in Barbados when she was young. As an adult, she realized how important the traditional British education she got there was. She learned strong values from her education, which shaped her future career. She first worked as a teacher and was also involved in politics at the same time. Even though she was both black and a woman, she joined politics because she was a strong leader. She called this being a “double handicap.” Chisholm became well-known quickly for her fearless way of running for office. Throughout her career, she brought attention to important issues, especially those about education, racial equality, and women’s rights. By running for president, she was trying to make a point and get people to take African-Americans and women seriously as candidates. Chisholm ran for office even though she knew she didn’t have the money or support to be a serious opponent. She surprised everyone by getting more delegates than anyone thought she would.

Shirley Chisholm’s parents, Charles Christopher St. Hill and Ruby Seale gave her the name Shirley Anita St. Hill when she was born in Brooklyn, New York. Both of her parents came from other places. Her father came from Guyana and worked in a factory. Her mother was a seamstress and did housework.

She went to live with her grandmother Ruby Seale in Christ Church, Barbados, when she was three so that she could get a good education. There, she went to “Vauxhall Primary School” to learn.
In 1934, she moved back to New York with her parents and went to “Girls’ High School.” After she finished school, she went to “Brooklyn College” to get her BA.

Chisholm was a teacher in both a nursery school and a daycare center. At the same time, she went to night classes at Columbia University to earn an M.A. in elementary education, which she did in 1952.
During this time, she was in college and joined several groups. She became more interested in politics and started to organize and raise money.

From 1953 to 1959, Chisholm was in charge of the Hamilton-Madison Child Care Center. She joined the Democratic Party at this time and spoke out against the fact that women, African-Americans, and poor people didn’t have much of a voice in politics.

From 1959 to 1964, she worked as an educational consultant for the “New York City Division of Day Care.” During this time, she joined the “Unity Democratic Club,” which fought for black people’s equal rights. She was kicked off the board of directors because she said bad things about the white leaders.

In 1964, she really got started in politics when she won a seat in the “New York State Assembly.” During her four years in the assembly, she worked on 50 bills, and 8 of them were passed.

In 1968, after a successful time in the assembly, Chisholm ran for Congress as a “Democratic Candidate” and beat James Farmer, who was running as a Republican. “Unbought and Unbossed” was the name of her campaign slogan.

From 1968 to 1972, she was in office. At first, she worked in the “Agriculture Department.” She wanted to help the poor people in her district, so she asked to be sent somewhere else. Then, she was put on the “Veterans Affairs committee,” and after that, she was put on the “Education and Labor Committee.”

In 1972, Chisholm ran for the nomination of the Democratic Party to run for president. Even though she didn’t win, she won the primaries in three states and got 152 delegates.

During her time in office, she kept making important contributions. Most notably, she worked to get a bill passed that gave domestic workers minimum wages. She also worked to give people in poorer neighborhoods more opportunities, spoke out against the US military draft, and was against the US getting involved in the Vietnam War.
Chisholm left Congress in 1982 and went back to teaching, but she was still involved in politics.

She held the Purington Chair at “Mt. Holyoke College” in Massachusetts from 1983 to 1987, where she also taught politics and women’s studies. During this time, she also worked for Jesse Jackson, who was running for president. She was a visiting scholar at Spelman College and helped start the National Political Congress of Black Women.

In 1991, she moved to Florida. Two years later, she was nominated to be the US ambassador to Jamaica, but she turned down the job because she was sick.

In 1971, Chisholm helped start a group of African-American members of Congress called the “Congressional Black Caucus.” It worked on issues that were important to African-Americans and tried to make sure they were treated equally in the country.

Shirley Chisholm was inducted into the National Women’s Hall of Fame in 1993. This is an American organization that honors people who have done great things for the country in different fields.
Molefi Kete Asante, a well-known scholar, and philosopher put her on his list of the “100 Greatest African Americans.”

In 1949, Chisholm married a private investigator and politician named Conrad Chisholm. Before they got a divorce, they were married for about 28 years.
Arthur Hardwick, a businessman she married in 1978, died in 1986. She died in Florida at the age of 80 after having a number of strokes.

In college, she had a blind political science professor named Louis Warsoff who thought that Chisholm should go into politics because of her “quick mind and debating skills.”

She died in Ormond Beach, near Daytona Beach, on January 1, 2005, after having several strokes.

Shirley is one of the most popular politicians and one of the wealthiest. Based on what we found on Wikipedia, Forbes, and Business Insider, Shirley Chisholm has a net worth of about $10 million.

When African-American college students were not allowed to join a social club, this famous student started her own club called “Ipothia,” which stands for “In Pursuit of the Highest in All.”