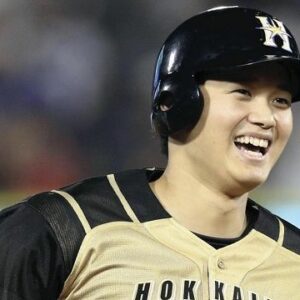 Shohei Ohtani (also spelled Otani) is a Japanese professional baseball player who now plays for the Los Angeles Angels of Major League Baseball (MLB). He is sometimes referred to be Japan’s Babe Ruth because of his uncommon ability to pitch and hit. Ohtani was introduced to baseball by his father, and his tremendous fastball quickly gained national and international notice. Initially, he intended to move to the United States immediately after graduating from high school, skipping the Japanese draft, but the Hokkaido Nippon-Ham Fighters of the Nippon Professional Baseball (NPB) Pacific League pursued him hard. He eventually gave up and was selected first overall in the 2012 draft. Ohtani would play for the Fighters for the following five seasons, leading them to the Pacific League Championship and Japan Series Championship in 2016. He has also received numerous personal honors, including the record for the fastest pitch thrown by a Japanese pitcher and in NPB history, at 102.5 mph. He competed in the 2015 WBSC Premier 12 championship for Japan, where he was a member of the bronze-winning team. He ultimately arrived in the United States in December 2017 as a contract player for the Los Angeles Angels.

Ohtani was born in sh, Iwate, Japan, on July 5, 1994, as the youngest of three children. His father, Toru, a corporate league baseball player and a Mitsubishi plant employee, encouraged both Ohtani and his older brother Ryuta to participate in the sport. He rapidly shown his ability, and by the time he was eight years old, he was a regular in a weekend small league. His mother, who was a national-level badminton player in high school, was also an athlete.
Ohtani was inspired as a kid by Hideki Matsui, a power-hitting left fielder who used to play for the Yomiuri Giants, the only team he ever watched on TV. Pitching piqued his interest as well, although he never considered it to be more than a pastime.
His aptitude was first seen at Hanamaki Higashi High School, when he was a student. He was throwing in the mid-90s at 16 years old, and it took him only another year to hit 99 mph. He was developing into a dynamic player, leveraging his large frame (he was six-foot-five when he was 17). His quick growth, however, resulted in groin and hamstring ailments, which he suffered throughout high school.
His pitching mechanics were problematic during this time. His delivery had become labored and stiff, and he couldn’t keep himself in the strike zone. As he grew more comfortable in his physique, the problems faded.

Shohei Ohtani set the record for the fastest pitch by a Japanese high school pitcher at 99 mph in the early stages of his career. He competed in the 2012 18U Baseball World Championship and finished with an amazing 0-1 win-loss record, 16 strikeouts, eight walks, five hits, five runs, and a 4.35 earned run average in total 10 13 innings pitched.
He had made up his mind to go to the United States after high school to play in the top leagues. Following that, he was courted by some of the world’s most prestigious baseball teams, including the Texas Rangers, Boston Red Sox, New York Yankees, and Los Angeles Dodgers.
On October 21, 2012, he announced his plan to relocate to the United States and perform there. The Nippon-Ham Fighters, led by general manager Masao Yamada, took a major risk by selecting him as their first-round pick regardless, and spent the next four weeks urging him to stay in Japan. They pointed out, among other things, that if he stayed in Japan, he would avoid the rigors of the US lower levels and instead be able to spend his formative years as a player in the MPB, where he might earn millions from a slew of sponsorship deals and be recognized as a national hero.
After much thought, he accepted the Fighters’ offer and made his debut as a rightfielder in the Fighters’ first game of the season on March 29, 2013. He had an exceptionally successful debut year in MPB, finishing the season with a 3-0 record in 11 starts.
The jersey number was assigned (11) He was employed by the Fighters as a rookie in both the outfield and as a pitcher, wearing the same uniform as legendary Yu Darvish. His performance as a batter and pitcher throughout the season earned him a spot on the Pacific League squad for the 2013 All-Star Game.
Ohtani’s place on the squad was cemented during the next two seasons. He continued to play outfield and pitch while also raising his hitting average. In both of these seasons, he was selected to the All-Star Game, and by the end of 2014, his annual pay had risen to 100 million yen.
The 2016 season was his most successful to date. It was his breakout season as a batter, and he continued to dominate on the mound as he had in previous seasons. Ohtani was instrumental in the Fighters reaching the 2016 Japan Series and subsequently winning the championship against Hiroshima Toyo Carp by a score of four games to two. He won the MVP title by a wide margin at the end of the season, receiving 253 out of a total of 254 first-place votes.
In 2017, he appeared in 65 games and hit.332 with eight home runs and 31 RBIs while pitching a 3-2, 3.20 ERA with 29 strikeouts. Later, it was reported that he will ask to be released at the end of the season so that he may play in the 2018 MLB season. He did, however, have to undergo surgery for an ankle injury he received in 2016, which limited his playing time for the year.
On December 8, 2017, he joined the Los Angeles Angels as the team’s newest member. A day later, the contract was finalized.

Shohei Ohtani was a member of the Japanese national squad in the 2015 WBSC Premier 12. The competition, which took place in Japan and Taiwan from November 8 to 21, was won by South Korea, with the United States in second place and Japan in third. Ohtani has the lowest earned run average of the tournament at the end of the series.
He was named to Japan’s 28-man World Baseball Classic roster, however he was forced to withdraw due to an ankle injury.

Shohei Ohtani has been named to the Pacific League Pitcher Best Nine on two occasions (2015 and 2016). In 2016, he was also named to the Designated Hitter Best Nine, making him the only player in NPB history to receive both Pitcher and Hitter honors.
In 2015, he was named the Pacific League Era Leader.
In 2015, Ohtani and Shoto Ono split the Pacific League Battery Award.
He was also named WBSC Player of the Year in 2015.
He won the Nippon Professional Most Valuable Player Award in 2016 following an outstanding season.
He was a four-time All-Star in the National Baseball League (2013-16).

Shohei Ohtani was what the Japanese call a ‘yakyu shonen,’ or a kid who lives, eats, and breathes baseball as a kid. After all these years, nothing has changed. He is still a down-to-earth and lovely country kid who is unaffected by fame or money. He delegates his financial management to his parents. His mother puts roughly $1,000 in his personal bank account every month in an effort to help him grow financial maturity, but according to sources, he rarely uses it. Nez Balelo of CAA Baseball is Ohtani’s current sports agent.

Shohei Ohtani has a net worth of $10 million.