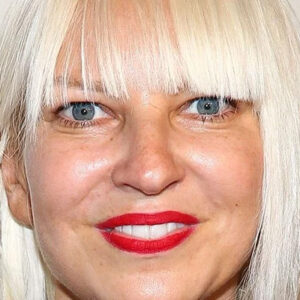 Sia Sia (Kate Isobelle Furler) is a well-known Australian singer-songwriter, music video director, and record producer. Over the course of her two-decade career, she has experienced many highs and lows. In the mid-90s, she debuted as a vocalist in her native Australia with the Adelaide acid jazz band ‘Crisp.’ ‘OnlySee’ was her debut studio album. She moved to England to further her music career and began collaborating as a vocalist with bands such as ‘Zero 7’ and ‘Jamiroquai.’ She then signed with ‘Dance Pool’ and released ‘Healing Is Difficult,’ her second studio album. Her third album, ‘Colour the Small One,’ was released after she signed with ‘Go! Beat,’ and it was a commercial success, prompting her to go to New York, USA. Sia resigned as a recording artist after releasing two more albums, ‘We Are Born’ and ‘Some People Have Real Problems,’ and focused on writing songs for others. She collaborated with musicians such as Rihanna, David Guetta, and Flo Rida as a result of this. With her studio albums ‘1000 Forms of Fear’ and ‘This Is Acting,’ she returned to mainstream singing with a bang, with the former debuting at the top of the US Billboard 200.

Sia was born Sia Kate Isobelle Furler to Phil Colson and Loene Furler on December 18, 1975 in Adelaide, South Australia. Her father is a musician, while her mother teaches art. She attended ‘Adelaide High School.’
Sia was introduced to music at a young age because to her musician father and actor-singer uncle Kevin Colsan. Her father also had acquaintances from the Australian rock band ‘INXS,’ as well as a close friend Colin Hay from another Australian rock band, ‘Men at Work,’ who most likely influenced her musical tastes.
Sting, Stevie Wonder, and Aretha Franklin were among her early musical influences, and she would often emulate their performances as a child.

After ‘Crisp’ disbanded in 1997, Sia released her debut studio album, ‘OnlySee,’ on December 23 of that year, which used her entire name rather than just Sia, as on her subsequent releases. There were 13 tracks on the album, and 1200 copies were sold.

Sia relocated to London in order to further her music career and be closer to her lover, Dan Pontifex. Pontifex, however, was killed in a car accident before she could leave Australia. Sia was devastated by the tragedy and eventually fled to London, where she worked as a backing vocalist for British funk and acid jazz band ‘Jamiroquai.’

She was also a member of the English musical duet ‘Zero 7’. She eventually rose to the position of “unofficial” lead singer for the downtempo band, traveling with them and providing vocals to their first three studio albums.
Tracks ‘Destiny’ and ‘Distractions’ from the first album ‘Simple Things’ (2001); tracks ‘Somersault’ and ‘Speed Dial No.2’ from the second album ‘When It Falls’ (2004); and five tracks from the third album ‘The Garden’ (2005) all feature her vocal talents (2006).

Meanwhile, she signed a contract with ‘Dance Pool,’ a sub-label of ‘Sony Music,’ and released her debut single ‘Taken for Granted’ on May 19, 2000. The song was included on her second studio album, ‘Healing Is Difficult,’ which was released in 2001 in the UK and 2002 in the US, and reached No. 10 on the UK Singles Chart.

She left Sony Music and signed with ‘Go! Beat’ after being dissatisfied with the promotion of ‘Healing Is Difficult.’ Her third studio album, ‘Colour the Small One,’ was released on January 19, 2004, although it failed to create an impression.

In 2005, she relocated to the United States, where she began traveling across the country with the help of her manager, David Enthoven.

‘Some People Have Real Problems,’ her fourth studio album, was released on January 8, 2008, and sold roughly 20,000 copies in its first week. It opened at #26 on the Billboard 200 in the United States, making it her first album to do so. It was chosen as iTunes’ Top Pop Album of 2008.

In Australia, ‘Some People Have Real Problems’ charted at #41 and was awarded gold certification by the ‘Australian Recording Industry Association’ in 2011. Her debut video release, ‘TV Is My Parent,’ was released on May 19, 2009, and included four music videos, recordings from a 2007 live concert at New York City’s ‘Hiro Ballroom,’ as well as some “behind the scenes” footage. In 2009, it earned her the ‘ARIA Music Award’ for Best Music DVD.
On June 18, 2010, she released her fifth studio album, ‘We Are Born,’ which debuted at #2 on the Australian Albums Chart and reached #37 on the US Billboard 200.

‘We Are Born’ garnered her two ‘ARIA Music Awards’ in 2010 and gold accreditation from the ‘Australian Recording Industry Association’ in 2011. Sia began to backtrack from all the flash and glamour, including donning a mask and refusing to perform promos, as she struggled to cope with her growing fame and desire for a private existence. She became addicted to booze and drugs over time and even considered suicide.

During this time, her new manager, Jonathan Daniel, suggested that she start writing songs for other artists. Thus began a new chapter in her life, one in which she abandoned her career as a recording artist in favor of a career as a songwriter.

Writing ‘Titanium’ (2011) for David Guetta, ‘Wild Ones’ (2011) for Flo Rida, and co-writing ‘Diamonds’ (2012) with Benny Blanco and StarGate for Rihanna are just a few of her successful collaborations as a songwriter.
With her sixth studio album, ‘1000 Forms of Fear,’ released on July 4, 2014, she made a spectacular comeback as a recording artist. It debuted at the top of the US Billboard 200 and was certified gold by the Recording Industry Association of America (RIAA), propelling her to new heights of stardom.

The lead single from ‘1000 Forms of Fear,’ ‘Chandelier,’ got to #8 on the Billboard Hot 100 in the United States. She received four Grammy nominations for the song at the 57th Annual Grammy Awards in 2015.
Her seventh studio album, ‘This Is Acting,’ was released on January 29, 2016, and it not only charted at No. 1 in Australia and No. 4 on the US Billboard 200, but it also earned her a Grammy nomination for ‘Best Pop Vocal Album.’

‘Cheap Thrills,’ from her album ‘This Is Acting,’ propelled her to the top of the Billboard Hot 100 chart. The song reached number one in over twenty countries and received numerous awards, including a quadruple platinum certification in Australia.

She had a love relationship with Dan Pontifex, who died in a car accident. She had an affair with JD Samson from 2008 to 2011. She married documentary filmmaker Erik Anders Lang in August 2014, but the couple divorced in December 2016. She is a vegan who has volunteered for various animal protection organizations.

Sia Furler has a net worth of $30 million.