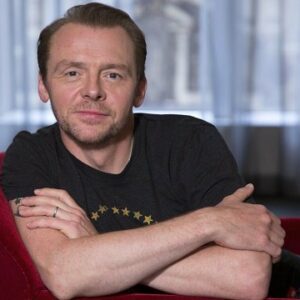 Simon Pegg is a British actor, film producer, and filmmaker who has appeared in films such as ‘Shaun of the Dead,’ ‘Hot Fuzz,’ and ‘Spaced.’ The actor began his career in the entertainment industry as a stand-up comedian before moving on to acting and eventually film production and direction. He collaborates frequently with Edgar Wright, Jessica Hynes, Nick Frost, and Dylan Moran, with whom he has created some of his best work. As a kid, he was a big fan of horror films and also enjoyed comedies. He was always musically inclined as a child, and as a teenager, he used to play drums in a band. He studied drama at university after deciding early in life that he wanted to be an actor. He began performing stand-up comedy after graduating before establishing himself as a stage comic. With the comedy show “Faith in the Future,” in which he played a naive young guy named Jools, he made the move from stage to television. The sitcom lasted three seasons and aided him in landing jobs on other television shows. Following his breakthrough on television, he moved into filmmaking, where he made a reputation for himself with the film “Shaun of the Dead.”

John Beckingham and Gillian Rosemary have a son named Simon. His father was a keyboard dealer and jazz musician. When he was seven years old, his parents split and his mother remarried. He used his stepfather’s surname, Pegg, as his own.

He went to many schools as a kid, including Castle Hill Primary School and Gloucester’s The King’s School.
He studied English literature and theatre at Stratford-upon-Avon College. He studied drama at the University of Bristol and received his Bachelor’s degree.

In 1991, he began performing stand-up comedy in local venues. He relocated to London to pursue a career as a full-fledged comedian, performing his routines in the United Kingdom, Ireland, Australia, and New Zealand.

He began acting in sketch comedies such as ‘Faith in the Future’ and ‘Big Train.’ He also appeared on a “Saturday Night Live” episode. On the set of ‘Six Pairs of Pants,’ he met Edgar Wright and Jessica Stevenson, who would go on to become good friends and eventual business partners.

With Jessica Stevenson, he co-wrote and starred in the television sitcom “Spaced.” Edgar Wright was in charge of the series’ direction. The series aired from 1999 to 2001 and received two British Academy Television Award nominations.

He made the transition to the big screen in the late 1990s, appearing in films such as ‘Tube Tales’ and ‘Guest House Paradiso.’

He co-wrote and starred as Shaun in the 2004 zombie comedy film ‘Shaun of the Dead.’ He played a man who is dealing with family issues while also having to cope with zombies. The picture was both critically and commercially successful.

In the 2006 film ‘Mission: Impossible III,’ he played Benji Dunn, an I.M.F technician. In 2011, he returned to the role in the sequel to the franchise, ‘Mission: Impossible – Ghost Protocol.’ In the latter, he played a significant role.
He teamed up with Edgar Wright once more to write the action comedy ‘Hot Fuzz,’ which was directed by Wright. The story follows two police officers as they investigate a string of inexplicable deaths in a town.

In 2011, he co-wrote and performed in the science fiction comedy ‘Paul,’ in which he played Graeme Willy. The plot centres around two friends who meet an extraterrestrial named Paul who is exceedingly ugly and their experiences with him.

‘Hector and the Search for Happiness’ and ‘The Boxtrolls’ are two of his upcoming projects.

The film ‘Shaun of the Dead,’ which he co-wrote and starred in, is his most well-known work. The film earned positive reviews and was well-liked by critics. In 2004, the magazine ‘Total Film’ ranked it the 49th greatest British film of all time.

One of his most well-known works is the action comedy ‘Hot Fuzz,’ which he co-wrote with Edgar Wright and starred in as Nicholas Angel, a committed police officer. The film received a lot of positive feedback and was a major critical and economic success.

Since July 2005, he has been married to Maureen McCann. The pair has a daughter together.

He was a drummer for a band named “God’s Third Leg” when he was a youngster.

Simon Pegg has a net worth of $25 million and is a British actor, writer, producer, and comedian. Simon Pegg is best known for co-creating the sitcom “Spaced” in the United Kingdom. Following that, he garnered international acclaim for co-writing and starring in three Edgar Wright comedies: “Shaun of the Dead,” “Hot Fuzz,” and “The World’s End.” Pegg has also appeared in “Doctor Who,” “Star Trek,” and “Star Wars,” among other popular science-fiction franchises.