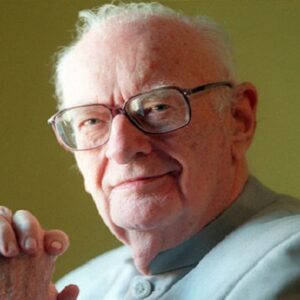 Sir Arthur Clarke was a science fiction writer, inventor, and futurist from the United Kingdom. Clarke, Robert Heinlein, and Isaac Asimov were known as the “Big Three” of science fiction for a long time. He was a multi-faceted character who served in the Royal Air Force during WWII and was the chairman of the British Interplanetary Society. He was a daring individual who moved to Sri Lanka to pursue his passion for scuba diving—and by chance discovered the ruins of an ancient temple. He was a prolific writer who penned over 100 novels as a result of his excellent observation, inventiveness, and scientific mindset. He possessed an extraordinary capacity to foresee futuristic technology long before they were realized. He anticipated satellite communication, space shuttles, super-fast computers, and many other breakthroughs in his works, all of which became a reality. His writings mainly centred around space travel, explorations, and futuristic technology, as he had worked in scientific research. His first work, ‘The Sands of Mars,’ is about the exploration of Mars’ surface, while his second, ‘Prelude to Space,’ is a science fiction tale about humans traveling to the moon. The incredible thing is that they were penned in the early 1950s, decades before space flight became a reality!

Clarke was born to a farmer and his wife in Somerset, England. He spent his childhood stargazing and reading popular publications on the property. Huish Grammar School was his alma mater.

During the pre-war years, he worked for the Board of Education as a pension auditor. He served in the Royal Air Force as a radar specialist during World War II.

In May 1943, he was commissioned as a Pilot Officer. He was promoted to Flying Officer within a few months. He went on to become the Royal Air Force’s chief training instructor, and by the conclusion of the war, he had risen to the rank of Flight Lieutenant.

Following the war, he enrolled at King’s College, London, where he received a first-class degree in mathematics and physics.

He was the chairman of the British Interplanetary Society for two terms (1946-47; 1951-53).
Clarke concentrated on his writing career beginning in the 1950s. In 1951, he released his debut novel, ‘The Sands of Mars.’
He released his novel ‘Prelude to Space,’ which he wrote in 1947, in 1953. The story revolved around interplanetary travel. The same year, another novel, ‘Childhood’s End,’ was published.

The commander of an experimental giant-sized helium-filled airship meets with an accident in his novella ‘A Meeting with Medusa.’ It was first published in 1971 and has subsequently been featured in numerous of his work compilations.

One of Clarke’s most well-known works is the 1968 future fiction ‘2001: A Space Odyssey.’ The story tackles a number of important topics, including the hazards of nuclear war, technological hurdles, and artificial intelligence.
‘Rendezvous with Rama,’ published in 1972, is widely regarded as one of his most important works. The novel was nominated for the Nebula Award, Hugo Award, and Jupiter Award in the category of “Best Novel.”
Space elevators and geostationary orbits were described in his novel ‘Fountains of Paradise’ (1979). It received numerous nominations and awards.

In 1961, UNESCO awarded him the coveted Kalinga Prize for Science Popularization for his “extraordinary skill in communicating scientific ideas to lay people.”

In 1963, he received the Stuart Ballantine Medal, a science and engineering prize sponsored by the Franklin Institute in Philadelphia.

He has won numerous Nebula and Hugo Awards, which are granted for the best piece of fiction in the science fiction and fantasy genres.

In the Queen’s Honours List of 1998, he was given the Knight Bachelor of the Order of the British Empire for his contributions to literature and astronomy.

In 1953, he married Marilyn Mayfield. The couple split up after only a few months of marriage, but did not divorce until 1964. They weren’t married and didn’t have any children together.

Clarke moved to Sri Lanka in 1956 and established friends with Leslie Ekanayake, a Sri Lankan. He did not make his sexuality public, but it was widely assumed that he was homosexual.

During his later years, he struggled with post-polio syndrome and had to rely on a wheelchair. In 2008, he died of respiratory failure at the age of 90.

The Arthur C. Clarke Awards, named after him, are given out every year in the United Kingdom for science fiction writing.

Arthur is one of the wealthiest novelists and one of the most well-known. Arthur C. Clarke’s net worth is estimated to be $1.5 million, according to Wikipedia, Forbes, and Business Insider.

His science fiction story ‘A Fall of Moondust’ was the first to be selected as a Reader’s Digest Condensed Book.
The Arthur C. Clarke Institute for Modern Technologies is one of Sri Lanka’s premier research institutes.
In the Colombo Central Cemetery, he is interred beside his Sri Lankan companion Leslie Ekanayake.