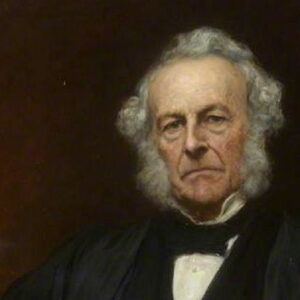 Irish mathematician and physicist Sir George Gabriel Stokes, 1st Baronet, PRS, was also a baronet. He was known for his research on how viscous fluids move, especially his law of viscosity, which describes how a solid sphere moves in a fluid, and Stokes’ theorem, which is a basic theorem of vector analysis. His important work in fluid dynamics, optics, and mathematical physics led to a lot of new scientific research and discoveries in the future. He got a fellowship and graduated from Pembroke College, Cambridge, as a senior wrangler and first Smith’s prizeman. He worked closely with James Clark Maxwell and Lord Kelvin, and the three of them did a lot to make the Cambridge school of mathematical physics well-known in the middle of the 1800s. He was chosen to be the Lucasian professor of math at Cambridge, a position he held until he died. He was the first person since Isaac Newton to hold all three positions at the Royal Society: Lucasian professor, secretary, and president. He was also the first person to hold all three positions at the same time.

On August 13, 1819, George Stokes was born in Skreen, County Sligo, Ireland, to a family of evangelical Protestants. Gabriel Stokes, his father, was the rector of the parish of Skreen. Elizabeth Haughton was his mother.
He was the sixth and last child. He had two sisters and three brothers. His brothers became priests in the future.

His father and a clerk in his father’s parish taught him the basics of school. In 1832, he moved to Dublin, where he went to school for three years at the Reverend R.H. Wall’s school on Hume Street.

In 1835, he moved to England and went to school at Bristol University, where he won many math prizes. The years he spent at Bristol was very important for getting him ready for college at Cambridge.

He went to Pembroke College in Cambridge, England, in 1837 and graduated four years later as the first Smith’s prizeman and a senior wrangler. When he left college, they gave him a Fellowship.

In the early 1840s, he wrote papers about the steady motion of incompressible fluids, the equilibrium and motion of elastic solids, and the effect of internal friction on a swinging pendulum.

He came up with the phrase “Strokes’ Law” to describe the force of friction on spheres with very small Reynolds numbers. If you know the size and density of the sphere and the density of the liquid, you can use the expression to figure out the viscosity of any liquid.

Between 1845 and 1849, he wrote several papers about the way light bends, the bands in a spectrum, and the way light bends. In a paper about the dynamical theory of diffraction, he said that the plane of polarization must be perpendicular to the direction of propagation.

He helped look into many train accidents and said that the main reasons bridges fell down were a large amount of cast iron used and the effects of wind loads on the bridge. Because of what he said about the Dee bridge disaster in May 1847, he was made a member of the Royal Commission that looked into the disaster.

In 1852, he wrote a paper about how the wavelength of light can change. In this paper, he proposed the fluorescence phenomenon, which says that some materials can change invisible ultraviolet radiation into visible radiation with a longer wavelength. This change is shown by the Stokes shift.

In the same year, he presented a different paper about the composition and resolution of polarized light streams when they pass through different sources. The following year, he looked into the metallic reflections that some non-metallic materials show.

In 1860, he worked on how much light a pile of plates reflected or how much light went through them. Two years later, he gave a report on Double-Refraction to the British Association. This is a phenomenon in which different parts of a crystal have different refractive indices.

By doing a lot of research on fluid dynamics, he was able to explain how ripples and waves in the water go away, how clouds stay in the air, and what the minimum skin resistance needed for ships is.

In 1849, Stokes was given a job at Cambridge as the Lucasian professor of mathematics. He was in charge until his death in 1903.

In 1852, the Royal Society gave him the Rumford Medal for his work on the length of light waves. In 1893, they gave him the Copley Medal.
In the UK, Queen Victoria made him Baronet Stokes of Lensfield Cottage in 1889. In 1916, the title was no longer used.

Susanna Elizabeth and Dora Susanna died as babies, and Dr. William G. Gabriel killed himself when he was 30 years old. Arthur, another son, became a baronet, and Isabelle Lucy, his daughter, helped him write a book about his life.
He died in Cambridge, Massachusetts, on February 1, 1903, and was buried in the Mill Road cemetery.