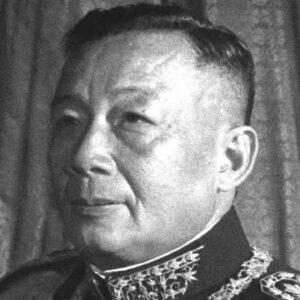 Sisavang Vatthana was the second oldest of five siblings when he was born in the Kingdom of Laos. This little prince was taken to France to continue his studies when he was eleven years old. After earning his degree in Paris in subjects like history and diplomacy, he returned home and received private instruction in his mother tongue. He began to speak on behalf of his kingdom when he was a small boy, attempting to convince the Japanese military to free his country. As soon as his father passed away, he was made prime minister and afterward king. Before he could be recognized as the King of Laos, he was compelled to resign. However, sources claim that he was a monarch who cared about the well-being of his country, traveling to other nations to strengthen diplomatic ties and establish the kingdom’s political neutrality. Three princes, the royalist Boun Oum, the socialist Souphanouvong, and the neutralist Souvanna Phouma, formed a coalition government under his rule. Although this was a move to create political unification in the nation, the government was short-lived. Soon after their split, the communist faction grabbed control of the kingdom and did away with the monarchy. The King was forced to abdicate his throne in addition to being imprisoned in the internment camp till his death.

King Sisavang Vong and Queen Kham-Oun I welcomed Sisavang Vatthana into the world on November 13, 1907, in the Kingdom of Laos’ Royal Palace in Luang Prabang. Princess Khampheng, Princess Sammathi, Prince Souphantharangsri, and Prince Sayasack were his four siblings.

The young prince studied history, diplomacy, and science while attending elementary school in Montpellier, France, and then graduated from the ‘École Libre des Sciences Politiques’ in Paris. He returned to Laos after completing his studies, but he needed to be taught how to speak his home dialect from scratch because he had forgotten how.

Sisavang was transported to Saigon, Vietnam, during World War II, when he fiercely denounced the Japanese invasion of Laos and pleaded with them to grant his Kingdom independence from France.
Vatthana was appointed prime minister of the Kingdom of Laos in 1951. He served in that position until his father became ill, at which point the Prince was named acting head of state.

He succeeded his father as King in 1959, however, he was never properly crowned. He visited a number of other countries while in power as Laos’ ambassador.

The “National Assembly” members chose Prince Boun Oum, a Laotian from the Champassak province, to serve as prime minister in 1961. The three Princes Oum, Souphanouvong, and Souvanna Phouma were persuaded to form a coalition administration by King Vatthana.

The coalition was established the following year, in 1962, with the three princes serving as the public faces of the kingdom’s royalist, communist, and neutralist lobbies.

During a journey to sign the “Geneva Pact” in March 1963, Sisavang had a meeting with American President John F. Kennedy. Along with his Prime Minister, Prince Souvanna Phouma, he had also traveled to Moscow.

A number of uprisings occurred in 1964, which led to the dissolution of the coalition government the three princes had formed. The right-wing and neutralist lobbies were kept together after the communist group “Pathet Lao” severed ties with the government.

The “Laotian Civil War” was launched after the Marxist “Pathet Lao” decided he no longer wanted to establish a coalition government.

The “Pathet Lao” took over all the cities in Laos one by one throughout the protracted civil war, until taking over the final town of Vientiane in 1975. The Prince Souvanna Phouma-led Vientiane government was overthrown.

After the triumphant “Pathet Lao” government dissolved the monarchy on December 2, King Sisavang of Laos was compelled to abdicate. The King was demoted to holding the unimportant title of “Supreme Advisor to the President.”

The overthrown King moved to a smaller house since he did not want to go into exile. He gave the government possession of his palace, which was afterward turned into a museum.

With the possibility that the King may organize a revolt, the communist administration was unable to sleep at night. Thus, the King was apprehended and sent to the Viengxai area of northeastern Laos along with his wife, kids, and brothers.

The Houaphan Province of Laos’ royal family was imprisoned at a prison camp in the city of Xam Neua. The facility, called “Camp Number One,” was intended for notable political detainees, and members of the royal family frequently paid visits there. The Laotian King was imprisoned right up to his passing.

The former King of Laos is renowned for having represented his country as an international diplomat, ensuring that the kingdom gained independence from France and Japan.

On August 7, 1930, Sisavang wed Queen Khamphoui, and the two went on to have five children.
Along with his parents, his son, crown prince Vong Savang, was taken prisoner by the communist regime. Prince Sauryavong Savang evaded capture by swimming across the Mekong River to Thailand.

Her daughter, Princess Savivanh Savang Manivong, fled to France while her family was imprisoned. About the other kids, Prince Sisavang Savang and Princess Thala Savang, not much is known.
There has been a lot of conjecture over the passing of the last King of Laos. According to some stories, the King, Queen, and Crown Prince all died of malaria in 1978.

While Kaysone Phomvihane, a former president of the nation, claims that the King survived till the age of 77, other stories claim that he passed away two years later.

One of the wealthiest and most well-liked Kings is Sisavang. Sisavang Vong has a net worth of $5 million, according to our analysis of data from sources including Wikipedia, Forbes, and Business Insider.