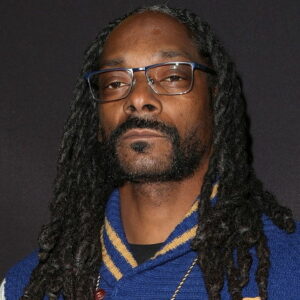 Calvin Broadus, better known by his stage name ‘Snoop Dogg,’ is an American rapper and media personality who rose to prominence in the 1990s as one of the most well-known names in gangsta rap. Snoop Dogg has a long and illustrious career as a singer, but he has also starred in a number of films and television series. He was born in the United States and began singing and rapping at a young age. As a teenager, he was arrested multiple times for drug possession before deciding to pursue a career in hip-hop seriously. Snoop’s talent was eventually noticed by Dr. Dre, the legendary producer-rapper, and his debut album ‘Doggystyle’ was published, introducing him to the world of music. He became known for his laid-back rapping style with tracks like “Who Am I (What’s My Name)?” and “Gin and Juice,” and his name became synonymous with 1990s gangster rap. He’s had multiple popular albums throughout the years, including ‘The Doggyfather,’ ‘No Limit Top Dogg,’ ‘R&G (Rhythm & Gangsta): The Masterpiece,’ and ‘Doggygumentary.’ Snoop Dogg has starred in a number of films and has been a regular guest on television shows throughout his successful career. He has also been accused of various criminal activities throughout his life, but has been acquitted of all allegations. His music and legal troubles have kept him in the news since the beginning of his career.

He has a passion for singing, rapping, and playing the piano since he was a child. He graduated from Long Beach Polytechnic High School in 1989.

He was caught shortly after graduating from high school after being found in possession of drugs, and he spent the following three years in and out of prison.

During this time, he and his cousins began recording handmade tapes under the name ‘213’. Dr. Dre, an influential producer, heard one of his early solo freestyles over En Vogue’s “Hold On” and invited him to an audition.

His second album, ‘Tha Doggfather,’ was released in 1996, and while it received great reviews, it was not as successful as his first.

He launched his album “Paid tha Cost to Be da Bo$$” in 2002, which included the hit singles “From tha Chuuuch to da Palace” and “Beautiful.”

His album R&G (Rhythm & Gangsta): The Masterpiece, which included the single “Drop It Like It’s Hot,” was published in 2004. Another album, ‘The Hard Way,’ was published the following year, featuring the track “Groupie Luv.”

He changed his stage name to Snoop Lion in 2012. His documentary ‘Reincarnated’ was released in March 2013, followed by his new studio album of the same name the following month.

One of his most successful compositions was the track “Drop It Like It’s Hot” from his 2004 album “R&G (Rhythm & Gangsta): The Masterpiece.” It became Snoop’s first No. 1 single in the United States, charting at No. 1 on the Billboard Hot 100.

He won three Billboard Music Awards in 1994: ‘Top Billboard 200 Album Artist – Male,’ ‘Top R&B Album Artist,’ and ‘Top R&B Album Artist – Male.’
For the song ‘Doggy Dogg World,’ he won the MTV Video Music Awards in the category of ‘Best Rap Video’ in 1994.
He received the American Music Award for ‘Favorite Rap/Hip-Hop Artist’ in 1995.
For his song ‘Drop It Like It’s Hot,’ he received the ‘International Dance Music Award’ in the ‘Best Rap/Hip-Hop Dance Track’ category in 2005.
He has also won the ‘MOBO Award,’ ‘Source Award,’ ‘Stony Award,’ and ‘Urban Fashion Award,’ among others.

Snoop Dogg married Shante Taylor, his high school sweetheart, in 1997. Cordé and Cordell, two males, and Cori, a daughter, are the couple’s three children.
Dogg filed for divorce from Shante in 2004, citing irreconcilable differences as the reason. In January 2008, the pair renewed their wedding vows after four years.

Snoop Dogg’s net worth is believed to be $135 million.