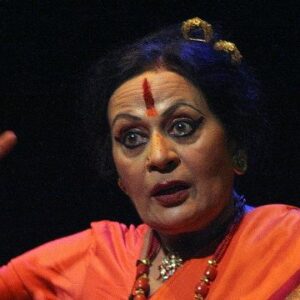 Sonal Mansingh is a well-known Indian classical dancer and choreographer known for her Odissi style of dancing. She is a dancer, a philosopher, a social reformer, a thinker, a choreographer, and a teacher. Despite the fact that dance was not seen as a respectable job at the time, she fought her way to the top and attained proficiency in the art form, which allowed her to connect with the rest of the world. Dance, she believes, is the vehicle through which she may express the voices of the voiceless. Her dancing performances are spectacular, and her work has always been well-received, resulting in a lot of fame and money for her. Her corpus of work is unique in the history of Indian dance in terms of range and scope, and it encompasses a variety of traditional and contemporary topics. Her recent work has focused on topics relating to women, the environment, jail reform, and the reinterpretation of old stories. She is a captivating dancer as well as a skilled orator, and she has the ability to impact a large number of people in her community through her active participation in seminars, conversations, workshops, and lectures. Dance, she believes, should address societal issues, and dancers must have a passion for literature, poetry, languages, sculpting, and painting, as dance is a rare synthesis of all of these arts.

Arvind Pakvasa and his wife, Poornima Pakvasa, a well-known social worker, gave her birth on May 1, 1944 in Mumbai, British India. She was their second child out of three.
Mangal Das Pakvasa, her grandpa, was a famous independence warrior who believed in women’s equality. He boosted her artistic aptitude and encouraged her to pursue dancing from an early age, alongside her parents.

She began learning Manipuri dance from an instructor in Nagpur when she was four years old. She thereafter began studying Bharatnatyam with various gurus from the Pandanallur School.

She came to Bangalore at the age of 18 to study Bharatnatyam under Prof. U. S. Krishna Rao and Chandrabhaga Devi. Dr. Mayadhar Mansingh, her father-in-law, introduced her to Odissi guru Kelucharan Mohapatra in 1965, and she began her Odissi dance instruction.

She began her dance career in 1962 and has since performed in several of her own choreographic works as well as being in charge of a huge number of group shows.

She performed to the poems ‘Mary Magdalane’ and ‘Sanyasi- Upagupta’ in the 1970s. She also performed dance performances on Kalidasa’s ‘Meghdootam’ and ‘Kumara-Sambhavam’.

She established the Centre for Indian Classical Dances (CICD) in New Delhi in 1977 to teach Indian classical dance to pupils. The organization is still working to promote performing arts and preserve India’s cultural heritage.

She performed several special things in Odissi and Bharatnatyam dance genres for her audience from 1977 until 1993.

She developed, produced, and starred in the dance-drama ‘Ashta-Nayika’ in 1993, which explored the emotional stages of eight women in love.

At the International Festival of Perth, Australia, she presented ‘Draupadi,’ her rendition of Draupadi’s predicament when it is decided that she should be’shared’ among the five brothers.

Following the terrorist attacks on the World Trade Center in 2001, she traveled the United Places, performing in states such as North Carolina, South Carolina, and Atlanta.

Her dance performances and talks at numerous institutions around North America in 2000 were well-received in both artistic and academic circles.

She was awarded the coveted Sangeet Natak Akademi Award in 1987.

She received the Rajiv Gandhi Excellence Award in 1991.

In 1992, she became the Republic of India’s youngest recipient of the Padma Bhushan, the country’s third highest civilian award.

She received the Indira Priyadarshini Award in 1994.

Padma Vibhusan, the Republic of India’s second highest civilian award, was bestowed upon her in 2003. She was only the second Indian woman dancer to be honored in this way.

In 2006, she was awarded the Madhya Pradesh government’s Kalidas Samman.

G.B. Pant University in Uttarakhand awarded her an honorary doctorate of science degree in 2007.

At an art festival, she met Lalit Mansingh, a former Indian ambassador, and the two married soon after. He was assigned to Geneva as a diplomat, and she returned to Delhi after two years to pursue her passion for dancing. The pair eventually divorced.

She married a German and went to Canada after her first divorce. Unfortunately, this marriage ended in divorce as well, and she returned to Delhi.

Prakash Jha, a well-known Hindi film filmmaker, released a documentary about her in 2002 called ‘Sonal.’ For the year, the film won the National Film Award for Best Non-Feature Film.

The estimated net worth of Sonal Mansingh is unknown.