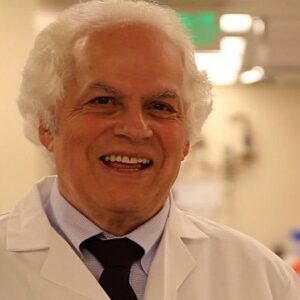 More Facts of Stanley B. Prusiner

Stanley B. Prusiner is an American neurologist and biochemist. In 1997, he won the Nobel Prize in Physiology or Medicine for his work on prions. He made up the word “prion,” which comes from the words “proteinaceous” and “infectious,” to describe a group of self-replicating infectious pathogens that are mostly or entirely made of protein. As the son of an architect, he grew up in the same way that most American boys from wealthy families do: in comfort. He was smart and interested in science from a young age. When he made a bug repellent as a schoolboy, people called him “the little genius.” He went to the University of Pennsylvania and got a degree in chemistry. He then went to the University of Pennsylvania School of Medicine and got his M.D. Before becoming a professor of neurology and biochemistry at the University of California, San Francisco School of Medicine, where he had done his internship, he spent a few years doing research in biochemistry. In the course of his research, he started to look into spongiform encephalopathies, a group of neurodegenerative diseases that cause dementia and death in both people and animals. This work led to the important discoveries that won him the Nobel Prize. Not only did he win the Nobel Prize, but he also won a number of other important science awards.

Stanley Benjamin Prusiner was born to Miriam (Spigel) and Lawrence Prusiner on May 28, 1942, in Des Moines, Iowa, United States. His architect father was called up to serve in the US Navy not long after Stanley was born. When his father wasn’t around, the little boy spent a lot of time with his mother and grandmother. After the war was over, his father went back to work as an architect.

Stanley went to Walnut Hills High School, where his work on a bug spray made him known as “Little Genius.” He went to the University of Pennsylvania to study Chemistry because he was interested in science.

He took a lot of science classes, but he also studied philosophy, history of architecture, economics, and Russian history. Eventually, he got his Bachelor of Science in chemistry.

Stanley B. Prusiner went to work at the National Institutes of Health (NIH), where he studied glutaminases in E. coli in the lab of Earl Stadtman. During his time at the NIH, he learned a lot about how research is done. By the end of his time there, he had decided to do a residency in neurology, which he thought would be a good way to start a career in research.

In 1972, he started his residency in the Department of Neurology at the University of California, San Francisco (UCSF). There, he took in a patient with an infection called Creutzfeldt-Jakob disease (CJD), which caused the body’s defenses to do nothing. He was interested in the fatal, degenerative disease that killed his patient in the end.

He started to learn more about CJD and started looking into what caused it and the diseases that seemed to be related to it, such as kuru in the Fore people of New Guinea and scrapie in sheep.

He started a lab to study scrapie in 1974. After years of hard work, he said in 1982 that he had found the agent that causes scrapie. In a manuscript he wrote about his research, he used the word “prion” to describe a pathogen that was mostly or entirely made of proteins.

When Prusiner’s research came out, his peers in the scientific community didn’t agree with it. But he kept working on his research, and by the beginning of the 1990s, most scientists agreed that prions existed.

In 1996, a new form of Creutzfeldt-Jakob disease appeared in Great Britain. This brought Prusiner’s work to the public’s attention. In 1997, the Nobel Prize in Physiology or Medicine was given to him because of his new interest in how important his research was.

In 2001, he started a company called InPro Biotechnology, Inc. to further develop and sell technologies and discoveries made in the labs at UCSF.

During his career, he has worked as both a full-time professor and a visiting professor at both UCSF and UC Berkeley. At the moment, he is in charge of the research lab at UCSF’s Institute for Neurodegenerative Diseases, where they study prion disease, Alzheimer’s disease, and tauopathies.

The Richard Lounsbery Award was given to Stanley B. Prusiner and Bert Vogelstein in 1993 for their unique and exciting discoveries about how neurodegenerative and cancerous diseases start.

In 1994, Prusiner was the winner of the Albert Lasker Award for Basic Medical Research.
He won the Nobel Prize in Physiology or Medicine in 1997 “for his discovery of Prions, a new biological principle of infection.”

He has two daughters with his wife, Sandy Turk.