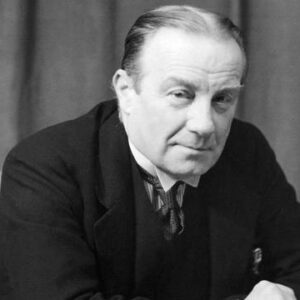 Stanley Baldwin, 1st Earl Baldwin of Bewdley, KG PC FRS was a British Conservative politician who was Prime Minister three times between 1923 and 1937. Between the two world wars, during the General Strike of 1926 and the Abdication Crisis of 1936, he was in charge of the government. Baldwin came from a family of rich industrialists, and he helped his father start Baldwins Ltd., which was one of the largest iron and steel companies in Britain. His mother’s family liked art and literature, and Rudyard Kipling, a writer and poet, was her first cousin. Baldwin wasn’t very smart in politics, but he made up for it with his values of honesty, kindness, and peacemaking, which made him popular with the British people. He has left the impression of being a wise old man and the personification of British middle-class moderation in a turbulent and dangerous European world. He wasn’t known as a great thinker because he had to share the spotlight with people like Lloyd George, Winston Churchill, and Neville Chamberlain. However, he was good at making quick decisions, like when he got the 1936 Public Order Act passed.

Stanley Baldwin was born in Worcestershire, England, on August 3, 1867. His parents were Alfred and Louisa Baldwin. His family owned a business that made iron and steel.

He went to school at St. Michael’s and Harrow School and then studied history at Trinity College, University of Cambridge. He was on the college debate team (Magpie & Stop), but he never spoke up, so he was asked to leave. He got a third-class degree and went home.

At home, he helped with the family business and later went to Mason College, which is now the University of Birmingham.

In his teens, he was a Second Lieutenant in Malvern’s Artillery Volunteers. In 1897, he became the Justice of the Peace for Worcestershire County.

In 1908, Stanley Baldwin was chosen as the Conservative MP for Bewdley, a job that his father had held before him.
During the First World War, he worked as the Parliamentary Private Secretary for the leader of his party, Andrew Bonar Law. In 1917, he was named the Financial Secretary to the Treasury. In this job, he did a lot of work to find money to pay off the UK’s war debt.

In the 1920 Birthday Honors, he was made a member of the Privy Council, and a year later, as President of the Board of Trade, he was given a spot in the Cabinet.

Andrew Law became Prime Minister after the Conservative Party won the general elections in 1922. But within a year, he was told he had cancer that would kill him, so he quit. Lord Curzon and Stanley Baldwin were the two people who could take over for Law. King George V chose Baldwin.

Stanley Baldwin became Prime Minister for the first time in 1923. He called a general election to get people’s opinions and support for the government’s plans to lower unemployment by putting in place protective tariffs and trade protection. He couldn’t hold on to a majority, so Ramsay Macdonald’s first labor government took over.

Baldwin supported MacDonald’s government on a few issues over the next 10 months, but he voted against them when it came to the Russian treaties. Baldwin became Prime Minister again after the Conservatives won a huge majority in the 1924 general elections.

He put together a group led by Lord Weir to find a solution to the country’s electricity problem. The problem was fixed by making the Central Electricity Board, which increased output and the number of users while lowering the cost of generating electricity.

During his time in office, the government had to deal with the 1926 General Strike, which caused chaos in the UK. A year later, he made general strikes illegal bypassing the Trade Disputes Act.

The Labor party won the general elections in 1929, and Baldwin had to deal with a serious party crisis where people tried to get him to step down as party leader. In 1931, he went back to work for the government as a member of Ramsey’s National Coalition. When Ramsey resigned as PM in 1935, he became PM again.

In 1936, King Edward VIII said that he wanted to marry Wallis Simpson, who had already been married. This wasn’t okay with the royal family, so the king had to choose between getting rid of her or giving up the throne. In December 1936, he chose to step down. Baldwin was praised for how he handled this abdication crisis, and he became popular again.

George VI, King Edward VIII’s brother, took his place, and after George VI’s coronation, Baldwin said he was going to retire. The last thing he did was to raise the salaries of MPs and pay the leader of the opposition.

Stanley Baldwin’s time in politics was full of high points. People gave him credit for keeping the government running smoothly and peacefully during the 1926 General Strike and the following year when the government passed the 1927 Trades Disputes Act to limit the power unions’ interference.

The successful abdication of King Edward was the work that let him say a happy goodbye. Baldwin didn’t like Wallis Simpson at all, and the government didn’t trust her. But the king wanted to marry her anyway. Even the people wouldn’t have let a woman who had been divorced twice be their queen.

Baldwin saw how complicated the situation was and asked the king to choose the path that would restore the constitutional order and the people’s love for the king or step down from the throne. Baldwin’s reputation among the people went up after he made this bold and honest statement.

Stanley Baldwin was made Earl Baldwin of Bewdley and Viscount Corvedale, of Corvedale in the county of Shropshire, and a Knight of the Garter after he retired from politics (KG).

On December 14, 1947, he died in his sleep at Astley Hall in Worcestershire. His body was burned at the Golders Green Crematorium.