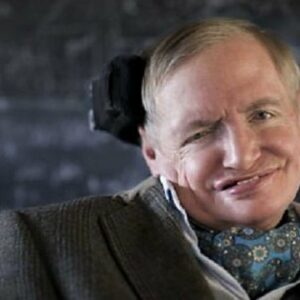 Stephen William Hawking was a theoretical physicist, cosmologist, author, and Director of Research at the University of Cambridge’s Centre for Theoretical Cosmology. His main research interests were in theoretical cosmology and the evolution of the cosmos as governed by general relativity rules. He is well-known for his work in black hole research. He was the first to propose a cosmology described by a combination of the general theory of relativity and quantum mechanics, with the theoretical prediction that black holes emit radiation, dubbed ‘Hawking radiation.’ Hawking suffered from Amyotrophic Lateral Sclerosis, a rare and life-threatening ailment that he had throughout his adult life. When he was 21, he was pursuing his PhD at Cambridge University when he became unwell. He was virtually fully paralyzed for the majority of his later life and communicated through a speech generating device. Hawking did not succumb to the disease’s hopelessness, instead devoting his entire life to his work and research. He was an Honorary Fellow of the Royal Society of Arts and the Lucasian Professor of Mathematics at the University of Cambridge for nearly three decades. He was appointed a Commander of the Order of the British Empire for his contributions to the study of the universe and his pioneering work in cosmology.

Stephen Hawking was born in Oxford, England, on January 8, 1942, to Frank and Isobel Hawking. His father worked as a researcher in the medical field. He came from a family of educated folks. His mother graduated from Oxford University as one of the first female students.

Hawking was born at a time when his family, as well as the entire country, was facing financial hardship due to the continuing World War II. He was the oldest of four siblings.
His father became the head of the National Institute of Medical Research’s Division of Parasitology and traveled to Africa to do research. Hawking looked more interested in astronomy than he was in becoming a doctor, which he desired.

He went to St. Albans School, but he was never particularly bright. He was more interested in what was going on outside of the classroom, and he spent his time and energy coming up with fresh ideas.
Later, he planned to major in mathematics despite his father’s desires, but because the subject was not taught at Oxford University at the time, he had to switch to physics and chemistry.

He continued to pay little attention to bookish matters, preferring to spend his time developing new approaches. He received honors in 1962 and moved on to the University of Cambridge to pursue a Ph.D. in cosmology.
Hawking began to exhibit unusual physical symptoms throughout his first year, such as tripping and falling and slurring his speech. He initially ignored the symptoms, but when his father became aware of them, he was referred to a doctor for a series of tests.

He was diagnosed with Amyotrophic Lateral Sclerosis (ALS), which meant that the section of his neurological system that controls muscular control was shutting down, which was a life-threatening illness.
Hawking began concentrating totally on his study work after this newfound understanding of death’s suddenness and the fact that he only had two years to live.

Hawking joined the Institute of Astronomy in Cambridge in 1968, and the discoveries of cosmologist Roger Penrose on the ‘Black Hole’ piqued his interest because he was working on the phenomenon that caused the Universe to begin in the first place.

Hawking’s ‘Second Law of Black Hole Dynamics’ was discovered in 1970. According to it, a black hole’s event horizon can never shrink. He proposed the four laws of ‘Black Hole Mechanics’ with James M. Bardeen and Brandon Carter.
Hawking went to Moscow in 1973, and his conversations with Yakov Borisovich Zel’dovich and Alexei Starobinsky helped him come up with the concept of ‘Hawking Radiation.’ He was made a ‘Fellow of the Royal Society’ the following year.

Through his print and television interviews, he began to get more recognition for his research and discoveries, and in 1975, he was awarded the Eddington Medal and the Pius XI Gold Medal, followed by the Dannie Heineman Prize and the Maxwell Prize.

In 1977, Hawking was recruited as a professor with a chair in gravitational physics at the University of Oxford, where he also earned the Albert Einstein Medal and an honorary doctorate.

He eventually lost control of his speech, making it more difficult to hear him, yet this did not prevent him from being appointed Lucasian Professor of Mathematics at Cambridge University in 1979.
Hawking and Gary Gibbons hosted a Nuffield Workshop at Cambridge University in 1982 on the theme of “The Very Early Universe,” which focused mostly on the cosmic inflation theory.

He and Jim Hartle published a model called the ‘Hartle-Hawking state,’ which claimed that time did not exist before the Big Bang and that the concept of the universe’s beginning was meaningless.
After a tracheotomy in 1985, he lost his voice. As a result, he required round-the-clock care. His plight drew the attention of a computer programmer in California, who developed a speech program that could be controlled by head or eye movement. With the release of ‘A Brief History of Time’ in 1988, Hawking rose to international fame for the first time. It was intended to be a simplified version of cosmology for the general public, and it quickly became a best-seller.

In 1993, he co-edited a book on Euclidean quantum gravity with Gary Gibbons and released ‘The Nature of Space and Time,’ a collection of his own essays on black holes and a series of lectures.

‘Black Holes and Baby Universes and Other Articles,’ a well-known collection of essays, interviews, and talks, was released in 1993. ‘Stephen Hawking’s Universe,’ a six-part television series, and a companion book followed.

Due to University laws and regulations, Hawking stepped down as Lucasian Professor of Mathematics in 2009. He continued to work in the Department of Applied Mathematics and Theoretical Physics as a director of research.

Hawking’s main area of study was theoretical cosmology, with a focus on the evolution of the universe as guided by general relativity rules. The study of ‘Black Holes’ is thought to be his most important work.

In 1982, Hawking was made a ‘Commander of the Order of the British Empire.’ Many major prizes were later bestowed upon him, including “the Gold Medal of the Royal Astronomical Society,” “the Paul Dirac Medal,” and others. ‘The Wolf Prize,’ ‘Companion of Honor by Her Highness,’ ‘Julius Edgar Lilienfeld Prize,’ ‘the Copley Medal,’ ‘the Presidential Medal of Freedom,’ ‘the Russian Fundamental Physics Prize,’ and so on have all been given to Hawking.’

He met his first wife, Jane Wilde, a sister’s acquaintance, soon before his condition was diagnosed. In 1965, the couple married. Robert, Lucy, and Timothy were their three children. Jane was Hawking’s rock of strength in the beginning of their marriage, but as his physical condition deteriorated and his global fame grew, their marriage became a major burden for Jane, and tension began to brew in their relationship.

Hawking had a love relationship with one of his caregivers, Elaine Manson, and left Jane for her in the late 1980s. In 1995, he divorced Jane and married Manson. Hawking’s family life suffered as a result of their marriage, and he spent much of his time away from his children. Elaine was accused of physically abusing him, but Hawking denied it.

In 2006, he divorced Elaine Manson.
Hawking’s health began to deteriorate as time went on. He couldn’t drive his wheelchair any longer, needed a ventilator on occasion, and had been hospitalized multiple times since 2009. He was collaborating with scientists on devices that could convert his brain patterns into switch activations.
Stephen Hawking died peacefully on March 14, 2018, at the age of 76, in his home in Cambridge, England.

Jane, Stephen’s first wife, penned a number of novels, including ‘Travelling to Infinity’ and ‘My Life with Stephen.’ Jane had a romantic involvement with organist Jonathan Hellyer Jones while performing in a church choir in 1977, but Hawking did not protest, claiming that as long as she liked him, he had no problems with their platonic relationship.

He had an appearance on the popular American sitcom ‘The Big Bang Theory.’
Hawking believed that human life was in danger, and that “a sudden nuclear war, a genetically created virus, or other hazards we haven’t yet considered” may wipe us off the face of the world.