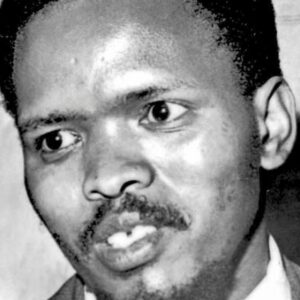 Bantu Stephen Biko was a South African philosopher and anti-apartheid activist who was the driving force behind the Black Consciousness Movement, which swept across Africa in the 1960s and 1970s. His thoughts on the state of black people during colonialism, as well as his overall outlook on life, were compiled in a series of writings under the pen name ‘Frank Talk.’ He is regarded as one of the most influential historical African individuals, inspiring students across the country to join anti-racism campaigns and fight for their rights. He felt the waves of racism affecting black, coloured, and Indian pupils while at Lovedale School, which inspired him to form the South African Students Organization. In 1973, he was barred from giving public statements as a result of the country’s anti-apartheid laws, but Biko continued his fight. After the South African government went all out against the Black Consciousness activists, he was finally jailed in 1976. On September 12, 1977, he was beaten to death. His funeral was a huge event, with delegations from all across Europe and the United States in attendance.

Bantu Stephen Biko was born on December 18, 1946, in a destitute South African family to Mzingaye and Alice Biko. His father worked as a police officer before becoming a clerk, while his mother worked as a white servant. Everything was fine until young Bantu’s father died of illness when he was four years old.

His mother was tasked with caring for the family, and she did everything she could to ensure the survival of all four of her children.

Bantu was known at school for being an extremely curious kid who had an insatiable need to learn more about the topics that piqued his attention.

He was soon accepted into Lovedale, a prominent boarding school where his brother Khaya was also a student. The brothers were then accused of backing the Pan-Africanist Congress, an armed nationalist group that had been banned by the South African government.

Khaya and Steve have been kicked out of Lovedale. Steve went on to study medicine at St. Francis College, where he formed the majority of his political affiliations.

Steve began to reject the colonial white South African administration at St. Francis, and joined rallies calling for a government that was more in tune with the black community, who made up the bulk of the country’s population.

As soon as he graduated from high school, Steve Biko enrolled at the University of Natal to study medicine. At university, he was subjected to racial prejudice based on skin color, as well as a hazardous level of white supremacy.

The National Union for South African Students was founded in 1966 in response to the need for a separate organization for “colored” students. Steve became a member in 1966.

Steve co-founded the South African Students’ Organization in 1968, and anti-apartheid became their principal mission, a government policy that discreetly prioritized white skinned people over others. SASO claimed equal rights for black, coloured, and Indian students, and as a result, SASO helped the Black Consciousness movement gain a lot of traction.

Steve rose to the top of the organization and became its president in just one year. SASO went all out once the new president was named, with speeches and movements that shocked South Africa’s anti-apartheid instincts to their core. His influence was breaking limits and it reached a point when the University of Natal had to remove him in 1972.

Steve made his ambitions apparent the following year when he founded and became the leader of a new organisation called the Black People’s Convention. Throughout the 1970s, the group grew in size and prominence, eventually emerging as the only hope for black people to reclaim their civil rights.

The government imposed a ban on Steve in 1973. He was not allowed to speak in public, give interviews, or write columns, among other things, according to the prohibition.

SASO’s operations were temporarily halted as a result of the ban, before the group resurfaced in the mid-1970s and their leaders began operating underground. Steve launched the Zimele Faith to assist the family welfare of

political activists, which increased black people’s trust in him and his influence rose.
Steve was detained multiple times on grounds of being anti-national due to his growing popularity, which caused a headache for the South African government. Steve was arrested for the final time in August 1977 and detained in Port Elizabeth.

In August of 1977, Steve was arrested. Steve was found brutally beaten and naked in Pretoria, South Africa, a month later, hundreds of kilometers from where he was allegedly held captive.

He died the next day, on September 12th, of a brain bleed as a result of a brutal police beating he received in prison. The news of his killing spread like wildfire, igniting a series of riots that rocked the South African government to its core.

The officers accused of beating Steve were never charged, and 20 years later, the same officers admitted to killing him. Steve had accomplished everything that needed to be accomplished before his death, and he became an anti-apartheid icon for South Africa.

Steve Biko was regarded as a tall, well-built, and attractive man, and girls adored him. Biko, his companions, and other activists refused to indulge in luxury, claiming that most of their black brothers and sisters lacked even the most basic necessities of existence, and that there was no morality in living a lavish lifestyle.

He was popular with both white and black girls and was frequently referred to as a womanizer, but after marrying Ntsiki Mashalaba in December 1970, he settled down and the couple had two daughters. Steve’s extramarital escapades were known to Ntsiki, and she had already filed for divorce before he died in 1977.