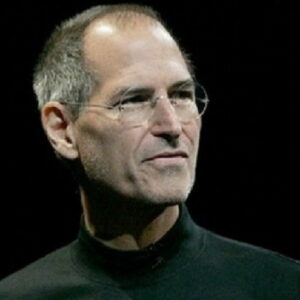 Steve Jobs is an American entrepreneur, investor, and co-founder of Apple Inc. who is recognized as the “Father of the Digital World.” He was not one to rest on his laurels, and with his entry into the music and cellular industries, he made history in the world of consumer electronics. Jobs, the founder of Apple Inc., Pixar Animation Studios, and NeXT Inc., breathed life into the information technology industry. He was a master of innovation, with a perfectionist approach and a futuristic outlook. He predicted a trend in information technology and pushed hard to incorporate it into his product range. Steve Jobs revolutionized his sector with his original ideas and distinctive concepts, which he protected with 346 US patents. He oversaw the creation of the iMac, iTunes, iPod, iPhone, and iPad during his time at Apple. He was the brains behind the company’s Apple Retail Stores, iTunes Store, and App Store operations. Despite having so much to fall back on, it’s fascinating to learn that this great pioneer was not well educated, having dropped out of college.

Steve Paul Jobs, the adoptive son of Paul Reinhold and Clara Jobs, was born on February 24, 1955. Abdulfattah ‘John’ Jandali and Joanne Carole Schieble, Steve’s biological parents, were unable to raise him because their parents disapproved of their relationship.
Jobs has been exposed to the realm of mechanics since he was a child. In the home garage, he would spend long hours with his father disassembling and rebuilding electronic gear. These events imbued the little kid with perseverance and mechanical prowess.
Academically, he enrolled at Reed College after graduating from high school in 1972, but dropped out after six months to pursue creative programs, including a calligraphy course.

In 1973, he began his professional career as a technician at Atari, Inc. in Los Gatos, California.
Jobs traveled to India in mid-1974 in search of spiritual enlightenment with Neem Karoli Baba. Before Jobs could see Neem Karoli Baba, the Baba died, and Jobs returned to Atari for a seven-month absence to design a circuit board for the arcade video game Breakout.
He and Wozniak collaborated on a circuit board that eliminated around 50 chips from the system, allowing it to be more compact. The creation of the digital ‘blue box,’ which enabled free long-distance calls, came next. The blue box’s good answer inspired in him the desire to succeed in the electronics industry.
He co-founded Apple Computer Company with Steve Wozniak in 1976. The company’s first focus was on selling circuit boards. Wozniak created the Apple I computer the same year.
Jobs resigned from his own formed firm in 1985 due to a disagreement with the company’s CEO, John Sculley. He created NeXT Inc. the same year. The firm was known for its technological prowess, particularly its object-oriented software development system.
In 1986, he purchased Lucasfilm’s computer graphics division’s Graphics Group (later becoming Pixar). The first animated picture to be released after the acquisition was ‘Toy Story.’
When Apple acquired NeXT Inc in 1996, he returned to his co-founded firm as a de facto chief executive and was legally named interim chief executive.
A lot of projects were discontinued during his leadership. He launched a whole new line of products, causing the company’s sales to skyrocket, transforming it into one of the world’s electronic behemoths.
The Apple iMac was first introduced to the world in 1998. His return to Apple was the catalyst for it. In the following year, the iMac underwent a makeover, and the world was exposed to the Graphite grey Apple iMac. Since then, the iMac has gone through a number of transformations.

In the year 2000, he was named Apple’s permanent CEO, and he went by the moniker iCEO. The company quickly branched out, bringing about new digital appliances, and history was being made.
With the debut of the iPod, iTunes digital music software, and iTunes Store in 2001, the firm ventured into the realm of music. The item was an instant hit, boosting the company’s sales and reputation by leaps and bounds. The first generation of iPod was replaced by the iPod classic, iPod Nano, iPod Touch, and iPod shuffle, which were all designed with the consumer in mind.
With Disney’s purchase of Pixar in 2005, he became the company’s largest stakeholder, owning nearly 7% of the company’s equity. He was a member of the company’s board of directors.
With the advent of the iPhone in 2007, he entered the cellular phone market, and the rest, as they say, is history. With its multi-touch touchscreen, built-in mobile browser, and iPod, the iPhone changed the way people thought about mobile phones.
In the years that followed, he experimented with the iPhone to create improvised versions. The iPhone 3G was released in 2008 with three major features: GPS, 3G data, and tri-band UMTS/HSDPA; the iPhone 3GS was released in 2009.
In 2010, he introduced the iPhone 4, a slimmer model than its predecessors with increased capabilities such as a five-megapixel camera and a secondary front-facing camera with 4G capability.
In 2011, Apple debuted the iPhone 4S, which contained Siri, a voice-activated virtual assistant. He resigned as CEO of Apple in the same year, but remained chairman of the company’s board of directors.

With the release of the first generation iPhone, he caused a stir in the cellular device sector. The smartphone was the first of its kind, with multimedia features and a quad-band touchscreen. Times Magazine named it the “Invention of the Year” in 2007.

Several prizes were bestowed to him during his lifetime, including the National Medal of Technology and the Jefferson Award for Public Service. In 2007, he was inducted into the California Hall of Fame. In the same year, Fortune magazine ranked him the most powerful person in business. Fortune magazine honored him CEO of the Decade in 2009. He was placed No. 17 on Forbes’ list of the World’s Most Powerful People the following year.
The Financial Times honored him Person of the Year in 2010.

In 1978, he and his love partner Chrisann Brennan had a daughter, Lisa Brennan Jobs. Though he initially denied being the girl’s father, he subsequently admitted that Lisa was his child.
Laurene Powell and he married on March 18, 1991. Reed, the couple’s son, and Erin and Eve, their two daughters, were the couple’s three children. He was diagnosed with pancreatic cancer in 2003. On October 5, 2011, he died of the condition. Two days later, a funeral was held. He was laid to rest in an unmarked grave at Palo Alto’s Alta Mesa Memorial Park, the city’s only non-denominational cemetery.
Jerry Brown, the governor of California, designated October 16 to be ‘Steve Jobs Day.’ In December 2011, a bronze statue of him was unveiled at the Graphisoft Company in Budapest. He was honored as a Disney legend and received the Grammy Trustee Award after his death. Forune magazine even labeled him the “best entrepreneur of our time.”