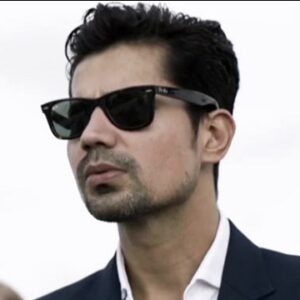 Sumeet Vyas is a theatre artist, Bollywood actor, and writer who rose to stardom thanks to The Viral Fever’s web series ‘Permanent Roommates.’ His portrayal as Mikesh in the series was well-received, and he became a familiar figure. Following the success of the show, Vyas began receiving similar roles in other shows, but the ambitious young actor refuses to be categorized and desires to take on a variety of roles. He’s primarily a stage performer, but he’s also acted in a few television shows and even directed a few films! He hasn’t forgotten the years of difficulty he went through to get to where he is now, despite being surrounded by so much adulation and admiration. He remains humble and down-to-earth, which makes him even more appealing to his many supporters not just in India, but all across the world.

Sumeet Vyas is a theatre enthusiast who enjoys working as a performer. He has had powerful supporting roles in a few Bollywood films, although he likes to identify to himself as a theatre performer. Vyas was not enthusiastic on performing in the beginning of his career. He was hired as an apprentice in an editing studio after his father recommended him. Later in life, he worked as an editor, editing a number of television episodes, including ‘Rishtey.’ Vyas was so taken aback by his father’s play, Yahudi Ki Ladki, that he quit his editing job and relocated to Mumbai to pursue an acting and writing career.

In the year 2000, Vyas made his acting debut in a theater production. He did a play for Nadira Zaheer Babbar’s theatre troupe, ‘Ekjute,’ when he was 17 years old. He stayed with the company for a year, and he had no job on many occasions, forcing him to stay backstage or appear as a proxy actor, stepping in for other actors who were unable to attend rehearsals. He even learned dholak and performed for the troupe in order to become more valuable. He began acting in, composing, and directing plays once Lady Luck shined on him.

Vyas made his acting debut in Chander Bhel’s Doordarshan serial “Woh Hue Na Hamare” in 2002. He was paid roughly Rs 40,000 per month as a 20-year-old teenager. In 2009, he appeared in the hit television serial “Rehna Hai Teri Palkon Ki Chhaon Mein.” Vyas did his first commercial in 2007, directed by Soojit Sircar, after multiple rejections as a model. He went on to create a slew of other commercials.

Vyas rose to prominence in the online series ‘Permanent Roommates’ in 2014, playing Mikesh. The online series ‘Permanent Roommates,’ about a couple in a live-in relationship, was one of India’s most popular. The first season focused on the couple’s struggles to get to know one another after a three-year long-distance romance, while the second season focused on their families and pregnancy.

It’s fascinating to learn about Vyas’s beginnings with web series. Vyas was so taken with the content of The Viral Fever (TVF) that he wrote to Arunabh Kumar, the creator of TVF, and expressed his desire to appear in one of the videos. The actor, who was only doing minor roles in films and television programs at the time, had no idea he would be summoned for an audition and cast in the series! In 2012, Sumeet co-starred with Sridevi in the film “English Vinglish.” In addition, he has starred in Mahesh Bhatt’s films ‘Jashn,’ ‘Guddu Ki Gun,’ ‘Aurangzeb,’ and ‘Sabki Bajegi Band.’

Sumeet writes and directs short films in addition to appearing in them. He collaborated on short films with Anand Tiwari, well known for his role in ‘Detective Byomkesh Bakshi.’ When a buddy from Yash Raj Films saw a script for one of these short films, he gave Vyas the opportunity to work as a principal writer on the ‘Bang Baaja Baarat’ series. The online series tells the story of a couple who met on a dating app and decided to marry.
“My earlier employment experiences taught me that if I work hard, it will lead me to better things,” Vyas said in an interview. He’s decided to continue focusing on the digital platform for a while longer, as the demand for short films and web series grows. In the digital realm, he is now a well-known figure. Vyas is hesitant to return to TV unless he is provided distinctive roles that would not bore him or the audience.

Sumeet Vyas was born in the Indian state of Rajasthan on July 27, 1983. B M Vyas, a playwright who graduated from the National School of Drama, is his father, and Sudhu Vyas is his mother. Shruti, Vyas’ younger sister, is married to Namit Das, an actor. For economical reasons, his father had to give up acting and turn to scriptwriting. ‘Discovery of India,’ ‘Chandragupta Maurya,’ and ‘Maharana Pratap’ were among the shows for which he wrote scripts.
Jodhpur was Sumeet’s home for much of his childhood. He was never particularly bright in school, and after failing his 12th board examinations, he dropped out and began hunting for work. He got a job as an apprentice in an editing studio at that point. He is married to Shivani Tanksale, a Mumbai-based theatrical performer who has appeared in several Bollywood films and is a well-known figure in the advertising business.

Sumeet is one of the wealthiest actors and one of the most popular. Sumeet Vyas’ net worth is estimated to be $1.5 million, according to Wikipedia, Forbes, and Business Insider.