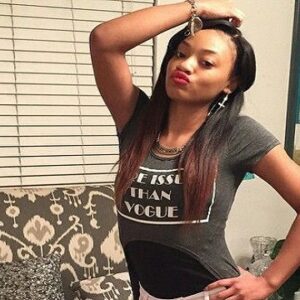 Sunjai Williams is an American dancer and reality television personality best known for her role in the dance reality show “Bring It!” on the Lifetime Network, which was the most watched Friday program in five years. The show is based on Dianna “Miss D” Williams’ competitive dance company, The Dancing Dolls, which is based in Jackson. Sunjai has been a member of the dancing group for a few years and was a guest star on the show’s first two seasons. She has traveled around the country with the cast and crew of the program, attending meet and greet events in cities like Connecticut, Brookhaven, and Pittsburgh, where she hosted Q&A sessions and gave motivating talks to her young fans. She’s also performed for a number of famous people. Her success on the show aided her in obtaining a scholarship to DeSales University in Center Valley, Pennsylvania. Sunjai secured a contract with Tonner-One World in July 2016 to create “The Sunjai Doll,” a fashion doll in her likeness, as a prominent protagonist in their “Prettie Girls!” doll line in 2017.

Despite the fact that the show has been a success for four seasons, Sunjai herself quit after the second season to pursue her college degree. Her social media fame has risen since her involvement on the reality TV show. Her Instagram account has a sizable following.

Sunjai Williams, who was born to a dancer mother, began dancing at the age of five. Soon after, she became the youngest member of The Jackson Stepperettes, a dancing troupe. After her coach retired, she left the group and moved on to dance for another group, The Show Stoppers of Jackson, MS. She was a member of The Show Stoppers’ All Stars squad, which was developed by bringing together some of the best dancers from various dance organizations. She became the captain of the new girls after joining The Dancing Dolls. She also swiftly adjusted to her new group’s aggressive style, earning a seat on the team’s prestigious fighting squad.

Sunjai used her newfound celebrity to secure a full dance scholarship to DeSales University after starring on the dance reality show ‘Bring It!’ Pilgrim Studios, the show’s creators, organized an audition for her, and she won the scholarship. Sunjai, who has been doing majorette and hip-hop dance since she was a toddler, was introduced to new Northern dance genres such as ballet and modern.

She fell in love with modern dance right away, but found learning the terms and techniques for ballet to be difficult. She did, however, enroll in beginner dancing classes to familiarize herself with the fast-paced dance style. Her majorette routines delighted her friends, and she learnt the Latin-inspired music of Jersey Club from them. She also did a special number at the UniverSoul Circus in Philadelphia, displaying the contrast of Northern and Southern dancing styles.

Sunjai Williams was born in Jackson, Mississippi, on February 9, 1997. Selena Johnson, her mother, is a dancer and reality TV star, and her father, James J.J. Williams, is a successful businessman. Quincy, her older brother, was born to her mother when she was 14 years old. Her mother spends time promoting awareness about teen pregnancy in addition to performing on the dance reality show. At the age of 20, she married James. Sunjai is the oldest of her parents’ three children, and she has two younger sisters, Shamia “Sky” Jai Williams and Shania “Star” Jai Williams.

Her two younger sisters have followed in her footsteps in pursuing a career in dance. They were members of the dancing group The Dancing Dolls and were frequent cast members on the show ‘Bring It!’ Despite the fact that her parents eventually separated, they remained friends and raised their children together. Her father, James, is a family man who claims to be her daughters’ biggest admirer. Sunjai graduated from Clinton High School with honors.

Sunjai is one of the wealthiest dancers and one of the most popular. Sunjai Williams net worth is estimated to be $1.5 million, according to Wikipedia, Forbes, and Business Insider.