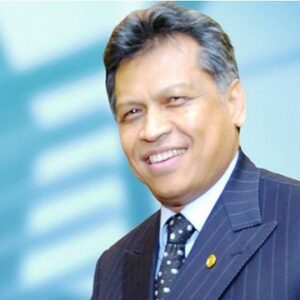 Surin Pitsuwan was a Thai diplomat and politician. He was one of the most well-known and highly regarded Thai voices. Born in the southern Thai region of Nakhon Si Thammarat, he spent a year in the U.S. as a high school exchange student before earning his master’s degree and Ph.D. at Harvard University. Before entering politics, he taught political science for a time in his native country. From his hometown, he rose to become a member of parliament and then the Thai government’s Deputy Minister of Foreign Affairs. He was eventually promoted to the position of Minister of Foreign Affairs. Later, as Chairman of the ASEAN Regional Forum (ARF), he committed himself to encourage greater unity throughout Southeast Asia. In addition, he was a member of other international commissions, including the UN Commission on Human Security, the Commission on the Social Dimension of Globalization, and the International Advisory Board of the International Crisis Group. As an exceptional political leader and member of numerous international forums, he advocated for democracy and human rights. He made major contributions to the prosperity of Southeast Asia and the international society.

Surin Pitsuwan was born in Nakhon Si Thammarat, Thailand, on October 28, 1949, to an integrated Thai family of Malay heritage.
He obtained his initial Islamic instruction from his renowned ulama grandfather, Hj. Yakoob bin Abdul Rauf. Later, he completed his elementary and senior studies at a local school in his hometown.

In 1967–68, he received an American Field Service (AFS) exchange scholarship and spent a year in the United States as a high school exchange student.
Then he attended Thammasat University in Bangkok and graduated from Claremont McKenna College in California in 1972 with a Bachelor of Arts in Political Science.

With assistance from the Rockefeller Foundation, he attended Harvard University, United States of America, where he got his master’s degree in 1974.

He studied Arabic and did his study at the American University in Cairo from 1975 to 1977. In addition, he was a fellow at the Higher Institute for Islamic Research in Cairo.
Harvard University, United States, granted him a doctorate in Political Science and Middle Eastern Studies in 1982.

From 1978 until 1983, he was a professor at Thammasat University’s Faculty of Political Science.
Between 1983 and 1984, he was appointed a Congressional Fellow by the American Political Science Association (APSA).

He gained first-hand knowledge of the American legislative process through his work for the Senate Republican Conference. In addition, he taught Southeast Asian Affairs at American University in Washington, D.C.
He returned to Thailand in 1984 and resumed his career as a professor at Thammasat University.

In 1986, he ran for a parliamentary seat in his native province of Nakhon Si Thammarat and was elected by the Democrat Party.
He was named Secretary to the Speaker of the House of Representatives in 1986. He served as the assistant to the Deputy Minister of the Interior from 1989 to 1992.

Surin Pitsuwan presided over the ASEAN Ministerial Meeting and the ASEAN Regional Forum in 1999 and 2000. (ARF).
He served as a member of the Commission on Human Security from 2001 to 2003, and then as a consultant to the UNDP Human Development Report Project from 2003 to 2004.

He sat on the Board of the Centre for Humanitarian Dialogue, a private diplomacy group whose aim is to avert armed violence via mediation and dialogue, from October 2013 until his death.

As the chairman of ASEAN, Surin Pitsuwan exerted tremendous effort, with the support of the United Nations, to assist Southeast Asian states in restoring law and order. His efforts contributed to the restoration of peace and security in East Timor.

Surin Pitsuwan wed Khun Alissa, and they had three children together.
On November 30, 2017, he died of a heart attack at the age of 68. He fell while prepared to speak at the Thailand Halal Assembly 2017 in Bang Na, Bangkok, at the BITEC (Bangkok International Trade and Exhibition Centre).

Surin is one of the wealthiest and most popular politicians in the world. According to our research, Wikipedia, Forbes, and Business Insider, Surin Pitsuwan has an estimated net worth of $1.5 million.