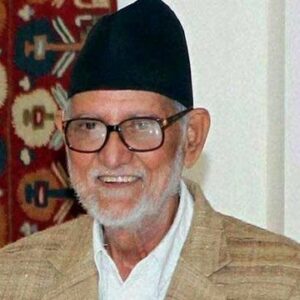 Sushil Koirala was a former Prime Minister of Nepal and a Nepalese politician. From February 2014 to October 2015, he served as Prime Minister. Girija Prasad Kirala, Matrika Prasad Koirala, and Bishweshwar Prasad Koirala were his relatives who served as Prime Minister of Nepal. Sushil Koirala has been active in Nepalese politics since 1954, as a scion of Nepal’s most illustrious Koirala family, who are known for their years of service in the country’s political and socioeconomic sectors. He spent sixteen years in exile after the royal coup in 1960. During his exile, he lived in India and edited the newspaper of his political organization, ‘Tarun.’ Due to his role in the 1973 airline hijacking, he spent three years in Indian prisons. He held a number of important roles in the ‘Nepali Congress’ party, including General Secretary, Vice President, and lastly President, which he maintained until his death in February 2016.

He was born to Bodh Prasad Koirala and Kuminidi Koirala on August 12, 1939 in Biratnagar, Nepal, as one of their six boys among nine children.
He was a Nepalese descendent of the legendary Koirala family. At various times, three of his cousins, Girija Prasad Koirala, Bishweshwar Prasad Koirala, and Matrika Prasad Koirala, served as Prime Minister of Nepal.
Sushil Koirala has long claimed to have had an informal education, but one of his sisters-in-law has confirmed that he got his I.Com at a college in India.

He was inspired to enter politics in his teens in 1954 by the ‘Nepali Congress’s social and democratic beliefs. All three of his cousins, Girija Prasad Koirala, Bishweshwar Prasad Koirala, and Matrika Prasad Koirala, remained members of the ‘Nepali Congress’ party, where they held important positions.
He became actively involved in the party’s goal of holding democratic elections in Nepal after joining the party. In 1959, Nepal had its first democratic election, with his relative Bishweshwar Prasad Koirala becoming Prime Minister.
In December 1960, however, King Mahendra staged a coup and ousted Bishweshwar Prasad Koirala. Several members of the ‘Nepali Congress,’ including Sushil Koirala, were exiled from India as a result of this incident.
During the 1960s and 1970s, he became actively involved in the King’s government’s resistance effort. He began publishing the party’s monthly, ‘Tarun,’ in Varanasi, during his sixteen-year exile in India.
He was involved in the hijacking of a plane bound for India from Nepal in 1973. Despite the fact that the operation raised funding for the ‘Nepali Congress,’ Sushil Koirala was arrested and spent three years in Indian jails.
In 1979, he returned to Nepal and continued his efforts to establish a democratic government, which culminated in a 1990 deal with the governing monarchy. Legislative elections were held in 1991.
He was accepted into the ‘Nepali Congress’ as a member of the ‘Central Working Committee,’ and climbed through the ranks of the party. He was named the party’s General Secretary in 1996, and after two years, he was promoted to Vice President.
In 2008, his cousin, Girija Prasad Koirala, the party’s then-President, appointed him as acting President of the ‘Nepali Congress.’
Following Girija Prasad Koirala’s death in 2010, the ‘Nepali Congress’ party’s ’12th general convention’ elected him as President, a position he held until his death. Under the leadership of Sushil Koirala, the ‘Nepali Congress’ party rose to prominence and won the most seats in the 2013 Constituent Assembly elections.
He defeated former Prime Minister Sher Bahadur Deuba to become the new leader of the Nepali Congress Parliamentary party and was nominated as Prime Minister on February 10, 2014, with 105 votes out of 194. The Nepali Congress Parliamentary Party and the ‘Communist Party of Nepal’ achieved an agreement, and he was appointed Prime Minister.
His government, on the other hand, was heavily chastised on a number of fronts. His government’s poor response to the families of sixteen Sherpas killed in an avalanche on Mount Everest in April 2014 was widely criticized. This was exacerbated by the government’s lackluster response following the deaths of dozens of hikers in a snowfall in the Annapurna region in October of that year, leaving hundreds stranded.
His government came under fire once more as it attempted to deal with the devastating earthquake that struck Nepal on April 25, 2015, the country’s worst natural disaster in decades. Nepal’s military forces were activated, and the government requested international support in its rescue, relief, and rehabilitation efforts.
In September 2015, Nepal adopted a new constitution that was agreed upon by the country’s four major political parties. Following the adoption of the new constitution, Sushil Koirala was forced to resign as Prime Minister on October 10, 2015, to make room for Khadga Prasad Sharma Oli of the ‘Communist Party of Nepal.’ The assembly elected the latter as Nepal’s next Prime Minister.

Throughout his life, he was never married and was never known to be in a relationship with a woman. He lived a humble life and maintained a consistent public image throughout his political career.
There was no property in Sushil Koirala’s name, according to the Nepal government’s official website. His three cellphones were declared to be his assets by him.
‘Sushil daa’ was his nickname.
Sushil Koiala was a habitual smoker who had tongue cancer in 2006 and was diagnosed with lung cancer in June 2014. On February 10, 2016, he died of pneumonia in Kathmandu, Nepal’s capital city.