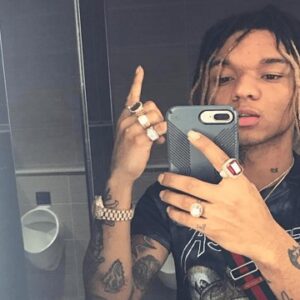 Swae Lee (born Khalif Malikibnsham Brown) is a Mississippi-based rapper, singer, songwriter, and record producer. He is best known for performing with his real-life brother Slim Jxmmi as one half of the hip-hop duo Rae Sremmurd. The platinum hits ‘No Type’ and ‘No Flex Zone’ made this pair renowned. Lee, who has had great ambitions since boyhood, began his search for fame on YouTube. His talent, love, and dedication to music helped him get notice from the music industry, and the young vocalist was able to achieve worldwide reputation in a short period of time. Lee is now one of the most well-known rappers in the United States. Aside from his name and celebrity, the American rapper and musician has millions of followers all around the world. Lee has over 1.7 million Instagram followers and 304k Twitter followers, according to his social media profiles. On their joint Instagram account, he and his brother have over 3.8 million followers.

Swae Lee and his brother Jxmmi used to perform at parties and gigs in their hometown before entering the rap industry. The two formed the group ‘Dem Outta State Boyz’ with the help of a friend. With the goal of gaining exposure, this band began uploading its music and videos to YouTube.

Lee and Jxmmi moved to Atlanta after being advised by P-Nasty to do so after performing in the group. There, the group teamed up with record producer Mike WiLL Made-It and signed to his label EarDrummers Entertainment as Rae Sremmurd (spelled backwards as Ear Drummers), producing two songs titled “We” and “I Dip.” Unfortunately, these songs did not receive much notice from the general audience.

Lee and his brother didn’t give up hope, and in 2014, they released a single called ‘No Flex Zone.’ The pair rose to fame shortly after the publication of this song! This song reached #35 on the Billboard Hot 100 in the United States, and it has spawned a slew of remixes. Following that, Lee and Jxmmi released the single ‘No Type,’ which charted at #16. Under the label EarDrummers, the brothers have now released two studio albums, ‘SremmLife’ and ‘SremmLife 2’. Swae Lee said in 2016 that his debut solo album, ‘Swaecation,’ would be released shortly.

Swae Lee was born Khalif Malikibnsham Brown in Inglewood, California on June 7, 1993. His family moved to Tupelo, Mississippi, when he was young, and he and his brother Slim Jxmmi alias Aaquil Ibinshaman grew up in one of the city’s most dangerous and crime-ridden neighborhoods. Lee’s parents soon divorced, which aggravated their situation. The brothers then began looking for a place to stay in abandoned houses.

Despite the fact that Lee and Jxmmi have endured adversity throughout their lives, their love for music has never waned. They quickly gained notoriety and reached the ranks of the most popular rappers in the present American music industry as a result of their hard work and dedication.
Swae Lee made news in the past for driving without a license.

His talent, love, and dedication to music helped him get notice from the music industry, and the young vocalist was able to achieve worldwide reputation in a short period of time. Swae Lee’s net worth is $9 million as of 2022.