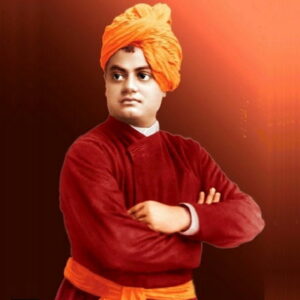 Swami Vivekananda was an Indian Hindu monk and the foremost follower of the 19th-century Indian mystic Sri Ramakrishna Paramahansa. Vivekananda was instrumental in reviving Hinduism in India and elevating it to a significant world religion. He was the solitary person who introduced the Indian concepts of ‘Vedanta’ and ‘Yoga’ to the Western world. Vivekananda was born into an aristocratic Bengali family and early in his life championed the path of spirituality. He was captivated by ascetics from a young age and began practicing meditation. However, life would not have been the same for this spiritual genius if he hadn’t met Sri Ramakrishna, his guru and guide. Vivekananda was inspired by and supported by Ramakrishna in his spiritual quest. Ramakrishna assisted him in channeling his intellect and willpower, so quenching his spiritual thirst. The two formed an incredible bond that would go down in history as one of the most unusual teacher-disciple partnerships ever. Vivekananda preached the ‘Vedanta’ philosophy to people all over the world for the majority of his life. He became a’sanyasi’ (ascetic) at the young age of 25 and has dedicated his life to the improvement of mankind since then. He emphasized the significance of secular and spiritual education as the sole way to enrich one’s life, according to him.

Swami Vivekananda was born Narendranath Datta to Vishwanath Datta and Bhubaneswari Devi on January 12, 1863, in Calcutta, Bengal Presidency, British India. His father worked as an attorney, and his mother worked as a homemaker.

Narendra, as he was affectionately known, was strongly influenced by his parents, who molded his personality and thought process. Narendra had a deep interest in spirituality since he was a child, and he used to meditate in front of Hindu deities’ representations.

He received his primary education at ‘Ishwar Chandra Vidyasagar’s Metropolitan Institution’ before graduating from ‘Presidency College,’ Calcutta, with a bachelor’s degree in arts.

Narendra had not only studied Western logic and philosophy by the time he graduated in 1884, but he was also well-versed in Hindu scriptures, thanks to his voracious thirst for knowledge.

He became a spiritual apprentice after graduating from college. The principles of the ‘Brahmo Samaj,’ which condemned idolatry and predicted the arrival of a formless God, shaped his beliefs.

At 1881, Narendra met Ramakrishna in Dakshineswar, where he was staying. Narendra was in the midst of a spiritual crisis at the moment. “Have you seen God?” he famously asked Sri Ramakrishna, and it changed his life forever.

Despite the fact that Ramakrishna did not totally persuade Narendra during their first meeting, the latter was overwhelmed by the former’s selfless, unconditional love. He eventually became a regular visitor to Ramakrishna.

Meanwhile, Narendra became closer to Ramakrishna after the untimely loss of his father, Vishwanath Datta. By this time, Ramakrishna had persuaded Narendra by answering his spiritual inquiries to the point where he was willing to give up everything in order to realize God.

After being diagnosed with throat cancer in 1885, Ramakrishna moved to a garden home in Cossipore. Narendra and his classmates took excellent care of their master, nursing him with the utmost dedication and love.

Before renouncing his body, Ramakrishna appointed Narendra as the head of a new monastic order dedicated to the service of humanity.

Narendra and his youthful students moved to Baranagar after Ramakrishna’s death. They took the ceremonial vows of’sannyasa’ in 1887, giving themselves new names. Narendra became known as Swami Vivekananda after a period of time.

Swami Vivekananda decided to embark on a journey in 1888 to spread Ramakrishna’s teachings throughout the world. During the first years of his voyage, he extensively explored India. He walked everywhere, ate alms, and lived the life of a traveling monk.

During his investigation of the country, he was exposed to his countrymen’s abject poverty and backwardness. He was the first religious leader to suggest that the people’s illiteracy was the primary cause of the country’s demise. He saw that the people of India needed to figure out two things: how to improve their economic situation and how to develop their faith and moral sense.

Swami Vivekananda sought to establish an organization to aid the impoverished and improve their standards by providing them with education in order to achieve his goal of bettering people’s lives. He also wanted to make a difference in the lives of women all over India.

He went abroad for the first time in 1893 to participate in the World Parliament of Religions. He believed that the Parliament would not only give him a larger platform to promote Ramakrishna’s teachings, but would also assist him in obtaining financial support for his mission of upliftment of the masses.

Swami Vivekananda became renowned as the ‘orator by divine right’ and the’messenger of Indian wisdom to the Western world’ in the Parliament. Vivekananda toured extensively throughout the eastern United States and London for the following three and a half years to disseminate the word of ‘Vedanta.’

Swami Vivekananda returned to India in 1897 and presented a series of lectures throughout the country before returning to Calcutta. He founded the ‘Ramakrishna Mission,’ a social service organization that spread the principles of ‘Practical Vedanta’ and established hospitals, schools, colleges, hostels, and rural development centers, among other things.

Swami Vivekananda purchased a large land in Belur in 1898, which became the monastery’s permanent residence. The location has been dubbed ‘Ramakrishna Math’ and is open to the public. Vivekananda adapted ancient monastic values to modern life’s circumstances.

He founded the ‘Ramakrishna Mission’ and ‘Ramakrishna Math,’ which aided in the upliftment of the populace while also introducing the Indian concepts of ‘Vedanta’ and ‘Yoga’ to the Western world.

Swami Vivekananda had a great interest in spirituality from a young age, which prompted him to eventually become a’sanyasi’. He vowed to pursue a life dedicated to improving the lives of the poor and oppressed.

On July 4, 1902, while meditating, he passed away. His death was reportedly caused by the rupturing of a blood artery in his head. His pupils claimed he had achieved’mahasamadhi,’ and that the rupture was caused by his ‘brahmarandhra,’ a hole in the crown of his head, being punctured while achieving’mahasamadhi.’

On the banks of the Ganges at Belur, Swami Vivekananda’s body was burnt on a sandalwood funeral pyre.

Many Indian and Western leaders have credited Vivekananda with spiritually awakening India. Jamsetji Tata founded the ‘Indian Institute of Science,’ one of the country’s most well-known research universities, as a result of Swami Vivekananda’s teaching and vision.

“Have you seen God?” said this Hindu monk, who dedicated his life reviving Hinduism and promoting the Indian ideas of ‘Vedanta’ and ‘Yoga’ to the Western world.

At the 1893 Parliament of the World’s Religion in Chicago, his speech began with the words “Sisters and brothers of America…” and drew a thundering two-minute applause and standing ovation from 7000 people.

In India, the birthday of this great spiritual figure is commemorated as National Youth Day.

Many people around the world are still inspired by his famous phrase, “Arise, awake, and stop not until the objective is accomplished.”