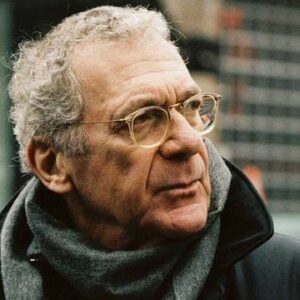 Sydney Pollack was an American filmmaker, producer, and actor best known for directing and producing the film ‘Out of Africa,’ for which he received Academy Awards for directing and producing. His formative years in South Bend, where he was born in the early 1930s to first-generation Russian-American parents, were not good ones. His parents split while he was a youngster, and his alcoholic mother died while he was still in high school. However, it was when he was in school that he became interested in theatre. So, after passing out, he went to New York to pursue acting and made his Broadway debut in the mid-1950s. Later, he was summoned to serve in the military, and when he returned, he picked up where he left off. However, he quickly discovered that directing was a better fit for him than acting, and he began directing films in the middle of the 1960s. With a succession of successes, he quickly established himself in Hollywood, winning several prizes and accolades. Pollack became a prolific producer in the latter portion of his career, while continuing to act in supporting roles. ‘Margaret,’ his final work, was released almost three years after his death.

Sydney Irwin Pollack was born in Lafayette, Indiana on July 1, 1934. David Pollack, his father, was a pharmacist and a semi-professional boxer, and Rebecca (née Miller), his mother, was a pianist and a vocalist. Bernie, his younger brother, went on to become a costume designer, actor, and producer. Sydney grew up in South Bend, Indiana, after his family relocated when he was a toddler. However, it was not a joyous period. His mother became an alcoholic as a result of her emotional troubles. His parents split after that, and his mother died when he was sixteen.

Sydney attended South Bend High School for his studies. It was here that he became interested in theatre for the first time. He went to the Neighborhood Playhouse School of the Theatre in New York after graduating from high school in 1952, despite his father’s wishes for him to become a dentist. He studied theater with Sanford Meisner, who is famed for his ‘Meisner technique,’ from 1952 to 1954. Between terms, he worked as a timber truck driver to help support his school. Later, he took on the role as Meisner’s assistant.

Sydney Pollack made his Broadway debut in the comedy ‘The Dark Is Light Enough’ in 1955. The following year, he played Shuber in an episode of the popular television series ‘The Kaiser Aluminum Hour’ called ‘The Army Game.’
In 1957, his career was cut short when he was summoned to serve in the military for two years. After his release, he returned to New York and continued his acting career on shows including ‘Playhouse 90,’ ‘Armstrong Circle Theatre,’ ‘Star time,’ and ‘The United States Steel Hour,’ among others.

He began working as Meisner’s assistant side by side. He had understood at that time that acting was not his strong suit, so he turned to teaching as a source of income. Simultaneously, he continued to appear on several shows.
His buddy John Frankenheimer invited him to Los Angeles in 1960 to work as a language coach for his next film’s kid performers. Pollack took the job and relocated to Los Angeles.

Pollack met Burt Lancaster in Los Angeles, who urged him to try his hand at directing. Meanwhile, he continued to feature in many television shows, the most notable of which were ‘The Twilight Zone’ (1960) and ‘Have Gun Will Travel’ (1961). He directed a few episodes of these shows as well.

Pollack made his cinematic debut in 1962 as Sgt. Owen Van Horn in the film ‘War Hunt.’ With ‘The Slender Thread,’ he made his feature directorial debut in 1965. Despite receiving mixed reviews and a dismal box office performance, it got two Academy Award nominations.

His film ‘This Property Is Condemned’ was released in 1966. The plot was based on Tennessee Williams’ 1946 one-act drama of the same name, set in a fictitious village in Mississippi during the Great Depression. It did, however, do poorly at the box office.

In 1968, he released two films: ‘The Scalphunters,’ a western about a fur trapper, and ‘Castle Keep,’ a military drama based on William Eastlake’s novel of the same name. He had to wait another year for a big hit, though. ‘They Shoot Horses, Don’t They?’ was a financial and critical triumph when it was released on December 10, 1969. Pollack was also nominated for an Academy Award for Best Director, but he didn’t win.

Three years later, on December 21, 1972, his next picture, ‘Jeremiah Johnson,’ was released. The film was a smash blockbuster, based in part on the story of mountain man John “Liver-Eating” Johnson. Following that, he directed ‘The Way We Are,’ a romantic drama picture (1973). The picture, which was partially told in flashback and garnered a lot of nominations and prizes, was not only a commercial triumph, but it also received a number of nominations and accolades.

‘The Yakuza,’ his second picture, was released in Japan in 1974 and in the United States a year later. He was both the director and producer of the film, but it received a lukewarm response at the box office. In comparison, his following film, the political thriller ‘Three Days of the Condor,’ which was released in 1975, performed pretty well. Pollack directed and produced ‘Bobby Deerfield’ in 1977, but the film failed to wow the public. As a result, he stopped producing and focused on directing for the time being.

The film ‘Tootsie,’ which was released on December 17, 1982, recounts the story of a skilled actor who is forced to assume the identity of a woman since no one wants to hire him. The picture received 10 Academy Award nominations and broke all of his prior box office records. ‘Out of Africa,’ Pollack’s second film, was released in 1985. It was made on a $28 million budget and grossed $128.5 million at the box office, winning seven Academy Awards. Despite its length, the film is one of his greatest.

He produced two films in 1988 and 1989: ‘Bright Lights, Big City’ and ‘The Fabulous Baker Boys.’ ‘Havana’ was his next project as a filmmaker (1990). The picture, however, was a box office flop. Following that, Pollack began to produce pictures on a regular basis, but he did not completely abandon directing. ‘The Firm’ (Director-Producer, 1993), ‘Sabrina’ (Director-Producer, 1995), ‘Random Heart’ (Director, 1999), and ‘The Interpreter’ are among the films he has now directed and produced (Director, 2005).

‘Sketches of Frank Gehry,’ a documentary film directed by Pollack, was released in 2006. It is about the life and work of Frank Gehry, a Canadian-American architect who was also a friend of his. It was his final picture as a director.
Although he was better known as a feature film director and producer, the actor in him never died. He continued to feature in minor roles in several films and television programs.

In 2007, he played Marty Bach in Michael Clayton, an award-winning performance. However, his most recent acting role was in Paul Weiland’s film ‘Made of Honor,’ which was produced by Neal H. Moritz and directed by Paul Weiland.

‘They Shoot Horses, Don’t They?’ was Pollack’s first significant piece (1969). The picture, which depicted the Great Depression, was not only a box office success but also received multiple nominations and accolades. Another of his significant works is ‘The Way We Are’ (1973). Even now, it is regarded as one of the best romantic films ever made.

His 1982 film ‘Tootsie’ is regarded as one of his greatest efforts. After ‘E.T. the Extra-Terrestrial,’ it was 1982’s second highest grossing film. Another of his notable works is ‘Out of Africa.’ It not only fared well at the box office, but it also received eleven Academy Award nominations, winning seven of them.

Pollack met Claire Bradley Griswold, a student at the Neighborhood Playhouse School of the Theatre, while teaching there. They married in 1958 and had three children: Steven, a son, and Rebecca and Rachel, two daughters. In 1993, Steven was killed in an aircraft crash.

Pollack’s health began to deteriorate in 2007, and he withdrew from work. On May 26, 2008, he died of cancer at home. His ashes were strewn after he was cremated. His wife and two kids survived him.