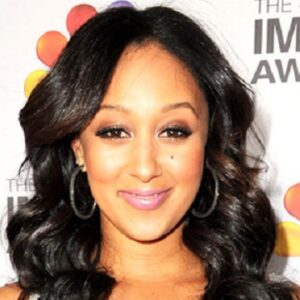 Tamera Mowry is an American actress and model best known for her role as Tamera Campbell in the ABC/WB sitcom “Sister, Sister,” in which she co-starred with her twin sister Tia Mowry. Tamera and Tia had an innate flair for performing and thought they were destined to be actors from the start. They immediately persuaded their parents to relocate from Germany to Los Angeles, California, because of their artistic abilities. After a modest start in the entertainment industry with a few guest roles and appearances on talent shows, the girls broke through with the sitcom ‘Sister, Sister,’ and haven’t looked back since. Tamera’s next big break came when she landed the role of Dr. Kayla Thornton in the medical drama ‘Strong Medicine.’ Following that, she appeared in ‘Roommates,’ ‘Things We Do for Love,’ and ‘Tia & Tamera,’ the latter of which was a highly hit reality show following the twin sisters’ day-to-day life. Tamera is currently one of the anchors of the chat show “The Real,” which debuted on July 15, 2013. She is a talented singer in addition to her artistic abilities. Several times, the twins have demonstrated their vocal prowess. During season five and six, they sang covers of ‘You Can’t Hurry Love,’ ‘Amazing Grace,’ and ‘I’m Going Down,’ as well as the ‘Sister, Sister’ theme song.

Tamera Darvette Mowry was born in Gelnhausen, West Germany, on July 6, 1978, to mixed-race parents. Darlene Renee Mowry (née Flowers) is of Afro-Bahamian ancestry, while Timothy John Mowry is of English ancestry. Her father was an army veteran who eventually worked as a custodial officer for the Glendale Police Department. Her mother is the manager of her children.

Tamera Mowry has three brothers and sisters: a twin sister, Tia, who is two minutes her junior, and two younger brothers, Tahj and Tavior. When the twin girls were eight years old, they became born-again Christians.
She went to Pepperdine University to study psychology after finishing her elementary education.

With a natural gift for acting and a desire to establish a name for themselves in the world of theater, the twin sisters persuaded their parents to relocate to California so that they could pursue a full-time professional acting career. In 1990, the parents caved into their children’s requests, and the family relocated to Los Angeles.

Tamera and Tia got their start in the entertainment industry by competing in pageants and talent events. They soon landed themselves in minor roles in television shows. Tamera initially appeared on screen as Penelope in ‘Flesh n Blood.’ She next appeared in ‘True Colors,’ before joining her twin sister on the set of her brother’s program ‘Full House.’
Tamera made her television debut in the sitcom ‘Sister, Sister,’ in which she co-starred with her twin sister Tia. After a producer spotted them on the set of ‘Full House,’ a show in which their brother had regular appearances, the series was developed. ‘Sister, Sister’ premiered on ABC, but after two years, the network canceled it, and it was bought up by The WB, where it aired for another four years.

Tamera appeared in guest parts on many television shows while working on ‘Sister, Sister,’ including ‘Are You Afraid of the Dark?’ and ‘Smart Guy.’ ‘The Adventures of Hyperman’ and ‘Detention’ featured her in voice roles. She also appeared in the TV movies ‘Something to Sing About’ and ‘Seventeen Again,’ both of which were produced in the year 2000.
She and her sister Tia landed a part in the interstitial series ‘Express Yourself’ in 2001. The show aired from 1995 through 2005. Meanwhile, she landed the lead part of Dr. Kayla Thornton in the medical drama ‘Strong Medicine’ in 2004. The show was a smash hit, running for two years until 2006.

She starred in the Disney Channel original television film “Twitches” and its spin-off “Twitches Too” in 2005. She appeared alongside her sister Tia once more in it. She also did voice work for the animated series ‘Family Guy.’
In ‘Roommates,’ the actress has a lead part as Hope Daniels. She also appeared in the films ‘Things We Do for Love’ and ‘Tia & Tamera,’ a reality show that followed the twin sisters’ daily life. Tamera was planning her wedding at the time, and Tia was pregnant. The show aired for three seasons on the Style Network.

After that, she appeared in a few TV movies, including “Double Wedding,” “Rebounding Vanessa,” and “Christmas Angel.”
Tamera Mowry is currently one of the hosts of the discussion show ‘The Real,’ alongside Adrienne Bailon, Jeanne Mai, and Loni Love, all of whom are former Disney Channel stars. On July 15, 2013, the show debuted.

Tamera, along with her sister Tia, has created a singing career in addition to acting. In the early 1990s, the twin sisters were members of the Voices singing group. In 1992, the trio released their first single, “Yeah, Yeah, Yeah!” which reached No. 72 on the Billboard Hot 100.

Tamera Mowry’s career-high point came when she and her sister Tia landed a main part in the ABC/WB sitcom “Sister, Sister.” It was a huge success for six years. Tamera Campbell’s artistic talent and on-screen personality were praised as she mastered her part.

With the medical drama ‘Strong Medicine,’ Tamera’s career took another step forward. The series was a high-rated original drama that focused on feminist politics, health issues, and class struggle. From 2000 until 2006, it was broadcast on the Lifetime network. Tamera gave her all in her performance as Dr. Kayla Thornton, a young medical prodigy.

For ‘Sister, Sister,’ Tamera Mowry won the Image Award for Outstanding Actress in a Comedy Series twice (in 1999 and 2000). Tia, her sister, and split the award.

Tamera revealed in a 2013 interview that she lost her virginity at the age of 29. However, she then felt bad and swore to be chaste till she married.

Tamera dated Fox News Correspondent Adam Housley for over six years before marrying him on May 15, 2011, in Napa Valley, California. On November 12, 2012, the couple welcomed their first child, a male named Aden John Tanner Housley, and on July 1, 2015, a daughter named Ariah Talea Housley.
Milano, her Shih Tzu, is her pet.

Tamera Mowry is an actress who is well-known for her role in Tamera Mowry has a net worth of $4 million and is an American actress. Mowry is most recognized for her appearances on television. Many people may recognize her from the film “Sister, Sister,” in which she co-starred with her identical twin sister, Tia Mowry. She proceeded to star in a variety of TV series throughout the next few years. Tamera is well known for her role in the reality television show “Tia & Tamera,” which followed the lives of two sisters. Mowry was also a host on the talk show “The Real” for seven years.