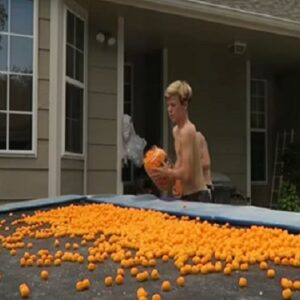 A professional scooter rider and YouTube vlogger, Tanner Fox has more than 7 million fans on social media. He has a staggering 4.7 million YouTube subscribers and 2.3 million Instagram followers. He has always had a passion for recording videos and posting them online. He initially posted videos of himself doing weird things, which progressively increased his popularity and helped him become a YouTube sensation. When he was just 11 years old, he was expelled from a private Catholic school for filming in class and posting it to his YouTube account since he was such a video junkie! It is thought that the reason he is so well-liked on social media is because of his career choice—scooter riding! Tanner Fox is currently one of the most well-known figures in the freestyle scooter sport, with millions of devoted followers. Additionally, he enjoys skateboarding with his best friend Jake Angeles in addition to freestyle scooter riding.

With millions of YouTube subscribers, Tanner Fox is currently one of the most famous personalities in the freestyle scooter riding genre.

In September 2011, he started his now-self-titled YouTube account and uploaded his first videos. He is a YouTube phenomenon, and as of August 6, 2016, his channel was ranked as having the fastest growth rate. In addition to stunt videos, Fox’s channel also include vlogs, challenge videos, and pranks, making it an extremely variety channel that draws viewers in often.

He executes a variety of entertaining and thrilling tricks on his scooter, all of which are inspired by the well-known rider Dylan Morrison. His scooter tricks of choice are flairs, which are featured in the majority of his skateboarding and scootering films. Numerous well-known companies, including Lucky Scooters, Root Industries, and the Grind Shop, have supported Fox and his channel on their paths to success. He occasionally gives them demo rides as well. His most well-known video to date features Harry Main in “BMX vs. SCOOTER.”

Additionally, he has worked with Roman Atwood and had the opportunity to drive his GTR. In addition to Jake Angeles, Roman Atwood, and Harry Main, he has also collaborated with Justin Stuart, Casey Neistat, and Carson Lueders. As of late 2016, Tanner Fox had more than 3.4 million subscribers and 400 million viewers on the channel. He uploads films practically daily, and in a single day, the channel receives almost 2 million views across all of its videos. This is predicted to bring in $3000 each day, or $1.1 million year!

Why Tanner Fox Is So Unique?

Despite the fact that his incredible skills on the scooter are essential to his success, it is his brains and hustler’s mindset that have helped him to grow his fan base to new heights. His whole success thus far has also been influenced by his unshakable love and commitment for his supporters. The way Fox interacts with his pals and has fun with them in his videos makes him incredibly accessible to his fans because it is how contemporary youth engage with one another.

Past Fame of Tanner Fox Bio

Selling goods on his website tfoxbrand.com, such as the Special Edition 500K Subscriber shirt, TFOX Dad Hats, and 8 Sticker Packs, brings in a lot of money for Tanner Fox. Fox is currently thought to be worth an astounding $500,000! At the age of 16, Fox purchased his dream automobile, a Nissan GT-R with a price tag close to $100,000, thanks to his enormous financial success.

Fox attends a charter school for a few hours on two days a week, although he is primarily homeschooled. Kirby, the dog he owns, has his own Instagram account.

In his own time, he enjoys visiting Barcelona, Spain, and spending time with his family and friends in San Diego.

Regarding his romantic history, there were reports that he previously dated Anna, a buddy from high school, but nothing was ever proven. After much rumor, the YouTube star finally admitted in April 2017 that he has a new girlfriend named Taylor who is special to him. However, they have been dating for a while; she is not brand new. She is not new, he said, and they have been dating for several months.

The estimated net worth of Tanner Fox is $6 million.

Flares are his preferred scooter trick!