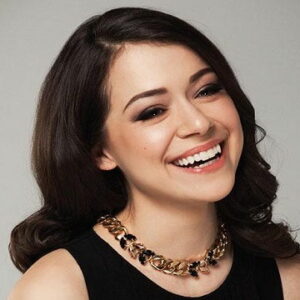 Tatiana Gabriele Maslany is a popular Canadian actress who is best known for her role in the television series ‘Orphan Black’. Tatiana Maslany is an extremely talented actress who has carved out a niche for herself in both films and television series. She began performing on stage as a child and has never shied away from difficult roles. Maslany captivated her audience with her portrayals of Penny, the kidnapped victim in the Canadian series ‘Flashpoint,’ and Claire, the rebellious teen in ‘Picture Day.’ Her acting ability peaked when she portrayed a dozen clones in ‘Orphan Black,’ each character being completely unique and unlike any other character in the series, both physically and psychologically. She also appeared in a number of other television series, including ‘Being Erica’, ‘Heartland’, ‘World Without End’, and ‘The Nativity’. She is also a well-known face in film, having given some incredible performances in films such as ‘Cas and Dylan’, ‘Two Lovers and a Bear’, ‘Grown Up Movie Star’, ‘The Other Half’, ‘Diary of the Dead’, ‘Woman in Gold’, and ‘The Vow’. She has won several of the industry’s most prestigious awards, including the Canadian Screen Award, the ACTRA Award, the Emmy Award, the Constellation Award, and the Gracie Award. She is a versatile actress who easily fits into any role that presents itself to her.

Tatiana Maslany was born in Regina, Saskatchewan, on September 22, 1985, to Dan and Renate Maslany. Her father is a carpenter, and her mother works as a translator. Tatiana is the eldest of her siblings, with Daniel and Michael as her younger brothers.

She is a multilingual and multicultural individual as a result of her Polish, German, Romanian, Austrian, and Ukrainian ancestors.

Prior to learning English, she studied French in her elementary school’s French immersion program. Additionally, when she was a child, her mother and grandparents taught her German.

She was drawn to stage performances from an early age, and gave her first performance as a dancer at the age of four. She began performing in community theatre and musicals at the age of nine.

She earned her high school diploma from Dr. Martin LeBoldus High School in 2003. She was a member of numerous school productions during her senior year of high school.

Throughout her graduation years, she landed acting jobs that required her to travel throughout Canada. She would be away for several months on her shoot and then return to her school in Regina. As a result, she was never able to integrate herself into either of the experiences.

She began performing theatrical acts shortly after graduation and was frequently on the road due to her schedule. She eventually settled in Toronto, Ontario, at the age of twenty.

Tatiana Maslany began her career in 2002 with the Canadian television series ‘2030 CE.’ She made her film debut two years later in the role of a ghost in ‘Ginger Snaps 2: Unleashed.’

She quickly moved into improvisational theater, where she spent a decade performing comedic improvisation. Additionally, she competed in the Canadian Improv Games. Tatiana Maslany, a certified improv trainer, is now a member of the General Fools Improvisational Theater.

She appeared in the 2007 films The Messengers’ and ‘The Diary of the Dead’. In the same year, she lent her voice to another film, ‘Eastern Promises.’ In 2007, she also appeared in several television series, including ‘Sabbatical,’ ‘The Robber Pride,’ ‘Stir of Echoes: The Homecoming,’ and ‘Redemption SK.’

She returned to Canadian television in 2008 with the television series ‘Instant Star’. She also appeared as a guest star in another Canadian series, ‘Flashpoint,’ for which she was nominated for a prestigious Gemini Award.

She gave an outstanding performance as a heroin addict in the 2010 Canadian comedy television series ‘Being Erica.’ She appeared in two films that year: ‘In Redemption’ and ‘Toilet’. She received widespread acclaim for her portrayal of Mary, Jesus’ mother, in the British television series ‘The Nativity.’

In 2011, her most notable role was as a contract killer in the film adaptation of John Sanford’s ‘Certain Prey’. Among the year’s other works were films such as ‘The Entitled’ and ‘Violet and Daisy’.

In 2012, she starred in the film ‘Picture Day’ as protagonist Claire. While she limited herself to one television series, ‘World Without End,’ this year, she did manage to squeeze in a few films, including ‘Blood Pressure,’ ‘The Vow,’ and a short film, ‘Waiting for You.’

Tatiana Maslany was at her best in 2013. She starred in the popular Canadian science fiction thriller ‘Orphan Black’ as Sarah Manning and a cohort of Sarah’s clones. ‘Orphan Black,’ which aired until August 12, 2007, brought out the best in Tatiana Maslany, who effortlessly portrayed more than ten characters in the same series. In 2013, she also appeared in the television series ‘Cracked,’ ‘Captain Canuck,’ and ‘Parks and Recreation,’ and starred in the film ‘Cas and Dylan.’

Tatiana Maslany demonstrated her extraordinary acting ability in ‘Orphan Black’ by flawlessly portraying nearly a dozen characters. She effortlessly absorbed the behavior and personality of each clone, which bore no resemblance to any other clone. This television series was undoubtedly a watershed moment in her career, earning her numerous awards and widespread recognition.

She also established herself as a film actress with endearing performances in ‘Grown Up Movie Star,’ ‘The Other Half,’ and ‘The Picture Day.’

Tatiana Maslani won the Gemini Awards (2009) for her performance in ‘Flashpoint’ in the category of Best Actress in a Guest Role, Dramatic Series.

She won the ‘World Cinema Special Jury Prize for Acting’ at the 2010 Sundance Film Festival for her performance in the film ‘Grown Up Movie Star’. She also won a Gemini Award for Best Performance in a Guest Role, Dramatic Series in the same year for ‘Bloodletting and Miraculous Cures’.

In 2012, she won the Whistler Film Festival’s Best Actor in a Borsos Film Award for her performance in ‘Picture Day.’

In 2013, she received an ACTRA Award and an award from The Hamptons International Film Festival for her outstanding performance on ‘Picture Day.’ She won the third Critics’ Choice Television Award, the TCA Award, the Young Hollywood Award, and the second Canadian Screen Award for her difficult roles in ‘Orphan Black.’

In 2017, she won an ACTRA Award for her outstanding performance in the film ‘Two Lovers and a Bear.’

Tatiana Maslany has been dating Welsh actor Tom Cullen since 2011, and the couple currently resides in Los Angeles. They met for the first time during the filming of ‘World Without End’ in Budapest.

Tatiana Maslany net worth: Tatiana Maslany is a Canadian actress who has a net worth of $3 million. She is best known for starring in the television series Orphan Black, The Nativity, Being Erica, and Heartland. In 2013, she won an ACTRA for her role as “Claire” in the film Picture Day, and a Phillip Borsos Award for her performance in the film Cas & Dylan.