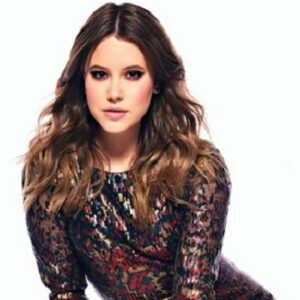 This stunning damsel won a state-wide beauty and talent competition when she was six years old. Taylor Danielle Spreitler is an American film and television actor best known for her roles on TV shows including “Days of Our Lives,” “Melissa & Joey,” and “Kevin Can Wait.” When she was 16 years old, “Soap Opera Digest” listed her as one of the “Hottest Newcomers.” She entered the entertainment industry as a model, and her first appearance in a commercial was for a national ‘Motrin’ campaign. Moving on, she was featured in commercials for a number of companies, including “Chuck E. She debuted in acting in 2005, appearing in one episode of the American TV series “Law & Order: Special Victims Unit,” and a few years later, she made an appearance in the short film “All Souls Day.” Her big break came with the role of “Mia McCormick” in the American daytime soap opera “Days of Our Lives,” one of the longest-running scripted TV series worldwide. Her notable roles include those of “Kendra Gable-Witt” in the American TV sitcom “Kevin Can Wait,” “Lennox Elizabeth Scanlon” in the American TV sitcom “Melissa & Joey,” and “3 Day Test,” “The Contractor,” and “Girl on the Edge.” She has also appeared in movies like “3 Day Test,” “The Contractor,” and “Girl on the Edge.”

Kira Spreitler and Daniel Spreitler welcomed her into the world on October 23, 1993, in Hattiesburg, Mississippi, the United States. Before the family moved to Amory, Mississippi, she was born and raised in Wiggins, Mississippi.

She won a talent and beauty competition at age six. She has always expressed gratitude for her family’s and her parents’ contributions to her life.

Taylor has a degree. She recalled the occasion by stating, “I flew home and surprised my best buddy at his graduation, and I remember going to my mom and saying, “My graduation was so much cooler than this.” I had Melissa Joan Hart give my commencement address.

Taylor began her career in showbiz as a model. Her debut appearance in a commercial took place in a national ad for “Motrin.” Since then, she appeared in other advertisements for different companies, including “JIF,” a brand of peanut butter, “Chuck E. Cheese’s, and Hess Corporation, a leading independent energy company worldwide.

She made her acting debut in 2005 with the well-known American crime drama series “Law & Order: Special Victims Unit,” in which she played “Chloe Sellers” in the episode “Pure.”
She performed the role of “Alice” in the short film “All Souls Day” in 2007.
In July 2009, her name was listed as one of the “Hottest Newcomers” in the issue of “Soap Opera Digest.”

She then went on to play the brief but memorable part of “Mia McCormick” in the NBC-produced popular American daytime soap opera “Days of Our Lives,” which has grown to become one of the world’s most enduring scripted television series. Taylor appeared in 139 episodes of this show from January 6, 2009, to June 23, 2010, and as a result, she received enormous exposure.

After leaving “Days of Our Lives,” she joined the cast of “Melissa & Joey,” an American television sitcom with Melissa Joan Hart and Joey Lawrence as the eponymous characters. Taylor performed the role of “Lennox Elizabeth Scanlon,” the rebellious teenage niece of Joan’s character “Melanie Alison.” From August 17, 2010, through August 5, 2015, a total of 104 episodes from four seasons of the program were broadcast on ABC Family.

She first appeared on the big screen in the 2012 movie “3 Day Test,” which was written and directed by Corbin Bernsen and starred George Newbern, Bernsen, and Megyn Price in the part of “Lu Taylor.”
She appeared as “Trish Cavanaugh” in four episodes of “Never Fade Away,” as “Taylor Culphers” in “Friending Emily” of “Law & Order: Special Victims Unit,” and as “Angela Curson,” a high school girl, in “Stalked at 17,” an American teen drama that was broadcast on “Lifetime TV.”

She starred as McKenzie Chase in the 2013 American direct-to-video action movie “The Contractor,” which starred “Danny Trejo” in the title role. She portrayed “Young Victoria” in the television movie “Category 5” the following year.

She portrayed “Marissa” in the 2017 American supernatural thriller “Amityville: The Awakening,” which stars Jennifer Jason Leigh, Cameron Monaghan, Kurtwood Smith, Bella Thorne, and Thomas Mann. It is the tenth installment of the main Amityville film series.
In addition, she sang during the Liberty Bowl before festivities broadcast on ESPN.

When her father committed suicide on July 7, 2016, it was a tragic event that she had to deal with.
Although nothing is known about Taylor’s personal life, some reports claim that she dated TV actor and former model Dylan Patton.

American actress Taylor Spreitler has a $1 million net worth. In October 1993, Taylor Spreitler was born in Amory, Mississippi. She played Mia McCormick in the serial opera Days of Our Lives from 2009 to 2010. From 2010 through 2015, Spreitler played Lennox Scanlon on the TV show Melissa & Joey.