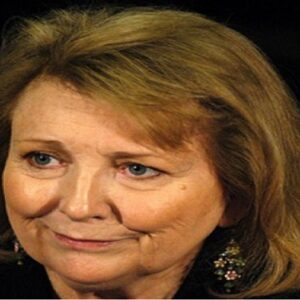 Teri Garr is a well-known American actress, dancer, and singer who is best known for her appearance in the 1982 American comedy ‘Tootsie,’ for which she received an Oscar nomination. Garr made her first important appearance in the 1974 award-winning American psychological thriller ‘The Conversation,’ whereby she began her career as a background dancer in movies. Her reputation soared to new heights after she played a neurotic girlfriend in the 1982 film ‘Tootsie.’ She had previously appeared in films such as ‘Young Frankenstein,’ and ‘Oh God!’ She revealed in 2002 that she had multiple sclerosis, a disease in which nerve cells in the brain and spinal cord are destroyed, causing physical, emotional, and psychological issues. She also stated that she made it public in order to help other individuals suffering from the sickness by letting them know they are not alone and that there are solutions to conquer it. She was appointed National Ambassador and National Chair of the National Multiple Sclerosis Society’s Women Against Multiple Sclerosis program. In 2006, she suffered a burst cerebral aneurysm. She has not appeared in any films or television series since 2007, despite her condition improving dramatically subsequently.

Teri Garr was born in Lakewood, Ohio, in the United States, on December 11, 1944 (other accounts claim 1947). Eddie Garr, a well-known actor and comedian, was her father, and Phyllis Lind, a model and dancer, was her mother. Ed and Phil are her two older brothers.

Her family travelled around the country because of her father’s job. Her father died when she was just eleven years old. Her mother supported her three children by working in the wardrobe department at NBC and other studios. Teri acquired her interest for dance around this period.

Teri Garr began her career as a background dancer in films like ‘Viva Las Vegas’ (1964). She also made cameo appearances in commercials and minor roles in television shows. Her first important film was a supporting role in the American psychological thriller ‘The Conversation’ (1974). The film was a big success, receiving numerous Oscar nominations.

She also had a supporting role in the horror comedy ‘Young Frankenstein’ in 1974, which helped her gain fame. Mel Brooks directed the film, which got multiple award nominations, including two Oscar nods.

She went on to star in a number of additional blockbuster films over the next few years. ‘Oh, God!’ directed by Carl Reiner, in which she played a minor part, was released in 1977. She also starred in Steven Spielberg’s sci-fi film ‘Close Encounters of the Third Kind’ in the same year.

She starred in the 1979 American picture ‘The Black Stallion,’ which was based on Walter Farley’s children’s novel of the same name. The plot revolves around a man who is shipwrecked on a deserted island and befriends a wild steed.
In the 1982 film ‘Tootsie,’ she co-starred alongside Dustin Hoffman as his girlfriend. Both the audience and the critics praised her performance. She was nominated for an Academy Award for Best Supporting Actress, but Jessica Lange won the award.

‘Expired,’ a 2007 comedy drama directed by Cecilia Miniucchi, and ‘Kabluey,’ another 2007 film directed by Scott Prendergast, were her most recent films. Due to her sickness, she has not appeared in any television or film since 2007.

Teri Garr’s first big picture, ‘The Conversation,’ was released in 1974 and was the first significant film of her career. In addition to Garr, Francis Ford Coppola wrote, produced, and directed the film, which stars Gene Hackman, John Cazale, Allen Garfield, and Cindy Williams. The plot centred around a security specialist whose recordings revealed a possible murder. At the 1974 Cannes Picture Festival, the film received the ‘Golden Palm’ Award. The film was also nominated for three Academy Awards.

Teri Garr’s most noteworthy achievement is the comedy film ‘Tootsie,’ which was released in 1982. Sandra, Dustin Hoffman’s neurotic girlfriend, was played by Garr. The film, directed by Sydney Pollack, tells the story of an actor who, despite his brilliance, no one wants to work with because of his tough personality. Garr was nominated for an Academy Award for Best Supporting Actress for her role in the film. The picture received ten Academy Award nominations and was a major economic success, becoming the year’s second-highest grossing film. The majority of the feedback was good.

‘Mom and Dad Save the World,’ a 1992 sci-fi comedy, was another of her notable films. Garr appeared in the film, which was directed by Greg Beeman and included Jeffrey Jones, Jon Lovitz, Thalmus Rasulaa, Wallace Shawn, and Eric Idle.

She also starred in the criminal thriller ‘Perfect Alibi’ in 1995. Kevin Meyer directed the film, which was based on Majer Krich’s novel “Where’s Mommy Now?” The plot centres around an adulterous husband who attempts to murder his wife in exchange for her money.

Her most recent film performance was in Scott Prendergast’s comedy ‘Kabluey,’ which she starred in in 2007. Prendergast himself starred in the picture, which also included Lisa Kudrow, Christina Taylor, Jeffrey Dean Morgan, and Angela Sarafyan.

Teri Garr was nominated for an Academy Award (Oscar) for her role in the 1982 picture ‘Tootsie,’ for which she received a nomination.

Teri Garr married contractor John O’Neil in 1993. Molly, their adoptive daughter, was born to them. After a few years, though, the couple divorced.

Despite her battle with multiple sclerosis, she continued to act and aid others who were suffering from the condition for many years.

In the year 2006, she experienced a ruptured cerebral aneurysm. Despite the fact that her illness improved over time, she has not been on television or in films since 2007.

Teri Garr has a net worth of $4 million dollars and works as an actress and dancer in the United States. Teri Garr was born in Lakewood, Ohio, into a family of entertainers, and she booked her first tour, in “West Side Story,” shortly after graduating from high school.