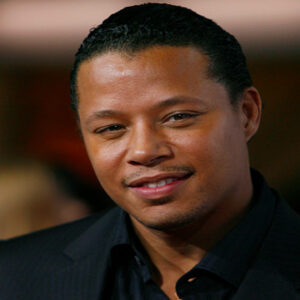 Terrence Howard is an American actor and singer best known for his role in the Oscar-nominated drama film ‘Hustle & Flow’. He made his TV debut in 1992’s The Jacksons: An American Dream and went on to star in films including Dead Presidents and Mr. Holland’s Opus. ‘Crash,’ an American drama film, gained him countless accolades and nominations, and ‘Hustle & Flow,’ another drama film, also got him numerous honors and nominations.
Howard grew up in a turbulent environment where he was frequently beaten by his father. Despite this, he pursued his aspirations and traveled to New York to seek an acting career. After a few years of tiny roles, he got his big break in ‘Dead Presidents.’ Howard can also sing. His debut album ‘Shine Through It’ came out in 2008. The album has eleven tracks and reached No. 31 on the US Billboard 200.

Terrence Howard was born in Chicago, Illinois, to Tyrone and Anita Howard.
He had a bad childhood because both his parents were abusive. At the age of two, he saw his father stab a guy, resulting in his father’s manslaughter conviction. Dad was released and his parents divorced.
Howard divorced his parents at 16 and lived on welfare for the rest of his life. At 18, he came to New York to study acting.

He started out at Pratt Institute in Brooklyn, New York, majoring in chemical engineering, but dropped out after two years to play minor roles in TV shows.

Terrence Howard’s first notable part was in the 1992 TV miniseries ‘The Jacksons: An American Dream’, when he played Jackie Jackson.

For his great performances in both films, he received critical acclaim for his role in Dead President and Mr. Holland’s Opus in 1995.

In the 1999 romantic comedy ‘The Best Man,’ he played a supporting part. The film was a big hit, earning multiple prizes. Howard won the NAACP Image Award for Best Supporting Actor.

‘In 2008, he released ‘Shine Through It’. Howard wrote or co-wrote all eleven tunes on the album, which spanned numerous genres. The album reached No. 31 on the US Billboard 200. In the same year, he appeared in the popular superhero film ‘Iron Man’. He also voiced Iron Man in the video game.

His most notable TV performance was in 2015’s ‘Empire’. It garnered him the ‘BET Award for Best Actor’ and other nominations. His recent films include Dead Man Down, House of Bodies, Sabotage, and Term Life (2016).

Paul Haggis’ 2004 American drama ‘Crash’ is one of Howard’s most noteworthy films. The film stars Sandra Bullock, Matt Dillon, and Brendan Fraser and deals with social and racial concerns in Los Angeles. Howard’s performance as Cameron Thayer earned him multiple accolades and awards. Though not a monetary success, the picture earned largely positive reviews.

One of Howard’s most successful works is ‘Hustle & Flow,’ directed by Craig Brewer. Howard plays the lead in the picture. He plays a pimp and a drug dealer who becomes a rapper after failing in life. Howard’s portrayal earned him multiple nominations and accolades, while the film itself won an Oscar for best original song.

He has a major role in the 2008 superhero blockbuster Iron Man. The picture, directed by Jon Favreau, also starred Robert Downey Jr., Jeff Bridges, and Gwyneth Paltrow. It made over $585 million at the box office. Howard was nominated for a Black Reel Award for his James Rhodes part. The film was nominated for two Oscars. The film had two sequels in 2010 and 2013.

Terrence Howard has garnered numerous honors and nominations for his outstanding acting abilities. The NAACP Image Award for Outstanding Supporting Actor in 1999’s The Best Man, the National Board of Review Award for Breakthrough Performance in 2004’s Crash, and the BET Award for Best Actor in 2015’s Empire.

Terrence Howard is an Oscar-nominated actor and musician with a $5 million net worth. Terrence would be considerably wealthier if he hadn’t had financial and marital issues, which we’ll discuss later in this essay.