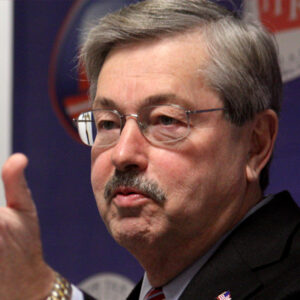 Terry Edward Branstad, America’s longest-serving governor, returned to politics in 2010, winning both the primary and general elections for Governor. He is now Iowa’s 42nd Governor. He was the ideal candidate from the outset, with a poll predicting that he would receive 70% of the vote. As a result of his election, the Republican Party defeated incumbent Democrat representative Chet Culver by a significant majority of 52.9 percent to 43.1 percent. When he was re-elected in 2015, he became the first governor in history to serve a sixth four-year term, surpassing George Clinton, the Governor of New York, who had served for 21 years. President Donald Trump just appointed him as the United States’ ambassador to China. Terry still has a lot up his sleeve, with 22 years as governor under his belt and counting, and he still has plans in the works. He has changed Iowa politics from the age of 36, making significant efforts to lowering the unemployment rate. He is well-read and has served in the army for his country. With his leadership, the locals have seen financial stability, and he has worked closely with schools and institutions to improve infrastructure and standards. He also boasts the distinction of having never lost an election.

He was born on November 17th, 1946, in Leland, Iowa, to Rita L. Garland, a Jewish mother, and Edward Arnold Branstad, a farmer of Norwegian American Lutheran origin.
He wasn’t wealthy as a child, and his parents raised him as a Lutheran until he subsequently converted to Catholicism.

‘Forest City High School’ was where he finished high school in 1965. He had always been a bright student at school, and he went on to enhance his education.
He graduated from the University of Iowa with a bachelor’s degree in 1969 and promptly entered national service by joining the United States Army Military Police for two years.
He worked as a military policeman at Fort Bragg, one of America’s largest military bases in terms of population, until 1971, for which he was awarded a commendation medal.
He felt his schooling was incomplete after returning from military. As a result, he enrolled at Drake University Law School and graduated with a law degree in 1974.

The Start of a Successful Career

Branstad’s political career took off in 1972 when he was elected to the Iowa House of Representatives, where he represented his hometown as well as the entire north-central Iowa district.
From 1979 to 1983, he served as Iowa’s lieutenant governor, defeating two strong Republican candidates in the primary election.

He was elected Governor at the age of 36, after defeating Democrat Roxanne Conlin. In 1983, he was named Iowa’s youngest governor in the state’s history.

From 1983 until 1999, he served four terms as governor of Iowa, making him the only governor in the state to do so.
During this time, he bolstered Iowa and helped it recover from its crisis. He was instrumental in reducing the impact of the economic downturn in Iowa. He also dealt with the historic 1980s agriculture crisis.

In 1985, he declared an economic emergency in order to end the farm crisis, which included a temporary prohibition on farm foreclosures. The following year, he reduced state agencies and gave the Governor sole authority to designate their directors.

However, not everything went well for him; in his first year, he was dealt a huge blow when he discovered a $90 million hole in the state budget. Despite this, he was able to get Iowa back on its feet and make its economy prosper thanks to his ability to turn the tables.

Get Away From Politics

He shifted his focus away from politics after leaving the governorship following a successful tenure. He founded ‘Branstad and Associates, LLC’ to return to his legal background. He joined Pattee, Kaufman as a partner and afterward joined Robert W. Baird & Company as a financial advisor.

He was a visiting lecturer at the University of Iowa before being appointed president of ‘Des Moines University’ in 2003. He spent six years there until retiring in 2009. During his tenure as president, he encouraged professors and students to improve graduate rankings, and under his direction, the Wellness Council of ‘America’s first Platinum Recognition University’ was established.

Branstad ran for Governor of Iowa as a Republican in 2009. Following the announcement of Branstad’s return, a poll was conducted in which he received almost 70% of the vote.

After winning the Republican nomination, Branstad was ready to campaign for the general election, despite the fact that he did not have the support of the whole Republican Party.
Former state auditor Richard Johnson’s charges of “holding two sets of state budget books” instructing him to be “honest” to Iowa citizens were among the reasons for opposition.

In 2010, he ran for governor of Iowa and defeated incumbent Democrat Chet Culver, gaining by more over 50 percent of the vote.

In 2014, he ran for re-election as the incumbent Republican nominee, with Senator Kim Reynolds as his running mate. He was contested by Tom Hoefling in the primary election, but he won by a large margin of 83 percent votes.
In the general elections, he ran against Democratic Party nominee Jack Hatch, although Jack had little chance in front of him. He swept to a 59 percent victory in the 2014 general elections. His plan for the new term is to create 200,000 new jobs while cutting government spending by 15% and raising minimum salaries by a quarter percentage point.

After his first term, Major Works Branstad decreased the unemployment rate from 8.5 percent to 2.5 percent, which was his most significant achievement. He assisted Iowa in turning a 900 million dollar deficit into a 900 million dollar surplus.
He was appointed by George W. Bush to chair the ‘President’s Commission for Excellence in Special Education,’ where he was responsible for improving educational planning and performance for students with a variety of disabilities.

His work was deemed to be of such high quality that he was invited to join PATH’s national Advisory Council and was also named a public member of the ‘American Institute of Certified Public Accountants.’

He was awarded the title of ‘Knight Commander of the Court of Honour’ in 2015.
He accepted the position of US Ambassador to China, which was offered to him by current US President Donald Trump. If the Senate approves the nomination, Lieutenant Governor Kim Reynolds will take office as Iowa’s first female governor.

In June of 1972, Terry married the lovely Christine Johnson. Christine worked as a medical assistant and volunteered at hospitals and schools when she was younger.

Eric is the oldest of their three children, followed by Allison and Marcus. He is now the proud grandfather of seven grandchildren since all of his children have married.
While Terry has been in and out of politics, he has managed to keep his family out of any problems or the spotlight.

Terry is one of the wealthiest politicians and one of the most well-known. Terry Branstad’s net worth is estimated to be $1.5 million, according to Wikipedia, Forbes, and Business Insider.

Branstad was a military police officer when he arrested the famed actress Jane Fonda on her way to an anti-war protest.