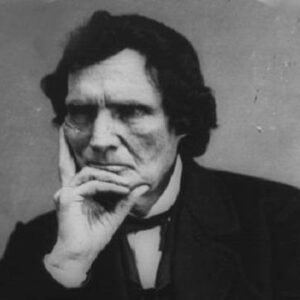 Republican politician Thaddeus Stevens was one of the most powerful people in the U.S. House of Representatives in the 1800s. He was very against slavery and unfair treatment of African-Americans. During the Reconstruction period, he worked hard to protect their rights. During Reconstruction, he helped write the Fourteenth Amendment because he cared a lot about civil rights. Thaddeus was born poor in a small town in Vermont. His father left the family when Thaddeus was very young, making his childhood very hard. He was also born with a club foot and developed a limp, which made it hard for him to move around. Even though he had a hard childhood, he became a great student and went on to become a lawyer. Since he had been through a lot as a child, he felt sorry for slaves and other people who didn’t have much in American society. He worked as a lawyer to make sure they were treated fairly. As he moved into politics, he kept his views on social issues and became a strong supporter of free education and an opponent of slavery’s growth. After the Civil War, he became a radical Republican who spoke out for equal rights for black people. After he helped write the Fourteenth Amendment, it was used as a basis for civil rights laws.

Thaddeus Stevens was born in Danville, Vermont, U.S., on April 4, 1792. He was the second of Joshua Stevens, a farmer and cobbler, and Sarah Stevens’s four children. Thaddeus had a club foot from birth.

When the kids were still young, his father left the family. He left his wife to raise the kids on her own. Even though Sarah’s family was poor, she was determined to give her kids a good education so they could make better lives for themselves.

Thaddeus went to the Caledonia Grammar School, which is also known as the Peacham Academy. After he graduated, he went to Burlington College of the University of Vermont. Then he went to Dartmouth College in Hanover, New Hampshire, where he graduated in 1814.

After he taught for a while, he went to Danville to study law with Judge John Mattocks. Eventually, he was allowed to join the Maryland bar.

He moved to Gettysburg in 1816 to work as a lawyer there. He was very against slavery and servitude, and he defended several people who were on the run for free. In the end, his practice did well, and he also went into politics.
In 1833, he joined the Anti-Masonic Party and spent four years in the state legislature. This was the start of his political career. As a politician, he was known for his ability to speak well and his strong beliefs against slavery.

In the 1830s, the movement to end slavery was just getting started, and only a few people, like William Lloyd Garrison, were fighting for it. Stevens’ political career was hurt by his support for the anti-slavery movement, but that did not stop him from fighting for the cause.

At the Pennsylvania constitutional convention in 1837, he fought against denying African-Americans the right to vote. He also refused to sign the 1837 constitution because it had a voting rule that was unfair to black people.

In 1848, Stevens ran for Congress in Pennsylvania’s 8th congressional district and won by a small margin. From 1849 to 1853, he was a Whig in the U.S. House of Representatives. In this role, he was against the Compromise of 1850 because he thought it would lead to rebellion, division, and civil war in the future.

During the 1850s, he became a very well-known leader of Northern abolitionists. But his work in the anti-slavery movement hurt his political career, and in 1851 he quit the Whig party.
He went back to his law practice, which was doing well by this time, and kept working in politics. He joined the Republican Party, which was against slavery, and in 1859, he was elected to Congress.

After the Civil War started, he worked closely with people in the Lincoln administration to make laws that would pay for the war. He was a big reason why the Legal Tender Act of 1862 and the National Banking Act of 1863 were passed. These laws helped get money for the war.

Stevens was on the Joint Committee on Reconstruction after the Civil War. But President Andrew Johnson fought against his work on Reconstruction, so Stevens introduced the resolution to impeach President Johnson. He was even in charge of the committee that wrote the articles for impeachment.

In December 1865, Stevens began making drafts of what would become the Fourteenth Amendment. The Emancipation Proclamation of 1863 and the Thirteenth Amendment, which ended slavery for good in 1865, set free many black people who had been slaves.

The Fourteenth Amendment was put forward to give these former slaves equal rights as citizens and equal protection under the law. It was finally passed as one of the Reconstruction Amendments on July 9, 1868.

Thaddeus Stevens was a radical politician who fought hard to end slavery and pushed for equal rights for African-Americans. He pushed Congress to pass a constitutional amendment to end slavery, which led to the Thirteenth Amendment, which made slavery illegal. As a result of his efforts, the Fourteenth Amendment, which gave former slaves equal rights and citizenship, was passed with a lot of help from him.

Thaddeus Stevens never married. It was said that he had a long-term relationship with his African-American widowed housekeeper Lydia Hamilton-Smith. After their parents died, he took in two of his nephews and raised them as his own.

In his later years, he was sick, but he kept working in politics even though his health was getting worse. On August 11, 1868, he died. Shortly before he died, he asked to be buried in the Shreiner-Concord Cemetery in Lancaster, Pennsylvania, because it was a place where people of all races could be buried.

Thaddeus is on the list of the most popular and wealthiest politicians. Based on what we know and what Wikipedia, Forbes, and Business Insider say, Thaddeus Stevens is worth about $1.5 million.