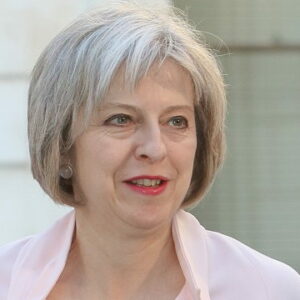 More Facts of Theresa May

Theresa May is a British politician who served as Prime Minister of the United Kingdom from July 2016 to July 2019. She is the former leader of the ‘Conservative Party.’ From 2010 until 2016, she also served as the Secretary of State. May, the country’s second female prime leader after fellow Conservative Margaret Thatcher, is a seasoned politician who succeeded David Cameron as Prime Minister of the United Kingdom at a moment of political turmoil following Britain’s exit from the ‘European Union.’ May was ambitious from the start, being the daughter of a ‘Church of England’ minister. She attended ‘Holton Park Girls’ Grammar School’ before attending ‘Oxford University’ and ‘St Hugh’s College’ to study geography. She went into banking and joined the ‘Association for Payment Clearing Services’ a few years later. She entered politics in the 1980s and served for eight years as a councillor for the London Borough of Merton. She attempted unsuccessfully to be elected to the ‘House of Commons’ in 1992 and 1994, as her political ambitions grew. Her political career took a turn for the better after she was elected as the Member of Parliament for Maidenhead in the 1997 general election. She is a staunch supporter of same-sex marriages and has strong views on immigration rules as a politician.

Theresa Mary May was born in Eastbourne, England, on October 1, 1956, parents Zaidee Mary and Hubert Brasier. Her grandpa was a cavalry sergeant major and her father was a ‘Church of England’ clergyman who served as the vicar of Wheatley.
She went to a variety of schools as a young girl, including ‘Heythrop Primary School,’ ‘St. Juliana’s Convent School for Girls,’ and ‘Wheatley Park Comprehensive School.’
She subsequently went on to the ‘University of Oxford,’ where she studied geography at ‘St Hugh’s College,’ earning a BA in 1977.

Career of Theresa May

She began working for the ‘Bank of England’ after graduation, a position she retained until 1983. From 1985 to 1997, she worked for the ‘Association for Payment Clearing Services’ as a financial consultant and senior advisor in international relations.
Theresa May began her political career in 1986 as a councillor in Merton, where she served as Chairman of Education (1988–90) and Deputy Group Leader and Housing Spokesman (1992–94).
She aspired to be a politician, and in the 1992 general election, she ran for a seat in North West Durham. This attempt, like her bid to win the 1994 Barking by-election, was unsuccessful.
She ran again in the 1997 general elections, and was elected as the Conservative Member of Parliament for Maidenhead. She joined Conservative politician William Hague’s front-bench Opposition team in 1998 and served as the shadow spokesman for schools, disabled people, and women until June 1999.
In 1999, she was appointed to the ‘Shadow Cabinet’ as the Shadow Education and Employment Secretary. Following the 2001 election, Iain Duncan Smith, the new Conservative leader, moved her to the Transport ministry.
May became the first female chairman of the ‘Conservative Party’ in July 2002, after being a well-known politician at the turn of the millennium. Following Michael Howard’s election as Conservative Party and Opposition Leader in November 2003, she was appointed Shadow Secretary of State for Transport and the Environment the following year. She was named Shadow Secretary of State for the Family in 2004. She was appointed Shadow Secretary of State for Culture, Media, and Sport in 2005. David Cameron appointed her as Shadow Leader of the House of Commons in December 2005.
Her career took off in the years after that, and in 2010, Prime Minister David Cameron appointed her as Home Secretary and Minister for Women and Equality. Theresa May was appointed to the ‘National Security Council’ as Home Secretary.
She also reversed numerous of the previous Labour government’s data collection and surveillance policies in England and Wales as home secretary. During her time in office, the ‘Identity Documents Act 2010’ was passed, thereby ending the Labour government’s ‘National Identity Card’ and database project. May, a lawmaker with strong anti-immigration beliefs, committed in 2010 to reduce net migration to less than 100,000 people. She also voted against the European Union’s plan to impose mandatory refugee quotas.
From 2010 until 2012, she served as both the home secretary and the Minister for Women and Equality.
Following the outcome of the ‘European Union’ membership referendum, in which the UK opted to leave the ‘European Union,’ Prime Minister David Cameron announced his resignation in June 2016. Following Cameron’s resignation, Theresa May declared her candidacy for the ‘Conservative Party’ leadership.
Amber Rudd, Chris Grayling, Justine Greening, Jeremy Hunt, Michael Fallon, and Patrick McLoughlin were among the cabinet ministers that backed Theresa May. Following a successful election and the resignation of another possible candidate, Andrea Leadsom, she was named leader of the ‘Conservative Party’ on July 11, 2016.
On July 13, 2016, Theresa May was elected Prime Minister of the United Kingdom, becoming the country’s second female Prime Minister following Margaret Thatcher.
May stated in a ‘Trident debate’ in the ‘House of Commons’ in July 2016 that the UK will not hesitate to deploy nuclear weapons for national security reasons. She was also in favor of the Saudi-led intervention in Yemen.
May announced in 2017 that an early general election would be held in the best interests of the UK’s security. She gained a two-thirds majority in the first snap election held under the ‘Fixed-term Parliaments Act 2011’. She then delivered the Conservative manifesto in Halifax, promising major reforms to the budget, infrastructure, social care, and New Sovereign Wealth Funds.
When she took office for the second time, May ordered a full public investigation into the ‘contaminated blood scandal’ of the 1970s and 1980s, which resulted in thousands of people contracting hepatitis C and HIV/AIDS. The ‘Infected Blood Inquiry’ became the UK’s largest public inquiry, with over a thousand crore participants.
May had already suffered multiple setbacks over her stance on Brexit from the ‘European Union’ by early 2018. May’s cabinet was charged with contempt of Parliament on December 4, 2018, for failing to provide any legal advice on the UK’s exit from the ‘European Union.’ Following that, the government agreed to make the whole legal opinion on Brexit public. May’s handling of the UK’s exit from the ‘European Union’ drew widespread criticism, and on December 12, 2018, she was subjected to a ‘vote of no confidence’ in her leadership. May announced her resignation as the head of the ‘Conservative Party’ on May 24, 2019, after her ‘European Union’ withdrawal agreement bill was poorly received by her party. She also stated that she would continue to serve as Prime Minister until a new one is nominated. May stepped down as Prime Minister on July 24, 2019, and was replaced by Boris Johnson, her former Foreign Secretary.

Major Projects of Theresa May

From 2010 to September 2012, Theresa May served as Minister for Women and Equality. She backed the ‘Anti-Discrimination Laws,’ which were incorporated in the ‘Equality Act 2010,’ which went into force on October 1, 2010 in England, Wales, and Scotland.
May, a proponent of same-sex marriage, voted in favor of the ‘Marriage Bill,’ which legalized same-sex marriage in England and Wales in May 2013.

Theresa May was named one of the ‘Fawcett Society’s Inspiring Women’ of 2006 by the ‘Fawcett Society.’
The ‘Freedom of the City of London’ honor was given to her.
She was named Britain’s second-most powerful woman by BBC Radio 4’s ‘Woman’s Hour’ in February 2013.
On November 30, 2014, she was awarded an Honorary Doctorate by the ‘World Sikh University.’
In September 2017, ‘Forbes’ named her the second-most powerful woman after Angela Merkel. In 2017, she was awarded the ‘Special Class of the Order of King Abdulaziz.’

When she was a student, she met Philip May and married him in 1980. Due to medical issues, the couple was unable to conceive children. Her husband works as an investment banker for the firm ‘Capital International.’
Theresa May is a devout Christian who attends church on Sundays and is a member of the ‘Church of England.’

Theresa May is recognized for her love of fashion, particularly unique shoes. She wore leopard print shoes to both her ‘Nasty Party’ address in 2002 and her farewell Cabinet meeting as home secretary in 2016.