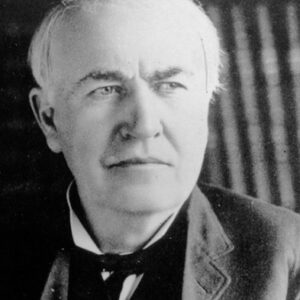 His is a rags-to-riches tale, in which he transformed himself from a “confused” young man to the world’s most well-known and respected American, among many others. In the world of science and technology, Thomas Alva Edison is a name to be reckoned with. He was the mastermind behind countless discoveries and breakthroughs that helped create America’s economy. He was a prolific inventor and a renowned businessman. He was the forerunner in America’s first technological revolution because of his brains, ideas, hard work, and tenacity. Edison is credited with laying the groundwork for the current electric world. His ideas and innovations laid the groundwork for industries and made life more pleasant for humans. Edison is credited with various innovations, including the stock ticker, phonograph, first practical electric light bulb, motion picture camera, mechanical vote recorder, and a battery for an electric car, with about 1093 US patents and many more patents in other countries.

Thomas Edison was the youngest of seven children born to Samuel Ogden Edison, Jr and Nancy Matthews Elliott. His mother worked as a teacher while his father was an exiled political figure.
Edison’s formal education lasted only approximately 12 weeks, which is remarkable. Following that, it was his mother’s obligation to teach him at home. He was an avid reader who read widely on a variety of topics and quickly formed the habit of self-education.
He had experienced hearing problems since a young age, which worsened with maturity until he was nearly deaf by his middle years. This deafness is thought to be caused by scarlet fever.
He used to sell newspapers to travellers on the Grand Trunk Railroad line in his early years. Because of his easy access to current information, he decided to launch his own newspaper, the Grand Trunk Herald, which quickly became a popular publication among the general public. It was also the start of many future business undertakings for him.
He set up a small laboratory in one of the train’s luggage cars and did chemical experiments in addition to selling newspapers. Unfortunately, one of the experiments went wrong, and the car caught fire. This put an end to his pursuits for the time being.
His life was transformed forever when he saved the life of an infant from a near-tragic accident. The child’s indebted father taught him how to operate a telegraph. In Stratford Junction, Ontario, he got his first job.
He worked for numerous organizations around the Midwest until landing a job with the Associated Press bureau news wire. He was quickly sacked, though, for conducting experiments during working hours.

He relocated to New York and began working as an inventor. A stock ticker was one of his first innovations. The Gold and Stock Telegraph Company, impressed by the machine’s operation, offered him $40,000 for the rights. He patented the electric vote recorder in 1869, the first of a long line of inventions.
After that, he moved to Newark, New Jersey, where he established a small laboratory and hired machinists. Experiments on the telephone, phonograph, electric railway, iron ore separator, electric lighting, and other new inventions dominated the 1870s decade. He grew his business and relocated to Menlo Park, New Jersey. The phonograph, which he invented in 1877, was the one innovation that gave him his first burst of popularity and rocketed his stature to new heights. The gadget assisted in sound recording but had flaws, so he continued to work on it until the ‘Perfected Phonograph’ was ultimately released a decade later.

The money he made by selling the quadruplex telegraph to Western Union not only helped him achieve his first financial success, but it also enabled him establish the Menlo Park Laboratory for further scientific improvements and invention.
He invented the carbon microphone in 1877, which is now used in telephones, radio broadcasts, and public address systems.

Moving on, he worked on the electric bulb, which had previously become the subject of research by a number of innovators. He is credited for creating the first commercially viable incandescent light bulb, which was free of all the defects that previous bulbs had.
In New York City, he founded the Edison Electric Light Company in 1878. He showed off his incandescent light bulb for the first time the following year. Columbia, the new streamer of the Oregon railroad and Navigation Company, was the first commercial application of the bulb.

After receiving the patent for the light bulb in 1880, he created the Edison Illuminating Company with the goal of distributing electricity to towns all over the world.
At Pearl Street Station, the company’s first investor-owned electric utility was established. The unit was in charge of supplying 59 clients with 110 volt direct current. The first standardized incandescent electric lighting system using overhead wires was installed in Roselle, New Jersey, in 1883. By 1887, the United States had built 121 power plants that provided electricity to clients. Fluoroscopy, two-way telegraph, kinetoscope, and other technologies he worked on during this time period.
He then established an industrial research facility in West Orange, New Jersey, which served as the Edison lighting firms’ primary research laboratory. He worked on the creation of lighting technologies, improved the phonograph, developed motion picture cameras, and established the alkaline storage battery at the West Orange laboratory.
He quickly transitioned from inventor to manufacturer and business manager at the turn of the century. During this time, his main focus was on developing a viable storage battery that could power an electric vehicle.
Henry Ford, a friend and admirer, was the first to invent a self-starter battery for the Model T. The idea was a huge success, and the automobile industry used it widely for decades.
During World War I, he became the head of the Naval Consulting Board. He worked on programs that essentially designed defensive weaponry, such as submarine detectors and gun-location techniques, as a firm believer in nonviolence.
His most recent US invention, number 1093, was for an apparatus for holding items during the electroplating process.

He holds 1093 US patents and is credited with various inventions that have made significant contributions to mass communications and telecommunications. The stock ticker, phonograph, first practical electric light bulb, motion picture camera, mechanical vote recorder, and a battery for an electric car are among his many accomplishments.

For his selfless service to humanity, he was honored with various medals and awards. Among them are the ‘Officer of the Legion of Honour’ award from France, the Distinguished Service Medal from the US Navy, and the Congressional Gold Medal from the US Congress.
He was inducted into the Entrepreneur Walk of Fame and the New Jersey Hall of Fame. He was made an honorary member of the Royal Swedish Academy of Sciences, the Louisiana Purchase Exposition World’s Fair, and the National Academy of Sciences, among others.
He was awarded the John Scott Medal, the Edward Longstreth Medal, the John Fritz Medal, the Franklin Medal, and the Edison Medal, among others. National Inventor’s Day is observed on his birthday.

In his lifetime, he married twice. In 1871, he married Mary Stilwell, with whom he had three children. Following the terrible death of his first wife in 1884, he married Mina Miller for the second time two years later. They had three children together.
After suffering from diabetes problems, he passed away on October 18, 1931. In Glenmont, West Orange, New Jersey, he was laid to rest behind his home.
People all throughout the world were saddened by his death, and many switched off or dimmed their lights in honor of him.
Several schools, universities, institutions, museums, memorials, parks, buildings, and bridges have been named after this great inventor to honor his accomplishments. The town of Edison, New Jersey, which bears his name, is the most renowned of these.

The prolific inventor who gave the world the first practical electric light bulb, known as the ‘Wizard of Menlo Park,’ suffered with hearing loss since childhood and was deaf as an adult.