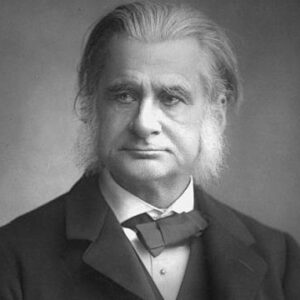 Thomas Henry Huxley was a famous English biologist who became famous in the 1800s. His father could not send him to school because he was born into a poor family. So, he started to teach himself. He was good at science because he had an open mind and thought for himself. When he was only 26, the Royal Society recognized his work and gave him an award for it. He didn’t believe the Bible’s story of how the world was made, so he backed Darwin’s theory of evolution. Based on research and reason, his contribution to the study of marine biology, geology, and the study of invertebrates is of great value. He made biology a subject taught in universities, raised the status of the School of mines and zoology, and brought the issue of adult education to the forefront. He was called a materialist because he didn’t believe in God, but he supported reading the Bible in schools because he thought the Bible’s important moral lessons and beautiful language were relevant to English life. Many European countries gave him honorary degrees and titles for his work to help people learn about science. He will always be known as one of the first people to think scientifically.

Thomas Henry Huxley was born in Ealing, Middlesex. His father, George, taught math at Ealing School, and his mother, Rachel Withers, was a nurse. He was the second youngest of his family’s eight kids.
After Ealing School closed, his family had trouble making ends meet, so he had to quit school when he was ten years old. He started to learn about them and became an expert on them.

In 1841, he went to Sydenham College and won a silver medal in the annual competition for pharmacists. Then, to continue his education, he went to Charing Cross Hospital, where he got a scholarship.

He went to the University of London for his first M.B. exam and got gold medals in anatomy and physiology. But he did not show up for his second exams, so he did not get his degree.

In 1845, he tried to get a job in the Royal Navy. His work experience and test scores were enough to get him hired, and he became Assistant Surgeon on HMS Rattlesnake.
In 1846, the ship Rattlesnake left England for a trip to New Guinea and Australia. He sent his findings of marine invertebrates to his mentor, Edward Forbes, to get them published.

In 1849, he wrote a paper called “On the Anatomy and the Affinities of the Family of Medusae.” In it, he put the Hydroid and Sertularian polyps together with the Medusae to make a class he called “Hydrozoa.”
After he went back to England in 1850, he was named a “Fellow of the Royal Society” for his work and met Joseph Dalton Hooker and John Tyndall, who became his lifelong friends.

The Navy kept him around so he could study the things he found on his trip. In 1851, he showed that both Appendicularia and Ascidians are tunicates and are related to the vertebrates in the phylum Chordata.
In 1854, when he was a professor of natural history at the Royal School of Mines, he worked on vertebrate paleontology and many other projects to make science a bigger part of life in Britain.

In 1855, he gave six talks at the Royal School of Mines. In them, he said that he hoped the working classes would realize that science and its ways are good for them and that they should follow them.

In 1860, he argued for the theory of evolution at the Oxford Evolution Debate, while Bishop Samuel Wilberforce argued against it. People thought that the debate was a win for Darwinian ideas and scientific ways of thinking.

In 1864, he started the “X Club,” a group of his best friends who got together to eat and work for science. Charles Darwin was one of the people who sometimes went to the club.

In 1868, he gave a talk called “On a Piece of Chalk” to Norwich’s working class. This talk helped other scientists explain how life started on Earth.

Between 1855 and 1890, he was a Professor at the Royal College of Surgeons and the President of the British Association for the Advancement of Science, the Royal Society, and the Marine Biological Association.

In his famous 1869 essay, “On the Physical Basis of Life,” Huxley said that life and even thought were based on molecular events. He made up the word “agnostic” to describe how he felt about religion.

In 1893, his “Collected Essays” came out in nine volumes, with titles like “Method and Results,” “Darwiniana,” “Science and Education,” “Science and Hebrew Tradition and Christian Tradition,” and “Evolution and Ethics and Other Essays.”

He was the youngest person to get the Royal Medal, which was given to him in 1852. He was a Fellow of the Royal Society.

Between 1876 and 1894, he won the Copley Medal, the Darwin Medal, the Wollaston Medal from the Geological Society, and the Linnean Medal for his work in taxonomy and natural history.

For his work in the public sector, he was given honorary degrees and awards. In 1892, he was made a Privy Councilor, and the King of Sweden made him a Knight of the Order of the Polar Star.

Thomas Huxley got married to Henrietta Anne Heathorn, whom he met in Sydney, in 1855. There were five girls and three boys in the family. Noel, his oldest son, died when he was only four years old.

Biographers have said that many of the biologist’s family members had mental illnesses, including his father, brothers, and a daughter. He himself was depressed while he was on the HMS Rattlesnake.
In 1895, he died of a heart attack.

Thomas is on the list of the most popular and wealthiest biologists. Thomas Henry Huxley’s net worth is about $5 million, according to our research, Wikipedia, Forbes, and Business Insider.

This famous British zoologist fought hard for Darwin’s theory of evolution. He was known as “Darwin’s Bulldog” because of this.
This famous, agnostic, and controversial zoologist was the grandfather of the author of the book “Brave New World.”