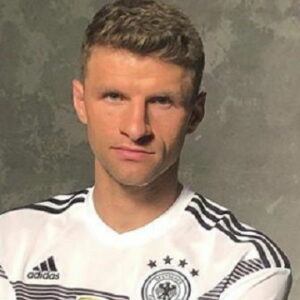 Thomas Müller is a professional footballer from Germany who is noted for his goal-scoring prowess and versatility on the field. He is regarded as a gifted all-rounder capable of playing as an attacking midfielder, a center striker, or a winger. His technique, great dribbling skills, and precise passing ability have earned him praise. He’s well-known for his excellent positioning. He was born and reared in West Germany, and he began playing football at an early age. He joined the local ‘Bundesliga’ team ‘Bayern Munich’ when he was ten years old and progressed through their junior system. He has also represented Germany’s ‘Under-19’ and ‘Under-21’ teams. While playing in the ‘Championship League,’ he has received awards such as the ‘Bundesliga Player of the Month.’ For his outstanding performance at the ‘FIFA World Cup’ competitions, he has received numerous prestigious trophies and accolades, including the ‘Golden Boot,’ the ‘Best Young Player,’ and the ‘Silver Boot.’ According to ‘The Guardian,’ he is the world’s sixth best player. Müller is married to semi-professional equestrian Lisa Trede.

Müller was born in Weilheim, Oberbayern, West Germany, on September 13, 1989, to Klaudia and Gerhard Müller. He grew up in the village of Pähl, which is close to his birthplace. Simon, his younger brother, is his only sibling.
He joined the local ‘Bundesliga’ team ‘Bayern Munich’ in 2000. He received his training as part of the club’s youth system. With ‘TSV Pähl,’ he began his youth career.

He was a member of the ‘Bayern Munich’ young team that placed second in the ‘Under-19 Bundesliga’ in 2007. He made his entire debut for ‘Bayern Munich’ in a ‘Bundesliga’ match against ‘Hamburger SV’ in August 2008. In 2010, he joined the German national team.

In November 2009, however, he was a member of the ‘Under-21’ team that defeated ‘San Marino’ 11–0.
Louis van Gaal, who was named as Bayern Munich’s new manager in 2009, proved to be a fantastic mentor for Müller. Müller joined the senior team of ‘Bayern Munich’ in February 2009. In March 2009, he made his ‘Championship League’ debut as a replacement for Bastian Schweinsteiger in a ‘Bundesliga’ match against ‘Sporting CP.’ Müller’s debut match was a success for ‘Bayern Munich,’ and the club went on to win additional matches and titles with him on the side. With 13 goals and 10 assists, he was awarded the best ‘Bundesliga’ rookie of the 2009–2010 season.

He scored two goals against Germany’s leading football team, ‘Borussia Dortmund,’ in September 2009. He subsequently went on to win the ‘Bundesliga Player of the Month’ award after scoring two goals against ‘Maccabi Haifa.’

He made his debut for the German national team against Argentina in March 2010. He came on as a substitute for Toni Kroos, but his team was defeated 0–1 in the encounter.
He played in the ‘Supercup’ match against ‘Schalke 04.’ after the 2010 ‘World Cup.’ In the 2–0 victory, he scored the game’s first goal. He earned two penalties and was named ‘Man of the Match’ in Bayern Munich’s inaugural ‘DFB-Pokal’ in the 2011–2012 season. He played his 100th ‘Bundesliga’ match against ‘FC Nürnberg’ in March 2012.
He scored 23 goals to assist ‘Bayern Munich’ win the league title, the cup, and the ‘Champions League’ in the 2012–2013 season. He helped the team win their eighth consecutive game by defeating ‘Fortuna Düsseldorf’ at the start of the 2012–2013 season. He also contributed to his team’s 1–0 victory over ‘Lille.’ ‘Bayern Munich’ won the 2012 ‘DFL- Supercup’ thanks to his effort against ‘Borussia Dortmund.’

He then extended his contract with ‘Bayern Munich’ for another two years. Müller re-signed with ‘Bayern Munich’ after the 2013–2014 season and turned down an offer from ‘Manchester United.’ His performance during the 2016–2017 season helped his team win the 2016 ‘DFL-Supercup’ over ‘Borussia Dortmund.’

Müller scored his first international goal against Australia in the 2010 ‘FIFA World Cup,’ leading Germany to a 4–0 victory. Müller scored a total of 5 goals, the most by any player in the tournament, earning him the ‘Golden Boot.’ Germany finished third in the tournament. That year, he was also named ‘FIFA World Cup Best Young Player’ and ‘World Soccer Young Player of the Year.’

Müller started all ten qualifying matches for Germany in ‘Euro 2012,’ contributing seven assists. The team advanced to the semi-finals but was defeated by Italy.
He scored Germany’s opening goal against Kazakhstan in the 2014 ‘FIFA World Cup’ qualifiers. In Germany’s first match, against Portugal, he scored his first hat-trick and led the team to a 4–0 victory. He was named ‘Man of the Match’ for his efforts. He was also named to the ‘World Cup All-Star’ team and the ‘World Cup Dream Team,’ among other honors. In the semifinal encounter against Brazil, he scored the game’s first goal, leading Germany to a 7–1 victory.

Müller is only the third player in history to score at least five goals in both of his ‘World Cups.’ Germany won the 2014 ‘FIFA World Cup’ thanks to his performance. He received the ‘Silver Boot’ for being the tournament’s second-highest scorer and the ‘Silver Ball’ for being the tournament’s second-best player.
In 2016, he represented Germany at the UEFA Euro, where his side advanced to the semi-final stage. He did not, however, score throughout the competition.

Müller is a practicing Catholic. He married his long-time lover Lisa Trede in December 2009 after two years of engagement. She is a semi-professional equestrian and works on a farm.
He supports young children who have experienced trauma or grief through the nonprofit ‘YoungWings.’

Thomas Muller has a net worth of $12 million.