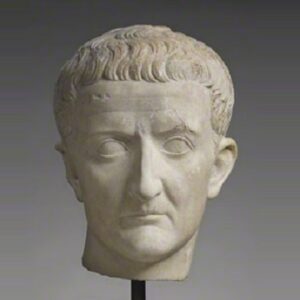 Tiberius was a Roman Emperor who ruled for a long time and was recognized for his military prowess. He was fourth in line to the throne and was entrusted with significant responsibilities from an early age, having been born into an aristocratic family. Tiberius was first entrusted with administrative duties, but he quickly rose to become a strong military commander. Between military engagements, he held major administrative positions and commanded a succession of victorious campaigns in various parts of Europe and beyond. Despite his success, he was never content, owing to his estrangement from his first wife Vipsania. At the height of his authority, he stunned the world by relocating to Rhodes and abandoning all of his obligations. However, the untimely deaths of the heirs to the throne resulted in Tiberius’ return to Rome, as well as his return to authority positions he had never occupied before. His succeeding administration was marred by his indecisiveness and disinterest, making him unpopular with the people. He started shirking his obligations once more and departed Rome, this time leaving his close ally Sejanus in control. He still had tremendous influence, which he used to put Sejanus and his followers to death for treason. Although Tiberius was hardly the best Roman emperor, he fared far better than his successors, who plunged Rome into chaos and decadence.

He rode in a chariot with his father Octavian to celebrate the triumph against Antony and Cleopatra at Actium when he was twelve years old.

Tiberius, being seventeen years old, was appointed as a ‘quaestor,’ a public officer in charge of financial issues, by Emperor Augustus in 24 BC.

As a prosecutor, he was successful in convicting Fannius Caepio and Varro Murena of high treason. He was also involved in other administrative tasks such as grain supply regulation and slave barracks inspection.

He led armies to Armenia and crowned Tigranes as emperor in his first military campaign, and he also accompanied Augustus to release Roman flags from the Parthians.

He was appointed a ‘praetor,’ or army leader, upon his return from the east. He was then dispatched to subjugate the Gauls. When he returned to Rome in 19 BC, he was appointed consul.

In 12 BC, he was assigned to combat conflicts in Germany. He kidnapped roughly 40,000 people and transported them to Gaul.

In 7 BC, he returned to Rome and assumed the title of ‘Consul.’ The following year, he was given the ‘tribunician power,’ which greatly strengthened his power.

Tiberius and his general Gaius Sentius Saturninus raided the Germanic tribe of ‘Marcomanni’ in 6 BC with two-pronged attacks.

Tiberius returned from his self-imposed exile in Rhodes in 2 AD, but without the powers, he had previously. Following the death of Augustus’ grandson Gaius in Armenia, he was restored to his rule after two years. Tiberius was also adopted as Augustus’ entire son and successor.

He was given administrative powers equal to those of the emperor in 12 AD. Augustus died two years later, and Tiberius, as his heir, became the sole ruler.

Tiberius’ first years as emperor were challenging because the Senate did not trust him. He sought to portray himself as a hesitant and selfless king, but his reputation suffered as a result.

During this time, he implemented a number of reforms. He reined in excesses, outlawed Egyptian and Jewish cults, expelled astrologers, put an end to disturbances, and took away the right of sanctuary.

Two northern legions in ‘Pannonia’ and Germania began mutinying soon after his ascension. To put down the revolts, Tiberius dispatched his nephew Germanicus, whom he had also adopted. Germanicus allied with the insurgents and expanded his conquests in Germany.

Tiberius handed Germanicus authority over the eastern provinces after his victories. Germanicus, on the other hand, died of poisoning in 19 AD under unknown circumstances.

In the years that followed, Tiberius delegated numerous powers to Sejanus, the long-serving Praetorian Prefect, and his own involvement in state affairs decreased as a result of his apathy.

He neglected his civic responsibilities and went on annual vacations. Finally, in 26 AD, he moved from Rome to Capri, leaving Sejanus as the sole ruler.

Sejanus’ thirst for more power led him to plot the overthrow of Tiberius and the merciless execution of his rivals. Tiberius of Capri, after learning of Sejanus’s deeds, ordered his execution in 31 AD. He also punished anyone who had a connection to Sejanus.

Tiberius named Caligula, his adopted grandson, and Tiberius Gemellus, his real grandson, as heirs in his testament.

Tiberius launched an army into Armenia before his accession to convert it to a Roman client-state and thereby cease the border threats.

He was able to reach an agreement in which the Romans received the standards and Armenis were allowed to remain a free state. He personally oversaw King Tigranes’ coronation.

Tiberius was victorious in a campaign in Germany in 12 BC, taking roughly 40,000 prisoners with him. The convicts were then liberated and moved to new regions in Gaul.

By allying with Gaius Sentius Saturninus, he annexed Marcomanni. General Gaius assaulted from the west, while Tiberius attacked from the east.

The fight was easily won by the Romans. But Tiberius was summoned to Germany before he could subjugate the Marcomanni.

Tiberius married Vipsania Agrippina, the daughter of General Marcus Vipsanius Agrippa, a close friend of Augustus. ‘Drusus Julius Caesar’ was his only child from this marriage.

Agrippa died in 12 BC, and Augustus forced Tiberius to divorce Vipsania and marry Agrippa’s widow, Julia, the next year.

Tiberius was dissatisfied with his second marriage because he still yearned for Vipsania, and his unhappiness was made worse by Julia’s heinous and licentious behavior. Julia was exiled from Rome in 2 BC, bringing the marriage to an end.

His rule was shaky after his ascent to the throne because he was indecisive. His instructions were ambiguous, and he was unpopular in both the Senate and the general public. After his son’s unexpected death in 23 AD, he became even more reclusive.

While traveling in Campania in 37 AD, he contracted a sickness and was taken to Misenum for treatment, but he died there on March 16, 37 AD, at the age of 78.

This Roman Emperor was a powerful but hesitant ruler who twice went into self-imposed exiles, giving up all of his power in the pursuit of solitude.